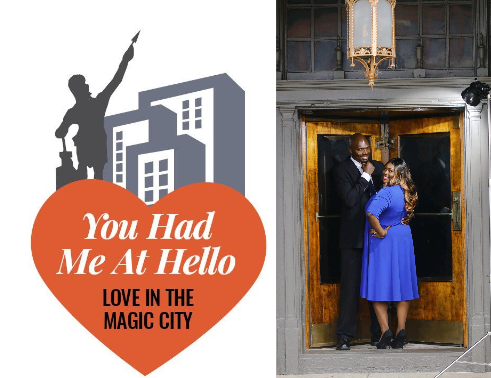 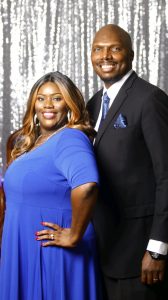 Met: Summer 2000, inside the band room at Sidney Lanier High School in Montgomery. Jonathan had already graduated and completed his freshman year at Alabama Agricultural & Mechanical University, and had returned to campus to say hello to the band director. Juarkena, a majorette, was preparing to enter her senior year.

“I was at my locker thinking about what I was going to eat for lunch. We were in ‘Hell Week’, and we were practicing from sun up to sun down… he walked up to me and . . . we just started talking to each other like we had always known each other and we talked my entire two-hour break.”

Jonathan said with a laugh that he was coming back to his high school alma mater as “the big man on campus. Little did I know that I’d be awestruck that day.”

Juarkena said she gave him her phone number that day and that Jonathan started coming to her band practices every day.

“We were inseparable,” she said. “He was the only guy that could call my house that didn’t cause my parents any grief. My parents loved him from the start.”

First date: Summer 2000 at the Rave movie theater in Montgomery. “It was the first place or date I took her on officially… Coming by to get her wasn’t as daunting as I thought it would be because I had met her parents already, and had spent a lot of time with them.”

Juarkena recalls the walk from the car to the theater.

“He picked a flower for me as we were walking the perimeter of the parking lot and being all extra like we were in a movie scene from ‘The Notebook’. It was a pink buttercup flower. I kept it and the movie tickets and laminated them. I still have them in my [high school] senior yearbook,” she said. “It was so easy and comfortable like we truly had a lifetime together in some previous life… We laughed a whole lot.”

The turn: The pair dated for a couple years, and broke up in 2002 while Juarkena attended the University of Alabama at Birmingham [UAB], but they reunited in 2007. By this point Jonathan was divorced and Juarkena engaged to be married. “He was still in Huntsville, and getting into ministry at the time. He was my very best friend, we were still able to share our dreams with one another… we kept the relationship clean and holy, we were very respectful to each other’s lives,” she recalled.

Juarkena’s marriage at the time was unhealthy and she got a divorce in April 2012.

Jonathan said that he had always prayed positive prayers of restoration for Juarkena and her then husband, but as the divorce was finalized, he received a revelation from God.

“God gave me a scripture about the man dealing with the treasure in the field. When the Lord said Juarkena is your treasure in the field, go buy the whole field, I knew that my job was to be patient and wait,” Jonathan said. “When you buy an entire field, it has potholes, wild animals, it needs grooming … that was my understanding of getting ready for her… a series of things started happening in my life and an opportunity lead me to move from Huntsville to Birmingham.”

The proposal: Summer 2012, at Ruth Chris Steakhouse in Birmingham. Jonathan orchestrated a proposal similar to an inauguration for a U.S. president.

“It was inspired by the inauguration of Obama. I printed up an invitation and itinerary and sent it to her. We spent the entire day together, it started with breakfast, I took her to get a massage, her hair and nails done, we went to lunch at the Olive Garden in Alabaster, and then I took her back to her apartment where I gave her a formal dress I’d bought for her… I had arranged for us to have a private section at Ruth Chris, [the staff] was all in on it. And, just before the meal arrived, I pulled out a nice gold case and went through my entire spiel, and asked her to marry me. The restaurant clapped and it was a beautiful moment,” Jonathan said.

Juarkena remembered the day was a ‘full gamut’ of romantic surprises.

“He’s a really thoughtful person any way, he’s always loved me, and has always taken care of me since I was 17. But to be showered that way ….that day was really a culmination of who he was. I was in disbelief. It was like God, I knew you were good, but I didn’t know you were this good,” Juarkena laughed. “It was everything, it was one of the most beautiful times of my life. He had already talked to my mom (my dad had already passed away). There was nothing left but to do it [get married].”

The wedding: At More Than Conquerors Faith Church, in 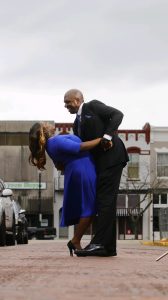 Birmingham, officiated by Senior Pastor Steve Green. Their colors were black and white with red and silver accents.

Most memorable for the bride was the vow exchange. “We wrote our own vows and they were so meaningful. And out of everything I said that I continue to bring up today, especially as he’s pastoring… ‘I realize that I am marrying more than a man, I’m marrying a mantle, and I’m marrying purpose. And I vow to always honor that mantle and always honor that purpose…,” Juarkena said.

The vow exchange was also memorable for the groom. “With them being custom vows, they really do resonate from the heart and our spirit. And in my case, it was more of a focus on remembering how special she was to me and vowing to continue to cover her, be a blessing to her, and make sure she lives out her purpose. I will always do my part in doing exactly that,” Jonathan said. “I remember tearing up too, especially as she walked in in her dress.”

The couple honeymooned in Cancun, Mexico.

“We enjoyed the experience of being away on the water. It’s a frequent place of prayer for us, and being together in such an intimate space on the water was really endearing,” Juarkena said.

Words of wisdom: The power of constant romance is important, Jonathan said.

“We as Christians, tend to shy away from talking about romance and sex and how important it is to prepare for these things. It was important for the biblical writers to keep the Song of Solomon in the Bible, because otherwise, I don’t know how well we’d deal with romance… keep on dating, keep on romancing, keep talking to each other like you just met and keep using those flirtatious words and actions, even in the midst of all the demands of life,” he said.

Juarkena said it’s important to build a marriage on the foundation of friendship.

“It’s what keeps us when things get difficult, when life happens because life happens to everyone, when the days are long, when the kids aren’t conforming and things aren’t falling into place, when the unexpected happens… all of that stuff that rolls into marriage.”

She added: “Also, if you find yourself being strained or pulled away from each other, find time to reconnect… At the end of the day [your spouse] is your friend who you can be vulnerable with, and if I can’t give him the clear, naked, ugly truth of who I am, who can I do that with?

Happily ever after: The Pitts have four children, daughters: Aislinn, 15, Kristalyn, 11, and Jasmynne, 1, and son, Priest, 5.

Juarkena, 37, is a Montgomery native and graduate of Loveless Academic Magnet Program [LAMP] of Sidney Lanier High School in Montgomery, Ala. She attended the University of Alabama at Birmingham [UAB], and later earned a Bachelor of Arts degree in communications from Southern New Hampshire University [Manchester, New Hampshire]. She works at BBVA USA, where she serves as Vice President, and Team Lead of The New Digital Business Compliance Division.

Jonathan, 38, born on a military base in Turkey, settled in Montgomery during his teen years. He graduated from Sidney Lanier High School, and Alabama A&M where he earned a Bachelor of Science and Master’s degree in computer science. He works as a project manager in the technology department of Regions Bank, and is pastor of Ambassadors for Christ Church in Huntsville.