MONDAY…
**MO MONEY MONDAYS at the Eastside Lounge.
**BIRMINGHAM BANDSTAND at The Nick Rocks.
**THE BIRMINGHAM MOTH STORYSLAM at Saturn.

NEXT WEDNESDAY…
**COMEDIAN MIKE PARAMORE at the StarDome Comedy Club.
**MOLLY O’ MALLEY and WELLS ADDINGTON at the Nick.

NEXT THURSDAY…
**THE PROF.FUZZ 63, THE TWIN HEART TRAP, THE PAINFUL REMINDERS and THE HIGH FIDELICS at the Nick Rocks.
**EOTO, LYKWID and BIOLUX at Saturn.
**COMEDIAN MIKE PARAMORE at the StarDome Comedy Club.
**THURSDAY NIGHTLIVE with VOCALIST ABRAHAM TH E VOICE at the Perfect Note.

CELEBRATING WOMEN’S HISTORY MONTH
…March is Women’s History Month and this year 2020 is the 100th Anniversary of the ratification of the 19th Amendment, granting some women the right to vote. Celebrating Women!.
**NINA MIGLIONICO – The film: STAND UP SPEAK OUT – THE NINA MIGLIONICO STORY will be shown at the Homewood Library, Sunday at 3 p.m. FREE. The film is a portrait of one of the first female lawyers in Alabama and the first woman to sit on the Birmingham’s City Council.  Miglionco fought tirelessly for segregation reform and equal rights for women in the face of adversity in the 1960’s and beyond.  Miglionco was called one of Birmingham’s original Wonder Women. The film is directed and produced by Birmingham attorney JENNA M. BEDSOLE.  The film aired at the Sidewalk Film Festival and the Alabama Public Television. It has been screened in several venues locally.  After the film, Ms. Bedsole will offer a Q & A.  This is a great opportunity to introduce girls to a Birmingham Icon who pave the way.

(Photo: SWV)
2020 UNCF MAYOR’S MASKED BALL – The Annual UNCF Mayor’s Masked Ball is Saturday 5:30 p.m. – 6:30 p.m. VIP Pre-Ball and Silent Auction and 7 p.m. Dinner, Awards Presentation, Parade of Masks and Live Entertainment, at the Sheraton Birmingham Hotel. TWENTY 3 Entertainment presents SWV, the entertainment for the evening.  Co- Chairs of the 2020 UNCF Mayor’s Masked Ball are KEVIN LILES, CEO of 300 Entertainment, ERIKA LILES, Co-Founder at Everyhue Beauty and CAROL MCELHENEY, the Regional Vice President of the Hudson Group.    SWV (SSISTER WITH VOICES) performing at the UNCF Mayor’s Masked Ball is an American R&B vocal trio from New York City, New York whose members are Cheryl (Coko) Gamble, Tamara (Taj) Johnson and Leanne (Lelee) Lyons. Formed in 1988 as a gospel group, SWV became one of the most successful R&B groups of the 1990s. They had a series of hits, including “Weak”, “Right Here (Human Nature Remix)”, “I’m So Into You”, and “You’re the One”. The group disbanded in 1998 to pursue solo projects and reunited in 2005. SWV has sold more than 25 million records worldwide. The UNCF YPAC AFTER PARTY is 9 p.m. – 12 a.m. at the Westin Hotel Ballroom presented by V94.9 Courtney French Broadcasting with DJ CHRIS COLEMAN on crowd Control Attire. It is Black Tie and open to the public with a Donation of $25 for those that do not attend the Ball.

AT THE BIRMINGHAM ZOO…
**BIRMINGHAM ZOO MOURNS RED PANDA – The Birmingham Zoo is mourning the passing of Parker, the Zoo’s 4-year-old male red panda. Parker was found deceased Sunday morning with no obvious physical injuries or any indication of illness. Birmingham Zoo veterinary staff performed a necropsy (post-mortem exam) on Parker, which did not reveal an obvious cause of death, and are awaiting further testing. “The passing of Parker red panda is a devastating loss for not only our staff and volunteers but also for our guests who loved him,” says Birmingham Zoo President & CEO, Chris Pfefferkorn. “Parker was an amazing red panda and a beloved member of our Zoo family. He always received the best care and attention from our Animal Care staff, and he was quite adept at participating in husbandry training and learning new behaviors that greatly assisted with his care. Parker holds a special place in our hearts, and he will be deeply missed.” The Birmingham Zoo is also home to a 9-year-old female red panda named Sorrel, who Zoo Animal Care Professionals and the veterinary team report is doing well with no indications of illness.
**BIRMINGHAM ZOO RECEIVED GRANT – The Birmingham Zoo has been awarded a $50,000 grant for the second year in a row from the Trinka Davis Foundation. The grant will provide free general admission to the Zoo for military personnel (Active/Retired/Veteran/Reserve) and their dependents on Memorial Day weekend (May 23-25), Fourth of July weekend (July 3-5) and Veteran’s Day (November 11).

FOR THE COMMUNITY…
**CENTRAL ALABAMA HIGH SCHOOL CAREER FAIR – The 2020 Central Alabama High School Career Fair is hosted by the Alabama College and Career Access Program (ACCAP) April 9 at the BJCC South Meeting Room, 9 a.m. – 2 p.m. Be sure to register your company for Central Alabama’s Job Fair for High School Seniors. Contact Ezra E. Shine, ACCAP at (205) 266-1740 for more Corporate Registration information.
**FOX 6 KIDS & JOBS – The City of Birmingham Mayor’s Office Division of Youth Services (DYS) and FOX6 launch the 2020 Kids & Jobs Program. Kids & Jobs is designed to help cultivate the professional development necessary for youth and young adults to become an integral part of the workforce.
EXPOSURE (14 & 15-Year-Old) PROGRAM  – Participating students will receive first-time exposure to the workplace. The EXPOSURE COMPONENT of the Kids & Jobs Program gives deserving Birmingham youth, who might otherwise not be given the chance, an opportunity to experience the workplace for the first time.
SUMMER EXPLORER PROGRAM – The SUMMER EXPLORER PROGRAM provides high school students 16 years of age and older with an introduction to the workforce and a chance to explore one of the various professions offered.
SUMMER EXECUTIVE INTERNSHIP – The EXECUTIVE PROGRAM provides college students up to the age of 24 with a unique opportunity to establish a foundation for their career path. This year SEI students can apply for the Literacy Leaders Program.
(SEI Students majoring in Education or related field)
+Serve as Tutors for Rising 2nd and 3rd graders at area libraries
+Tutors will be trained to be highly-effective reading coaches
+Students will gain valuable work skills and satisfaction changing the lives of children. Applications https://www.bhamyouthfirst.org/ and www.wbrc.com. Applicants must live in the city of Birmingham to participate in the Kids & Jobs Program. For more information about the Kids & Jobs Program, contact DYS at (205) 320-0879.
**MILES COLLEGE NEW ACADEMIC PROGRAMS AND SCHOLARSHIPS – Miles College is aligning its academic programs to meet workforce demands and reduce the financial barriers to completion with the launch of its newest academic programs pending the approval of the Southern Association of Colleges and Schools Commission on Colleges (SACSCOC) and scholarship opportunities starting Fall 2020. The pending academic programs include the College’s first online Bachelor of Science program in Business Administration, a Bachelor of Science degree in Psychology, and a minor in Game Design offered through the Computer and Information Science degree program. In addition to the new academic programs, Miles College recently restructured a variety of scholarships that will assist prospective students in financing their education. Most notably, high school and community college graduates with a 2.75-grade point average are awarded a $2,500 scholarship renewable for three years. There is no ACT/SAT requirement to receive this scholarship, and all students who gain admission to the College and meet the minimum qualifications will be awarded. The application process for Fall 2020 is currently open, and applications are accepted on a rolling basis at www.miles.edu. For more information on scholarships, please call the Office of Admissions at 205-929-1656.
**NEW A.G. GASTON BOYS & GIRLS CLUB OPENS – A community open house is set for March 21st. The Howlett Clubhouse will offer several new features not currently present in the Balton Clubhouse – a dedicated Teen Center, a Café with a connected teaching kitchen and a permanent Performance Space. The first floor of the new clubhouse will be dedicated to the developmental needs of youths ages 6-12, while the second floor will serve teens ages 13-18.

FOR LOVERS OF ART…
IN BIRMINGHAM…
AT BIRMINGHAM MUSEUM OF ART…
** ALL THINGS BRIGHT AND BEAUTIFUL: CONTEMPORARY GALLERY
All Things Bright and Beautiful opened recently Saturday and brings together works primarily from the Museum’s permanent collection that look at themes of power and agency. This exhibition takes its name from a painting by Amy Sherald, whose portraits depict Black sitters with pride, dignity, and joy, representation historically only afforded to white people. Some artists in the exhibition look towards power in other creative endeavors, like music. Others contemplate the hidden potential of everyday objects by transforming them into works of art. Several artists engage the representation of space and architecture–including museum spaces–to discover the dynamics of power. Considered together, these works illustrate the importance of being seen, choosing how to be depicted, and telling one’s own history.
**SUNDAY…SLOW ART SUNDAY – Slow down for Slow Art Sunday, 2-3 p.m. FREE.  Master Docent Caroline Wingate will lead a discussion on “The Farmers” by Joan Bankemper in the English gallery.
IN TUSCALOOSA…
AT PAUL D. JONES MUSEUM…
**IT’S LIKE THAT: Selections from the Collection of Rebecca and Jack Drake, through April 24 at the Paul R. Jones Museum in Tuscaloosa. The reception is Friday, April 4, 5:30 – 7:30 p.m.
IN YORK, ALABAMA… by way of Birmingham….
AT ALTMAN RIDDICK GALLERY…
**TONY BINGHAM’S EXHIBITION OPENS IN YORK – Tony Bingham exhibition MEMORIAL MEDITATIONS will open at Altman Riddick Gallery, 630 Avenue A Street in York, Alabama 36925. The exhibition will close on Friday, May 22, 2020.

FOR FOOD LOVERS…
**ZANZIBAR BAR AND GRILL…If you love good ethnic food, then Zanzibar Bar and Grill is the place to go every Saturday night. Get your groove on with all kinds of favorite foods from Africa, Caribbean, and more. Enjoy music of all kinds including Caribbean, Soca, African, and Reggae.

FOR COMEDY LOVERS…
AT SATURN…
**UGLY BABY LIVE, Saturday, at Saturn.
AT GOOD PEOPLE BREWING…EVERY FRIDAY…
**FUNNY FREE FRIDAYS (COMEDY SHOW), 9 – 10:30 p.m., at Good People with Birmingham’s finest comedy show at a brewery. It’s free and features the best comedians from around the country.
AT THE STARDOME…
**TODAYTHROUGH SUNDAY… COMEDIAN JOHN MORGAN… John Paul Morgan known as the “Ragin Cajun” was raised in New Orleans, Louisiana. The cultural, political and economic diversity of that city laid the groundwork for his development as a standup comedian. John has headlined comedy clubs all over the world. John’s confident demeanor and honest approach to life is refreshingly original. John dares to talk boldly about real issues. Whether he is speaking about children or relationships, his comedy comes from the heart. So whether it’s a specialized group or a night at the comedy club, this Ragin’ Cajun is as sweet as a honey glazed ham and as hot as a Tabasco chili pepper.
**SUNDAY… COMEDIAN GENESIS – RODO GOES KANYE …This is not an Impersonation or Assassination of Ye’s Character but this is the beginning of a New concept of Talk Show entertainment created in the mind of Rod G. Newman. Host/Actor/ & Conceptual performance Artist; Mr. Newman has redefined and entertained the Creative culture over 15 years with many characters: his One-man show: “Jesus Geek” & his Sketch comedy, “The Newman Show” to name a few….
Now he is back with a new character: ROD GOES KANYE reimagined through the musical art of Kanye. Come Ready to Eat. Drink. & Be Merry!
**WEDNESDAY AND THURSDAY… COMEDIAN MIKE PARAMORE… Mike Paramore is the guy you fight to sit next to in a movie 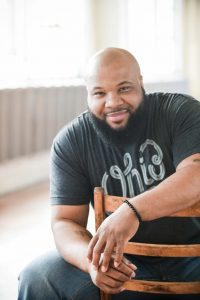 theatre, on a long car ride, or during a boring lecture. ​His natural ability to infuse everyday situations with energetic, uplifting humor, combined with a natural ability to put you at ease is key to his personal brand of comedy. His smooth delivery and​ powerful punchlines make him a force in stand-up comedy,which is very apparent in his debut album “The Things We Tell Ourselves”, available now oniTunes and Amazon.

Well, that’s it. Tell you more ‘next’ time. People, Places and Things by Gwen DeRu is a weekly column. Send comments to my emails: thelewisgroup@birminghamtimes.com andgwenderu@yahoo.com.