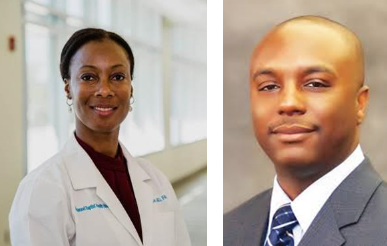 As an eighth grader growing up in Kenner, Louisiana, Jade Brice-Roshell attended a symposium for middle schoolers given by the pre-med program at Xavier University, which led to her attending its summer program.

“I really never looked back after that,” she said.

Brice-Roshell, Chief Medical Officer (CMO) of Shelby Baptist Medical Center and director of Shelby’s Hospitalist Program, is now recognized as one of the leading African Americans in the medical field. For the second consecutive year, she was named to Becker Hospital’s National List of African American Leaders to Know in Health Care.

“It’s an incredible honor because I know there are so many African Americans in health care who are doing some amazing things,” said Brice-Roshell. “I kind of feel gratitude and maybe just a little bit of pressure, like—‘Oh my gosh, now I really have to step it up!’”

And she has been stepping it up since she attended the symposium in middle school.

“I think I really was interested in being [in] some type of service industry,” said Brice-Roshell, who is board certified in internal medicine.

She earned an undergraduate degree in biology from Xavier in 1995, a medical degree from Howard University College of Medicine in 2001, and a Master of Public Health (MPH) degree from the University of Southern Mississippi in 2003. She completed her internship in 2002 and residency in 2004 at Tulane University, and in 2017 she earned a Master of Business Administration (MBA) from Auburn University.

Being named a leader in the medical field isn’t something Brice-Roshell thought about “from a personal standpoint,” but she is humbled by “the fact that somebody else would think that highly of me,” she said.

Before moving to Birmingham in 2015, Brice-Roshell spent four years in Georgia and three years in Nebraska, serving in hospitalist programs for medical centers in each state. She decided to come to Birmingham when the Shelby Baptist director of hospital medical program position was available.

Like most doctors and nearly everyone around the globe, Brice-Roshell said there has been a lot of anxiety when it comes to the COVID-19 pandemic, especially in regard to having adequate personal protective equipment and caring for patients: “Am I going to get sick? Am I putting myself in danger? Am I going to bring something home to my family?”

“Most of us have never been involved with anything like this on such a global level, … nothing on the scope of this,” she said. “I think we’re learning a lot of things kind of on the fly, but we have a lot of great leaders already in place who have really helped us navigate these tough times—especially here at Shelby and Princeton and in this market.”

The pandemic has allowed Brice-Roshell, who has been married for 10 years and has three sons (ages 25, 10, and 7), to spend more time and become more creative with her family. They do a lot together—ride bikes, play games, talk about their days, set up a makeshift tennis court in their driveway, all of which have become welcome diversions, she said, adding that the pandemic has changed her perspective in several ways.

“It’s amazed me, as far as how some of my coworkers and people around town have stepped up … to help out, volunteer, and do things for other people, even when they probably already have their own worries and concerns,” Brice-Roshell said. “It has changed my perspective on pretty much everything we do, even things as simple as shaking hands—Is that going to completely go away?—and how we connect with people.”

Hawkins also was humbled to be named to Becker Hospital’s National List of African American Leaders to Know in Health Care because, he said, “I know of other African American leaders I would probably put on that list ahead of myself.”

“One thing I like about [being on the list], though, is I’ve noticed that a fair amount of young professionals, particularly those of color, are reaching out to me on LinkedIn, [which] affords me the opportunity to give them some insight on how they can better navigate their own careers.”

Hawkins embraces the opportunity to pay it forward.

“I’m going to be very intentional and make myself very available to any young professional, particularly those of color simply because there just aren’t many of us,” he said.

Hawkins, 46, was born and raised in Munford, Alabama. He graduated from Morehouse College in Atlanta, Georgia, with a degree in biology in 1996 and came to Birmingham for postgraduate education, completing a dual master’s degree in business and science and public health at the University of Alabama at Birmingham (UAB) in 2007.

“Early in my career, I was familiar with the reputation of [Princeton’s] services, as well as its mission and location,” he said. “Being an hour away from Munford, where I grew up, was very appealing. I have younger children and wanted them to be closer to my parents, who still live there. [I also] have some family in Birmingham.”

As COO, Hawkins is responsible for productivity, operational performance, and staff retention—and the COVID-19 pandemic has changed his life personally and professionally, just as it’s done for many people.

“I admire the ingenuity [of] health care professionals around the world and some of our employees right here at Princeton [when it comes to] things they do to protect themselves, as well as visitors and patients,” he said.

The pandemic reminds Hawkins of why health care professionals do what they do “from more of a caregiving … and compassionate perspective,” he said, adding that it has also shown him the importance of family time.

Hawkins has been married for 15 years and has two children, a 4-year-old son and a 9-year-old daughter.

“I try to think of ways to entertain our children and assist with their education,” he said. “I appreciate things more … and doing more simple things like family game night that, in all honesty, we probably should have been doing more of anyway. [That’s] something we’ll continue to do because we’re having fun.”

Another way Hawkins ensures that his family is having fun is by riding bikes with his daughter and going on scooter rides with his son. One day while he and his daughter were riding their bikes in Vestavia Hills, they noticed that their neighbors were not only counting their laps but also cheering them on, which gave his daughter the courage to keep riding. Fun family activities also help Hawkins decompress from workday stress.

“When I’m doing those things, very rarely does the hospital business or even COVID-19 itself enter my thinking,” he said. “I realize, ‘I can’t think about that right now.’”