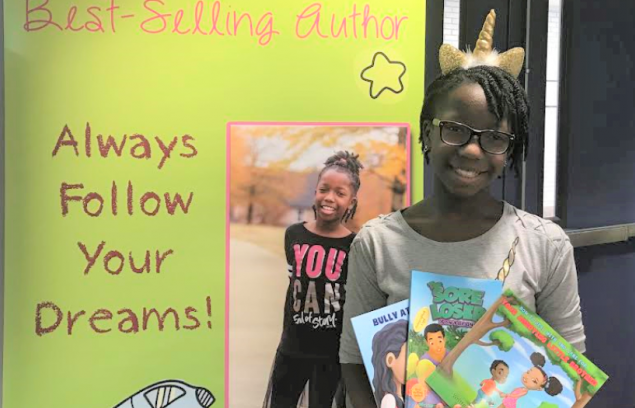 When Nia Mya Reese was given a first-grade class assignment to write about a topic for which she was considered an expert, she knew the subject for her: “Dealing with and caring for my annoying little brother.”

That was four years ago at Deer Valley Elementary School in Hoover. Now, Nia Mya, 11, is a fifth grader at Brocks Gap Intermediate School in Hoover—and that one assignment set her on the road to become the published author of three books with the help of her mother, Cherinita Ladd-Reese.

During the summer of 2016, Cherinita found the writing assignment among Nia Mya’s classwork and thought it was funny.

Nia Mya recalled, “[My mother] asked me if I wanted to work on cleaning it up and turning it into a book as a summer project. She said that since I liked going to the library so much, I could possibly one day have my own book on a shelf, and that seemed pretty cool.”

Cherinita said she didn’t know the first thing about publishing when she decided to turn Nia Mya’s class assignment into a book project, but she saw it as a way to give her daughter a productive summer and to “start developing what I saw to be a gift to see things from a unique perspective.”

“I wanted [Nia Mya] to see what it was like to have a finished goal and possibly get [her book] in the library, so I searched around for publishing companies that could walk me through the process,” Cherinita said. “I reached out to Yorkshire Publishing, and when they saw the manuscript, they wanted to partner with us on the project. I didn’t know it was about to change the trajectory of our lives.”

Nia Mya has three published books—“How to Deal with and Care for Your Annoying Little Brother,” “Bully at School: A Bully’s Perspective,” and “The Sore Loser (Don’t Be One!)” The first two books are published by Yorkshire Publishing, and the third is her first self-published book.

All of Nia Mya’s books are professionally illustrated.

“Each book has a different illustrator, but the publishers have a team of illustrators that can take the concepts we submit and design from there,” Cherinita said. “[Nia Mya’s] first book had concepts designed by her cousin. For the other books, Nia Mya submitted ideas concerning what she wanted, and [the publishing house] took it from there.”

Since schools closed in March because of the COVID-19 pandemic, Nia Mya has been journaling, spending extra time with her family, and writing to seniors at the Galleria Woods Senior Living facility, a continuing care retirement community in Hoover.

Cherinita said Nia Mya and her younger brother, Ronald Michael, have been somewhat isolated and haven’t been able to see their grandparents, so they have been writing to them and doing a lot of video calls.

Despite the uncertain times, Nia Mya is doing well.

“Emotionally she’s been OK, but it is different,” Cherinita said. “She misses her friends.”

Nia Mya’s biggest supporters include her brother, who is now 8 but was a toddler when he inspired her first book; her father, Ronald Reese; and her mom: “My momager,” Nia Mya said.

The young writer said her childhood career has had an impact on her life.

“I have more places to go, like during meet-the-author visits, but nothing changes, except for when my friends introduce me to someone and call me ‘the author,’” Nia Mya said.

Before schools closed, Nia Mya, who has served as an ambassador for national girl’s accessories and clothing boutique chain Justice Girls since 2017, would visit elementary schools with her books.

“I think I inspire [other young people] to try harder in school because they don’t know where it can take them,” Nia Mya said. “When they see me, they see that they aren’t too young to do great things.”

Cherinita said Nia Mya’s appearances have resonated with children, and teachers have emailed following some of her visits.

Cherinita, 47, keeps Nia Mya’s life grounded and normal by being protective of her family’s schedule and what’s best for them.

“She is a kid every day. I try to keep her life pretty normal,” Cherinita said. “I manage her social media accounts and … let her know if there is an author engagement coming up—[not too far in advance, though], so it’s not on her mind.”

“I didn’t want her pulled in a direction that I know she wouldn’t like or that would not be conducive to our family work-life balance. I schedule only one to two, max, author visits a month. [Nia Mya] is a great student. She makes straight A’s, and she’s a Duke TIP Scholar,” which means she belongs to a Duke University Talent Identification Program that identifies academically talented children in grades four through seven.

Nia Mya said she wants to be an animator, astronomer, graphic designer, or scientist, when she gets older: “Whatever I do, I am going to eventually teach because I love information and teaching,” she said.

Like many other children her age, Nia Mya loves dancing, video games, drawing, reading, listening to music, “and just creating,” she said.

“I dance [at That’s the Pointe Dance Studios in Chelsea], and I volunteer helping preschoolers at my church, [Faith Chapel],” Nia Mya said.

“Being a volunteer to younger kids and a big sister has taught me a lot of different character traits like patience and forgiveness—it takes a lot of it to be any sibling,” she said, laughing.

Nia Mya Reese’s books can be purchased online at Amazon, Barnes and Noble, and Books a Million.