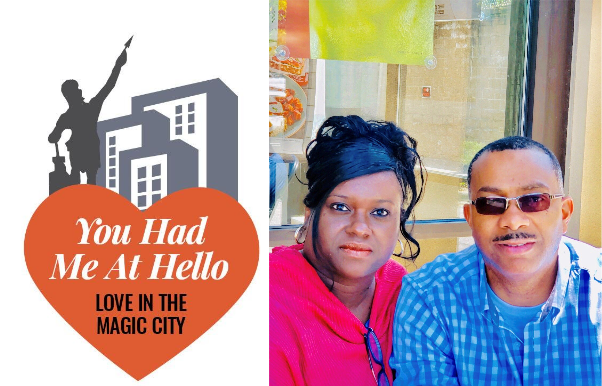 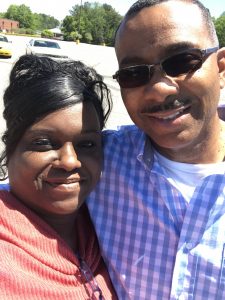 Met: Summer 1989, in Melissa’s apartment on Birmingham’s Southside. Rod came over for a house party hosted by one of his hometown friends from high school [in Anniston] who was a student at the University of Alabama at Birmingham (UAB) and Melissa’s roommate.

“They were at UAB and a lot of our [mutual] friends were into the party scene and I’d gone by her apartment a couple times for parties and to see my high school friend and cousins,” Rod said, “… One night I went by there and they were all gone, except for Melissa… I had a Toyota Celica back then and I asked her to go riding with me. That’s when it clicked for us that we had more in common, we weren’t all about the party scene…,” Rod said.

“Rod and I used to hang out all the time because we threw parties at my apartment. But after we went riding that night, we [became] inseparable,” Melissa recalled.

First date: Summer 1989, at McDonalds on the Southside.

“I wasn’t in school, I [joined the workforce] when I moved up to Birmingham after high school and had a pretty good paying job. I asked her if she wanted to go out to eat… I was trying to impress her and was trying to take her to all these [expensive] restaurants, and she said ‘I wasn’t born with a silver spoon in my mouth, we don’t have to go no place expensive’… then we ended up at McDonalds,” Rod said.

Melissa liked that Rod was a genuine guy and “what drew me to him was that he had a very good heart; he was someone who would always try to help people,” Melissa said. “I was quite nervous on our first date because after you’ve been friends with somebody for so long and then it turns into something else it’s kind of scary. But I was excited because I knew that I could have a relationship with him. I did have butterflies.”

The turn: A trip to visit Melissa’s family in Pensacola, FL in summer of 1992 showed Melissa that Rod was truly the one. “Rod had never been to Pensacola and I had never taken anyone to meet my family, and the way he interacted with my family solidified that I had made the right choice and that he was the right one,” Melissa said.

By January of 1993, Rod became just as sure of his future with Melissa as she was.  “I already had my oldest son [Roderick who was five years old at the time] that I was taking care of so I knew that would be a challenge for anyone, but she embraced my whole situation,” Rod said. “She was a down to earth person and had a good heart as well and welcomed my son and what I was trying to accomplish in my life.”

The proposal: January 1994. After they’d been together for five years, Rod had just purchased a home for himself, his son and Melissa in Center Point. They were watching a Chicago Bulls game in their den when he surprised his soon-to-be-wife.

“We were both big basketball fans and having a good time, laughing and joking,” Rod said, “so I decided that I would [propose] at halftime. Halftime came and Melissa was up standing in front of our floor model tv, and I asked her to turn around, and when she did I was down on one knee with the ring and asked her to marry me. She accepted.”

“I was very surprised,” Melissa said. “I did not know it was coming. I was very emotional, I accepted and that was the beginning of the rest of our lives.. I thought the ring was absolutely beautiful.”

The wedding: A justice of the peace met them at Kelly Ingram Park and performed their nuptials. “We decided against a big wedding,” Melissa said. “I had on a cream dress that my sister had made for me, and Rod was wearing a black suit.”

Most memorable for the bride was the ceremony. “It was very sweet and very personal,” Melissa said. “Just having my mom and my sister there and the person that I loved.”

Most memorable for the groom was the reception at their house. “That’s where the rest of the family was waiting for us. It was my mom’s birthday and I wanted to honor my mom on the day… Everybody came and had a good time, we were laughing, having fun, and happily married,” Rod said.

Words of wisdom: A big part of marriage is companionship, Rod said. “You marry for companionship and you learn to love each other more as time goes on, [which is why] you have to be open to communication. You have to let your spouse be themselves…Melissa is not my daughter, she’s my spouse, I can’t boss her around, so having great communication is important, it has worked for us.”

Melissa said, “when you marry somebody, you marry them because you love, care and respect them. As you go on through life, remember to respect that person, their beliefs, and their opinions. Let their beliefs be heard and don’t try to change that person. Love them for who they are.”

Melissa, 50, is a Pensacola, Florida native and Woodham High School [FL], grad. She attended the University of Alabama at Birmingham [UAB] where she earned a bachelor’s of science degree in criminal justice. She is a manager at Protective Life Insurance Co. in Birmingham.

Rod, 54, is an Anniston native and Anniston High School grad. He attended Bessemer Tech where he earned a certification in Machine Tool Technology, and works for Stark Exterminators in Homewood.

Melissa currently works from home during the pandemic, but Rod is still in the field and said his company won’t enter a home unless it’s dire.