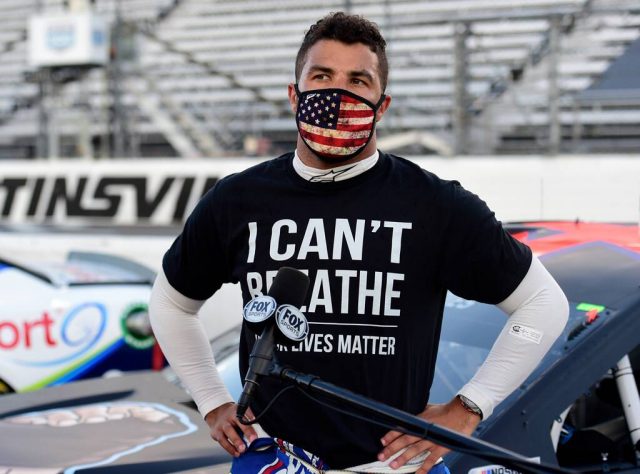 NASCAR President Steve Phelps said Monday afternoon that the sport will permanently ban the person or people who hung the noose in Bubba Wallace’s garage stall at Talladega (Ala.) Superspeedway Sunday.

“Unequivocally, they will be banned from the sport for life,” Phelps said in a teleconference with reporters. “There is no room for this at all. We won’t tolerate it. They won’t be here.”

Phelps underscored NASCAR’s conviction that “there is no place for racism” in the sport and said that the “heinous act” only strengthened its resolve to make stock-car racing welcome and open to all, then fielded questions.

Noting that the FBI is on the scene and investigating, Phelps declined to disclose how many surveillance cameras, if any, are in the Talladega garage and what, if any, footage they might have captured. Similarly, he declined to reveal the number of people who had access to the infield garage in general or the area of Wallace’s No. 43 stall, saying such details were part of the FBI’s investigative process.

The noose was discovered Sunday afternoon by a member of the No. 43 race team, who reported it to NASCAR.

Phelps said that 7:30 a.m. Monday, NASCAR notified the FBI and that its investigators were on site.

“We don’t have a lot of answers at this moment,” said Phelps. “It is a very, very serious act, and we take it as such.”

Wallace, the only full-time African American driver in the stock-car circuit’s elite Cup Series, called it a “despicable act of racism and hatred [that] leaves me incredibly saddened and serves as a painful reminder of how much further we have to go as a society.”

NASCAR said in a statement that the noose was discovered in the late afternoon, on a day when its Cup Series race in Alabama was the first to have any fans in attendance since the organization banned all displays of the Confederate flag after Wallace pushed for such a move. Thunderstorms forced postponement of the race until 3 p.m. Eastern time Monday, with the noose incident now overshadowing the race.

Some of the biggest names within racing and in other sports were stunned by the incident. It left Dale Earnhardt Jr. with one wish.

And Richard Petty, the NASCAR legend who runs the company for which Wallace drives, will be in Talladega on Monday to show support for Wallace. Petty has attended no races during the novel coronavirus pandemic.

“We are angry and outraged and cannot state strongly enough how seriously we take this heinous act,” NASCAR said. “We have launched an immediate investigation and will do everything we can to identify the person(s) responsible and eliminate them from the sport. As we have stated unequivocally, there is no place for racism in NASCAR and this act only strengthens our resolve to make the sport open and welcoming to all.”

Jay E. Town, U.S. attorney for the Northern District of Alabama, said in a statement Monday that his office, the FBI and the Department of Justice Civil Rights Division “are reviewing the situation surrounding the noose that was found in Bubba Wallace’s garage to determine whether there are violations of federal law. Regardless of whether federal charges can be brought, this type of action has no place in our society.”

In a statement on social media, Wallace declared the act shows “how persistent we must be in the fight against racism.”

“Over the last several weeks, I have been overwhelmed by the support from people across the NASCAR industry including other drivers and team members in the garage,” he added. “Together, our sport has made a commitment to driving real change and championing a community that is accepting and welcoming of everyone.

“Nothing is more important and we will not be deterred by the reprehensible actions of those who seek to spread hate. As my mother told me today, ‘They are just trying to scare you.’

“This will not break me, I will not give in nor will I back down,” continued Wallace, 26. “I will continue to stand proudly for what I believe in.”

ESPN reported that Wallace never saw the noose and that it was immediately reported to NASCAR officials after it was discovered by a member of Wallace’s team. The Post’s Liz Clarke, who has extensively covered NASCAR, noted how closely the organization restricts access even when there isn’t a pandemic. It “controls entry into its garages,” she wrote. “Not just anyone can get into a garage stall, particular given tightly controlled access amid pandemic.” The speedway had not commented on the incident as of Monday morning, and it is not clear whether there are security cameras in the area.

Only 5,000 fans were admitted Sunday to Talladega Superspeedway as NASCAR took another step toward returning to action in the wake of the pandemic. After shutting down in March, as did almost all major sports leagues worldwide, NASCAR began to stage races again in May, shortly before footage emerged of George Floyd’s death.

That event sparked widespread demonstrations against racial injustice and police brutality, and Wallace drove a car emblazoned with the hashtag #BlackLivesMatter in a race this month.

“My next step would be to get rid of all Confederate flags,” Wallace said at the time. “There should be no individual that is uncomfortable showing up to our events to have a good time with their family that feels some type of way about something they have seen, an object they have seen flying. No one should feel uncomfortable when they come to a NASCAR race. So it starts with Confederate flags. Get them out of here. They have no place for them.”

NASCAR responded quickly by broadening its ban on displays of the Confederate flag, which already extended to its teams and company personnel, to fans at its events and properties.

“The presence of the Confederate flag at NASCAR events runs contrary to our commitment to providing a welcoming and inclusive environment for all fans, our competitors and our industry,” NASCAR said June 10 in a statement. “Bringing people together around a love for racing and the community that it creates is what makes our fans and sport special.”

Before Sunday’s race, an airplane flew over Talladega pulling a large Confederate flag and a banner that read, “Defund NASCAR.” There also was a rolling protest just outside the grounds of the raceway, with vehicles parading Confederate flags.

Wallace has said that in the wake of his call for NASCAR to ban the flag, he has received messages of support, including from some people who say they are following the sport for the first time. However, he has also been the subject of considerable anger and even threats, he told The Washington Post recently.

“They see me as somebody who’s tearing down their heritage,” Wallace said of those angry about the ban. “But we’re not trying to close the door on you; we’re opening the door to many others that want to be a part of this sport.”

While sharing NASCAR’s statement about the discovery of the noose, Cup Series driver Michael McDowell tweeted Sunday: “God help us. The level of evil it takes to do something like this is disgusting. This is enraging and heartbreaking all at the same time.”

Jimmie Johnson tweeted that he couldn’t “begin to fathom the pain this action has caused. I stand with you, @BubbaWallace.”

Driver William Byron called the news of the noose “horrible,” adding: “Cannot believe something like this could happen and the hate that one must have to do this. I’m praying that we are better from this #IStandWithBubba.”

Michael Waltrip echoed that hashtag and Earnhardt’s hope. “God created us equal. I will never understand how some people don’t believe that. The stupid hatefulness that happened yesterday is disgusting. I know @NASCAR will oust this idiot. Go win today @BubbaWallace. I’ll be cheering you on. #IStandWithBubba.”

Ryan Blaney tweeted that Wallace is “my brother and always will be. Don’t let the people who are lower than life to try to bring you down. They won’t scare you because you’re strong. I stand with you pal. Forever.”

LeBron James took to Twitter to call the act “sickening,” telling Wallace: “Know you don’t stand alone! I’m right here with you as well as every other athlete. I just want to continue to say how proud I am of you for continuing to take a stand for change here in America and sports!”
AD

Alabama Gov. Kay Ivey condemned the incident, saying in a statement Monday that she “was shocked and appalled to hear of yesterday’s vile act” and apologizing to Wallace.

“Bubba Wallace is one of us; He is a native of Mobile and on behalf of all Alabamians, I apologize to Bubba Wallace as well as to his family and friends for the hurt this has caused and regret the mark this leaves on our state.”

Earnhardt admitted that he was concerned about Wallace felt accepted and welcome in NASCAR.

“I don’t worry about our sport,” he tweeted. “I have confidence NASCAR’s leadership will find who did this and continue pushing us in the right direction. I do worry about Bubba. I hope Bubba is feeling loved and supported. Keep sending him that love and support. He needs it now more than ever.”