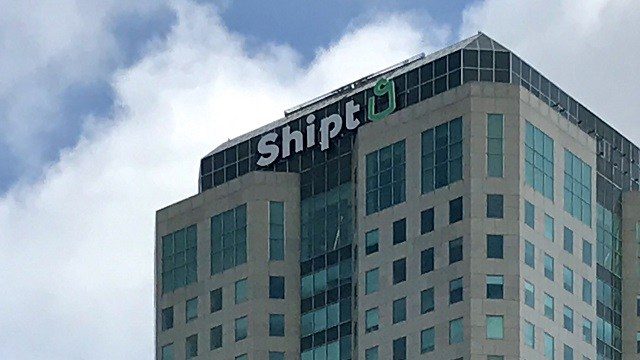 The whirring of helicopter blades and streets blocked by police barricades interrupted a quiet Saturday in downtown Birmingham as one of the city’s most prominent corporate residents put its new mark on the city’s tallest building.

Shipt, the online grocery-delivery service founded in Birmingham in 2014 that has since grown into a nationwide force, needed the helicopter to carefully place its shiny green logo on top of the old SouthTrust Tower. The skyscraper, on Birmingham’s north side, was most recently called the Wells Fargo Tower – before Shipt began leasing space in the building last year.

Shipt adopted a new logo early this year, switching from a throwback flying saucer to a look that includes the company name in bold letters plus a stylized “S” that resembles a shopping bag – a nod to the bright green bags used by Shipt shoppers.

“Shipt is excited to bring our new logo to one of the tallest buildings in Alabama, the Shipt Tower, and to show our continued commitment to the city of Birmingham.” a company spokesperson told Alabama NewsCenter.

“Earlier this year, Shipt made the investment to show who we are, what we do and the quality in how we do it,” the spokesperson said. “Our new logo is bold and distinctive, yet human and approachable, and will allow us to stand out in markets while still resonating with our target audiences.”

According to the online site Bhamwiki.com, the building was the tallest in the state and the tallest between Atlanta and Dallas until construction of the 35-story, RSA Battle House Tower in Mobile in 2006.

Downtown Birmingham residents and visitors to Railroad Park on Saturday morning stopped to watch as a helicopter delicately attached the new Shipt logo to the building. The Wells Fargo logo was removed from the tower in late 2019.

Shipt’s rise drew national headlines in late 2017, when the company was acquired by Target for $550 million. The swiftly expanding company grew even more, according to the company’s website, expanding “coast to coast” and to Hawaii – tripling its footprint. Since early 2019 the company has added dozens of new retailers, and surpassed 100,000 shoppers, who pick up and deliver items to Shipt clients. During the pandemic, the company has seen more growth while hiring even more shoppers, according to recent media reports. The company remains headquartered in Birmingham, with an office in San Francisco.