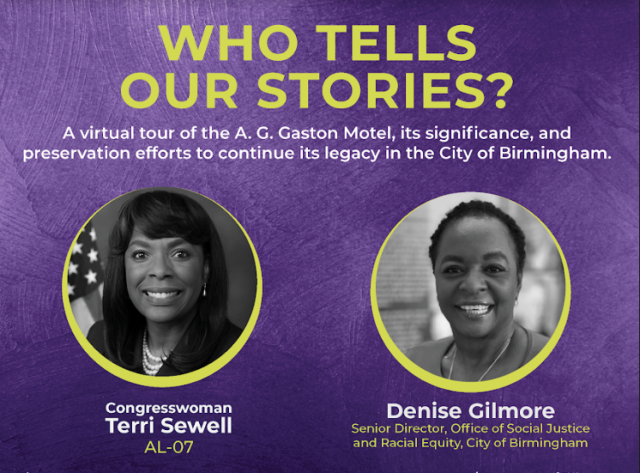 Topics such as Southern politics, immigration, female leadership, LGBTQ issues and Black activism in technology will be featured.

Terri Sewell, who represents Alabama’s 7th Congressional District in the U.S. House of Representatives and Denise Gilmore, senior director of the Office of Social Justice and Racial Equity for the City of Birmingham, will host a discussion the preservation and promotion of local treasures like the A.G. Gaston Motel.

The two are featured on a panel: “Who Tells Our Stories: A virtual tour of the A. G. Gaston Motel, its significance and preservation efforts to continue its legacy in the City of Birmingham.”

In January 2017, President Barack Obama designated the Birmingham Civil rights District as a national monument. Since that time, the National Park Service has maintained a partnership with the City of Birmingham to restore the A.G. Gaston Motel to its appearance during the Birmingham civil rights campaign of spring 1963.

The City of Birmingham is the presenting sponsor of the Freedom Fest, which includes music performances, as well, featuring acts such as Rapsody, Translee, Pastor Mike Jr., Sherri Brown and Shaheed & DJ Supreme.