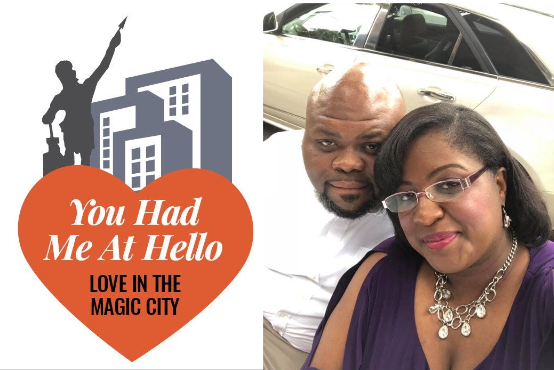 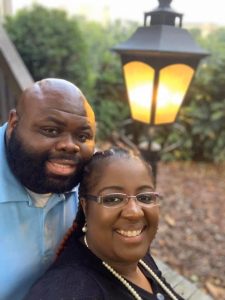 Met: Fall 2006, La Costa was visiting Hopewell Baptist Church in Birmingham, which Jerry attended, to rehearse for an annual gospel concert and Jerry sat in on the rehearsal.

Jerry said he noticed La Costa had participated in his church’s concert two years in a row and remembered who she was when she in-boxed him on Facebook.

“In 2008, she saw me on Facebook, and that it was my birthday and invited me out,” Jerry remembered.

“[Jerry’s] best friend was one of my friends on Facebook and I saw that he had tagged Jerry in a birthday post. I clicked on his picture to message him, tell him happy birthday …we weren’t even Facebook friends yet,” La Costa said.

First date: January 2009 at the Cheesecake Factory at the Summit.

La Costa remembers spending “five and half hours, conversing and getting to know each other. We had church in common, we are two church going people so we were talking about church a lot… He was cute, he was someone that I could sit and talk to and be myself with,” she said. “And, we shared a piece of red velvet cheesecake.”

Jerry said he didn’t want the date to end, “that’s why we ended up staying so long. And, it stood out that she picked up the bill. A lot of women have invited me out in the past, and I still had to pay, so that was something,” said Jerry.

“Yes, I stuck to my word,” La Costa said, “I invited him out and I wanted him to have a good time, so even though his birthday [was a few months ago], I still paid.”

Although it was the beginning of their courtship, Jerry said that his grandmother’s warm interaction with La Costa was a nod in the right direction.

“I had asked the Lord for a sign, and confirmation [that La Costa was the one], and He gave it to me. My grandmother kept saying that [La Costa] was going to be her granddaughter and I told her we were just friends, and she said that’s fine,

she’s still going to be my granddaughter.” said Jerry.

The proposal: July 2, 2009, at Jerry’s house in Bessemer. Despite initial intentions to propose while away on a birthday trip in Philadelphia, Mississippi, Jerry could not propose as planned because he had left the ring at home in Bessemer. However, the couple came back home to attend a wedding, and afterwards “I asked her to fix me something to drink, and when she went to the kitchen, I lit a candle, put on some soft music and got down on one knee,” Jerry said. “When she came back in the bedroom, I was on one knee, and she asked me what I was doing, and I pulled the ring from behind my back and said, “I’m asking you to marry me. Then she cried like a baby and said yes.”

La Costa said she was trying to figure out what was taking place.

“Because of how he had everything set up in Mississippi, I knew it was coming but I didn’t know when. When I saw him on one knee, I asked what he was doing because I was shocked and happy,” La Costa said.  “It was good emotions all over, and in between tears and laughs, I said yes.”

The wedding: At New Bethlehem Baptist Church in Bessemer. It was officiated by Rev. Dr. William H. Walker Sr. Their colors were rose pink, chocolate and off white.

Most memorable for the bride was realizing she had left her husband’s wedding band in her dressing room while taking their nuptials.

“When my pastor was leading up to [the ring exchange] Jerry and I were looking at each other eye to eye, and I froze because I realized I left his ring in my dressing room…. being the outspoken person I am, I asked my mom out loud in front of everybody to go in my dressing room and get it for me,” La Costa laughed. “And we went on with the ceremony, but when my mom came back with it I held it up high and said ‘ha ha, I got it now’, and then I was able to officially place the wedding band on his finger.”

Most memorable for the groom was a sudden case of cold feet. “I was at the hotel by myself and for once in my life I was scared. I had like 40 missed calls, everybody was waiting on me [to arrive at the church]” said Jerry. “I was sitting there thinking I couldn’t go through with this, but then I started praying and went on and got in the shower, and after that I went on and went to the church… when I got there, I had a grand crowd waiting for me outside. La Costa had stopped everything and everybody from getting ready until I showed up. She wasn’t very happy, but she understood and we went on with the wedding.”

The couple honeymooned in Detroit, Michigan.

“We went up there for Jerry’s cousin’s wedding and spent some time alone celebrating ourselves,” said La Costa, “We went to Coney Island [a restaurant chain] and had the best hot dogs…”

Words of wisdom:  Not to ever stop dating, La Costa said.

“We will spend time grocery shopping and that will be a date for us, it’s about spending time together. And, make sure you have a role model couple that you can go to and talk to that has been in this game [married] for a very long time. And I’m talking 50-plus years, because those are key people who can tell you how to handle the challenging times. And in the words of my pastor [Rev. Dr. William H. Walker Sr.] ‘if you can’t get her nothing but a candy bar, get her something to show you still love her.’ That’s about being thoughtful of each other and showing you still care,” La Costa said.

Jerry said to not change your spouse. “Let them be who they are because you’re going to have a problem trying to change someone else. Work on yourself and let God do the rest.”

Happily ever after: The Gaston’s have one child, KenDarius Hicks, 19.

La Costa, 39, is a Bessemer native, a Jess Lanier High School grad, who attended Virginia College [Birmingham] where she earned an associate’s degree in paralegal studies. She works as an Office Manager for Alabama Wellness and Recovery Services in Birmingham.

Jerry, 36, is an Ensley native and Ensley Magnet High School grad, who works as a Life Insurance Broker in Birmingham.

During the COVID-19 pandemic, the Gaston’s are both still working from home and in the office.