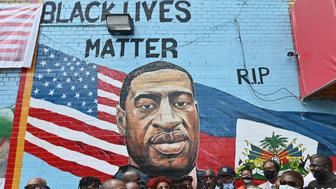 Nearly two months after George Floyd died after a Minneapolis police officer kneeled on his neck, lawmakers in Minnesota have passed a police accountability bill that would ban such physical restraints and increase use of force reporting.

The Minnesota Police Accountability Act, which was passed around 2 a.m. Tuesday, includes a statewide ban on chokeholds and neck restraints, aggressive “warrior-style” police training, and requires officers to intervene when a fellow officer uses unreasonable force.

The bill also creates a community advisory council for the state’s police licensing board, and an independent use of force investigative unit. The bill now goes to Democratic Gov. Tim Waltz’s desk. He is expected to sign it.

“Today, we’re beginning to make the overdue changes Minnesotans have been demanding to help ensure no more lives are lost due to police violence,” he said in a statement that referenced Floyd’s May 25 death, and the 2016 police killing of Philando Castile.

“It wasn’t safe for George Floyd or for Philando Castile, and they deserved a better way to police that builds community,” Mariani said.

The bill’s passage followed weeks of negotiations within the state’s divided legislature over key details, as other cities, states and countries passed their own ordinances banning chokeholds and other aggressive police maneuvers.

One such point of contention within the bill was the “warrior” training — described in the bill as training that encourages aggressive conduct and “increases a peace officer’s likelihood or willingness to use deadly force” — which Republicans had initially refused to consider changing.

This training had been formally banned by the Minneapolis Police Department, only for it to be offered by the city’s police union.

Minneapolis, like many other parts of the country, has faced ongoing unrest in the months following Floyd’s death.

In addition to sometimes violently intervening in protests, the city’s police department has faced internal turmoil, with reports of officers leaving the force in large numbers.

“It’s almost like a nuclear bomb hit the city, and the people who didn’t perish are standing around,” Rich Walker Sr., a 16-year Minneapolis police veteran and union official, recently told The New York Times of the atmosphere within his department. “I’m still surprised that we’ve got cops showing up to work, to be honest.”

Nearly 200 officers have applied to leave the department of roughly 850 officers due to what they’re describing as post-traumatic stress, a lawyer representing the officers told the Times.