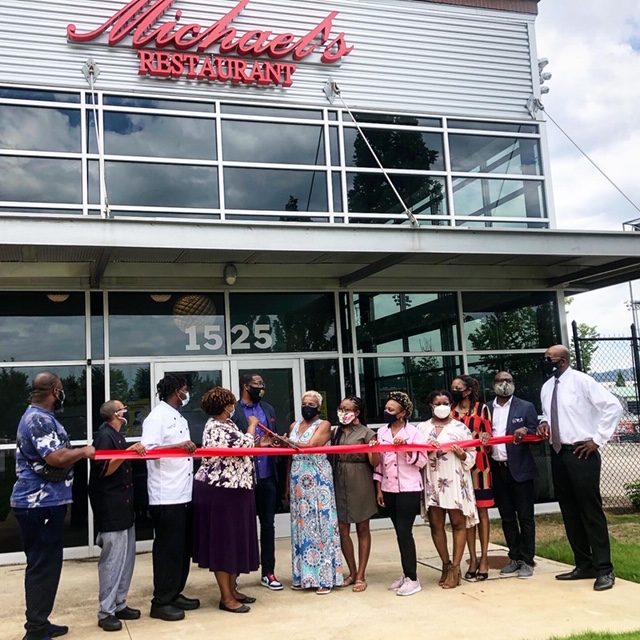 Bernadine Birdsong remembers her 1977 junior prom night like it was yesterday.

She wore blue. Her prom date was the nephew of Temptations singer Eddie Kendricks.  And her dinner was the steer butt steak at the legendary Michael’s Restaurant in Birmingham.

“I had never had steer butt, so I tried it. It was the feature of the night,’’ she said. “I tasted it, and it was amazing.’’

Her affection for the restaurant, founded in 1953, grew over the years, even when other owners moved it from Birmingham to different locations, including Hoover and Homewood. In 2016, Birdsong bought the restaurant while it was in Homewood. And when she later heard there was an opportunity to have a restaurant at the back of the Negro Southern League Museum, she thought Michael’s would be a good fit.

On Monday Aug. 3, she marked the move with a ribbon cutting to open the restaurant.

“It just never felt exactly right in Homewood or Hoover. But with it being back in Birmingham, this feels like the perfect place to be,’’ said Birdsong. “It feels right to be here.’’

She said steer butt will be on the menu as well as the restaurant’s award-winning bread pudding and award-winning chicken wings. (She said the wings are award-winning because of the special marinade and that they are wood fire grilled.)

“When people come, they can expect the same great food, the same great service and amazing views,’’ she said of the venue, which is on First Avenue South, across from Railroad Park and sandwiched between B&A Warehouse and the Regions Baseball Field. “It will be the old Michael’s in a new location.’’

She runs the business with investors: her mother; Amelia Williams; and her son, singer/songwriter Sebastian Kole. Other relatives such as her daughters and brothers are also involved in the restaurant. For them, it’s definitely a family affair.

“This has been a family venture that we took on together, and I’m excited to see it come to life,’’ said Kole. “Food is all about family and sharing experiences. And that’s what music is about, too. This Sunday, I will do a pop-up performance for brunch.’’

The brunch will be held on the rooftop of the two-story facility, which features artwork and interior decorating from Alabama artists.

“I wanted this to feel like an art gallery, and I think that’s what we captured,’’ Birdsong said. “When you are going up the stairwell, you will see the Gee’s Bend quilts.’’

“I’m excited about this opportunity for Ms. Birdsong and her family,’’ Woodfin said. “For Michael’s to have a home at the Negro Southern League Museum, where Birmingham’s African-American baseball history has deep roots, is important. Her family has planted a seed in Birmingham, and I celebrate them as they grow their business into a tradition that will impact people as well as our city.’’