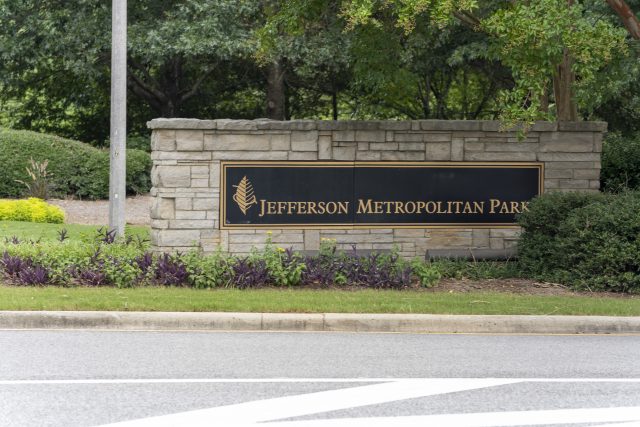 Little catches the eye during the drive west on Lakeshore Parkway from the Wildwood Shopping Center that straddles Homewood and Birmingham. The smooth thoroughfare is largely flat as it curves into the Oxmoor Valley.

The north side of the divided road is lined with trees after you pass Red Mountain Park, and there is a neat apartment complex on the left before the Dollar General distribution center.

The untrained eye might miss the sign for the Jefferson Metropolitan (JeffMet) Park on the south side of Lakeshore. But for some of the most iconic brands in the world, this industrial park—and its companion site in McCalla—are must-see destinations for a spot to locate aspects of their businesses.

One is along Lakeshore Parkway just east of Bessemer in Birmingham, and the other is in the McCalla area, an unincorporated swath of land in Jefferson County about a quarter mile from the Tuscaloosa County line.

FedEx, Mercedes, Publix, Home Depot, Amazon, Wells Fargo—all of these giants have businesses or suppliers in or near the two industrial parks and have had a “significant economic impact” on the region, said Ted vonCannon, executive director of JCEIDA since 2012.

According to its website, the JCEIDA was formed in 1995 with the mission of providing an inventory of commercial sites for new and expanding businesses. Currently, more than 20 companies are operating in JCEIDA parks and lands, employing approximately 3,000 workers. Auburn University at Montgomery released a study in 2012 that shows the total output for both parks was estimated at $760 million annually.

“I believe those numbers have increased 10 to 15 percent since 2012,” vonCannon said.

The industrial parks are job creators like few in the Southeast—and there are no signs of slowing, the JCEIDA executive director said. Just this month, Mobis, an auto supplier, announced plans to bring more than 120 jobs to the JeffMet McCalla location. It will manufacturer the front and rear axle for electric vehicles made at the Mercedes plant, and jobs at the Mobis venue will have an average wage of $23 an hour.

“Once you have one supplier come in, there’s the potential of having [another] supplier in close proximity. As Mercedes starts [its] expansion, McCalla becomes an integral part of providing supplies and workforce to the Mercedes plant. Especially since they’re moving to electric vehicles, newer and different suppliers will be required,” he said.

JeffMet Lakeshore is a part of a growing logistics and distribution corridor that now will include FedEx’s recently announced $40.6 million, 300,000-square-foot facility, which will stand on a 46-acre site off Lakeshore Parkway. The new building will be next to the Dollar General distribution center.

Ammons said the JeffMet parks are key ingredients in that distribution corridor.

“[They give] us available land, which is a primary thing we haven’t had in Jefferson County in a while—land that was for sales specifically for economic development purposes,” he said. “In the past, it’s always been [that] you have to go work with that landowner or this landowner. Those parks were put together specifically for that purpose, where we had available land around available workforce that could give us a competitive advantage.”

In central Alabama, property can either be very hilly or wetlands that are difficult or impossible to develop. The JeffMet parks address those topographical challenges.

“Having that mass land certainly gives us a competitive advantage over others,” Ammons said. “I don’t know that there’s any other place that has relatively flat land—we call it ‘Birmingham flat’—available in that large acreage.

“We understand that Birmingham is definitely at the southern end of the Appalachian Mountains,” the commissioner continued, speaking of the region’s hilly terrain. “This comparative to the rest of Birmingham is relatively flat.”

“I wouldn’t hesitate to say that those two parks, at the time of their development, were probably the two premier industrial parks in the state,” he said. “When Jefferson County did those two parks, … they made sure not only that a good amount of adequate land was available but also that the infrastructure was in place.”

The JeffMet parks were done so well that they have become a model for others, Traywick said.

“They really are sort of a best-practices example on how to do an industrial park in a manner that not only attracts good quality companies, but … they’re darn good-looking parks, [too],” the BBA vice president said. “All the utilities are underground. Landscaping is top notch. They’re not a buried treasure at all. Companies are coming in looking to potentially build something new here.”

“Doing it right” also included grading and clearing of property and the establishment of protective covenants to ensure that high-quality businesses located there. Traywick recalled OfficeMax being the first business to establish a distribution center at the McCalla park. Two decades later, Publix has replaced OfficeMax, and it has been joined by Home Depot and the growing number of automotive suppliers. Other major companies such as Amazon and Carvana are also along the corridor and coordinate nicely with the JeffMet parks, vonCannon said—“Anything that will help this county grow.”

“We can be a potential supplier, or they can utilize support and help from any [businesses] in this park,” he said. “All of these things work together. It’s all supportive.”