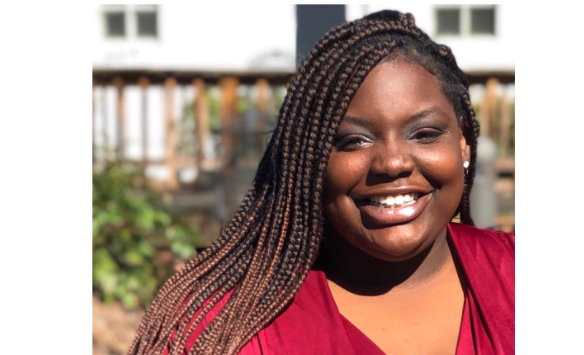 Asked to gather signatures to help form a junior board with the Cahaba River Society (CRS), whose mission is to protect the Cahaba River watershed, Teah Thompson wasted no time. Told 25 names were needed, Thompson, a junior at the University of Montevallo (UM) majoring in environmental studies, went right to work.

That was during the spring 2019 Earth Fest on the UM campus, where Thompson met La’Tanya Scott, an environmental educator with the CRS.

Getting the names and helping to form the CRS Junior Board, on which Thompson is currently co-chair, was a natural for the 21-year-old, who is also a co-president of the UM Environmental Club, popularly known as E Club.

“I feel like the importance of environmental justice is that people have to treat it like it’s a thing,” she said. “A lot of people, when it comes to things like environmental policies or climate change, are like, ‘Oh, this is just a crazy year and these things are happening.’ But, really, the Earth has been trying to tell us this was going to happen for a minute.”

Once on the CRS Junior Board, Thompson jumped into the CRS’s mission just as quickly as she got the names.

“Our biggest push right now is getting minorities involved in nature,” she said. “A lot of Black kids, don’t have access to swimming lessons, so they don’t go out on the river because they either can’t swim or have never been interested in or intrigued about knowing what they can do on the river.

The avid environmentalist is also on the CRS’s committee for the Annual Cahaba River Fry-Down, a festival during which people can witness cooks from across Alabama compete to see who can cook the best fish-based dish. Though “fry” is in the name, cooks aren’t limited to frying, and they can enter side dishes in the competition, as well. The event is usually held in a public place, such as Birmingham’s Railroad Park, but this year’s is being held virtually due to the COVID-19 pandemic.

The 2020 Cahaba River Fry-Down is interactive, free of charge, and available for viewing at https://frydown.swell.gives/, starting September 29 at noon through October 4. Cooks will upload videos of their dishes being prepared, which viewers can follow. The recipes will also be made available in a Fry-Down cookbook, so viewers can make the dishes at home. Anyone can participate in the online event, where they can enjoy the videos and recipes, as well as donate in support of their favorite contestant.

Thompson is going all out in this year’s competition as part of a father-daughter tag-team duo with her dad, Dwayne Thompson, who has his own barbeque sauce company, Big Daddy Sauces LLC.

Cooking skills run deep in the family and are taken very seriously, Teah said: “My grandma, [Lois Thompson], cooks really well. She had her own restaurant for a little while some years ago that did pretty well.”

Teah learned how to cook from her grandmother and her parents, Dwayne and Tremeshia Thompson.

“I feel like all the times I’ve been closest to my family or, you know, we’ve all kind of been together, it’s been kind of like, not necessarily centered around food; rather, food is usually a staple of bringing people together for us,” she said.

Thompson, who currently lives in Alabaster, Alabama, is originally from New Orleans, Louisiana. She was six years old when her family left New Orleans in the wake of Hurricane Katrina in 2005, which left more than 1,800 people dead and caused about $125 billion in damage.

“Honestly, as a kid, I didn’t really, get the full measure or scope of what was going on, but I kind of grew up quick after it,” she said. “While we were leaving, it was a little weird because we didn’t just go straight from New Orleans to Alabama. We hopped around a few places. I think we lived in Texas for a little while. I want to say another part of Louisiana, maybe Mississippi, a little while, and then when we moved to Alabama. We first lived in Inverness, and now we live in Alabaster.”

At first, having to leaving her hometown to settle down in Alabama was a challenge for Thompson.

“I cried on my first day of school here because someone opened their mouth and their accent was ridiculous to me,” she remembered with a laugh. “So, I cried. I mean, it wasn’t very scarring or traumatic, I would say. I think it caused a lot of us who were kids at the time to grow up really quickly. You know, when you’re a kid you want to have all the fun in the world, playing on playgrounds and stuff like that. But when I was six years old, [my family was] finding new houses, unpacking boxes, … you know, having to be more responsible.”

Ultimately, the move worked out for the best for Teah, her parents, and her older sister, Taizha.

“I think my family always kept in our mindset that we were more grateful for the move than anything because, ever since we’ve been here, there have been constant blessings for our family,” she said. “It’s just kind of changed our lives for the better. … I think it was a learning experience. There were a lot of jarring times and trials, but, other than that, I think there have been mostly blessings for our family.”

Even though Thompson and her family have no regrets about leaving New Orleans, she can’t help but notice the impact of climate change across the globe.

“When I got into environmental studies, I [thought] more critically about the government’s response to Katrina,” she said. “These are all domino effects, you know, and it kind of shaped a different way of thinking about the entire situation for me.”

“In Love with Nature”

Thompson didn’t start out as an environmental studies student. When she started at UM in the fall of 2017, her major was speech pathology, a field that generally requires one to possess a keen ear—something Thomson realized would be a problem in 2018, when “I found out I was losing my hearing, so that kind of went out the window for me,” she said.

The following year, she went with the E Club to an event called the Alabama Water Rally, an annual conference, educational, and celebratory event focused on the protection of waterways.

“I went and realized that I was actually really in love with nature, not only being in nature but doing things to help nature and help preserve nature. So, I came back [to school] and pretty much was like, ‘I think environmental studies is where I’ll start,” she said.

Since joining the E Club in 2018, Thompson has volunteered for several environmental cleanups, hikes, and water-quality testing efforts.

“We’ll find a place like Falling Rock or Shoal Creek, where we can clean up the environment and also take a hike,” she said. “We’ve not only done water testing but also held seminars for other people to be able to get certified to do water testing.”

Thompson does other environmental education-based work, as well, including holding an internship at the Birmingham Zoo. Every day, she stands close to or at an animal’s habitat, ready to give information to families and tour groups.

“No two days are the same,” she said. “You show up, and you might not do the exact same thing you did yesterday. Even if you end up in the same building as the day before, it’s never going to be the exact same because you never know what the animals are going to do. Animals do their own thing sometimes. Like this morning, we had an incident where we had to catch a bird. … The bird flew off, and someone had to catch it,” Thompson said with a chuckle.

Though the E Club had to cancel its annual Earth Fest, which usually is held around Earth Day (April 22) on UM’s Main Quad, because of ongoing pandemic restrictions, the group is planning other socially distanced environmental activities.

“We still want to kind of keep some sense of normalcy in the club, but we definitely want to keep it COVID friendly,” Thompson said. “The good thing about E Club events is they usually end up being outdoors or in a large area, where we can socially distance and keep things sanitary, so not too much has changed.”

What has changed, however, is the number of wildfires, floods, and hurricanes of historic proportions that have wreaked havoc across the U.S. Thompson believes it’s time for people to start taking environmental issues seriously.

“For some people it just takes it hitting close to home for them,” she said. “I think it’s more so about respecting Earth than being scared of it—you respect it for what you know it can do, for what you know it’s capable of. When you have that respect for what it can do, you don’t want it to happen, you don’t want to tempt it, you don’t want to push it over the edge. … Once people start respecting what’s going on and saying, ‘Crap, you know, maybe I should look at this event and how we as humans have taken part in or have some type of responsibility for what’s going on right now.”

The 2020 Cahaba River Fry-Down is interactive, free of charge, and available for viewing at https://frydown.swell.gives/, starting September 29 at noon through October 4.