Bessemer has become a city that is a marvel to behold.

Approximately, 5,000 jobs have been created for residents over the past 10 years—and that may be just the beginning.

“What I am most proud of right now is the type of businesses we’ve been able to recruit to the city,” said Bessemer Mayor Ken Gulley, who was first elected in 2010. “My objective has always been that everybody who wants a job can get a job. … Once you can have your citizens gainfully employed, that could help build the socioeconomics of your city. That has been very important to me.”

The Birmingham Times took a tour with Gulley to visit some of the main attractions in Bessemer, a city of about 27,000.

The tour began on a very bright October morning at the Bessemer Rail-Trail in the shaded former corridor of the Atlantic Coast Line Railroad that runs parallel to 14th Street and Berkley Avenue. The asphalt trail—for which the first phase was completed and opened in the spring of 2018 at just under half of a mile—is open to pedestrian and cyclists.

“We did phase one last year, but our objective is to continue to apply for federal funds for phases two and three in the amount of $1.5 million. This has really been a cooperative effort among federal, state, and city of Bessemer [agencies] to get where we are,” said Gulley. “We also are working on a pedestrian bridge, for which we’ve already secured funding, … that will [provide] connectivity of the trail to our Youth and Senior Recreation Center, so people will be able to park at the recreation center, get on the pedestrian bridge, walk across Highway 150, and walk [on the trail].”

Phases two and three will be completed by the end of this year or early next, said Gulley, who explained that the idea is to connect the Rail-Trail to other walking trails, such as Red Mountain, in addition to downtown Bessemer and the rec center. While these next Rail-Trail phases are still in the works, Gulley said, “Individuals enjoy getting up there walking. If you visit the part of the trail on Fairfax [Avenue in Bessemer] you can see much more. [The trail] has been very popular among our residents.”

The tour continued just across from phases two and three of the Rail-Trail to the Bessemer Youth and Senior Recreation Center, which opened in 2016. This facility is the first recreation center for all residents in the city’s 130-year history. (A previous rec center was segregated, so this is the first for all residents.) The city purchased the property at 100 14th Street South, formerly the site of Roosevelt Park and Davis Middle School, in 2013 and started construction on the $15 million project, which includes a gymnasium, an indoor swimming pool, an indoor walking track, an outdoor walking trail, baseball and softball fields, splash pads, a small amphitheater, an aerobics room, weight rooms, dance rooms, and a multipurpose room for banquets and other activities.

“We provide meals for the seniors there, as well as run the youth basketball, football, baseball, and softball programs,” Gulley said. “When building this center, we felt it was important to bring … all of these different programs under the umbrella of the city. … We’ve been able to coordinate those programs through the city and the rec center.”

The Youth and Senior Recreation Center, which currently has about 12,000 members, has been closed due to the COVID-19 pandemic. Linda Vinson, director of senior programs, said about 35 active seniors came to the center regularly before the shutdown to participate in a broad range of activities, including field trips and arts and crafts, as well as educational, fitness, and nutrition classes.

“We [also] have speakers to come in and talk about Medicare and Medicaid and different services for the seniors,” Vinson said, adding that the variety of program offerings make the recreation center an important staple of the community.

“Especially for our seniors, the main thing is to keep busy and move around because if you don’t exercise or use your brain, … things like Alzheimer’s and arthritis affect you more,” she said.

Carvana, a leading e-commerce platform for buying and selling used cars, has invested more than $40 million to construct an Alabama distribution and fulfillment center, which will create more than 300 jobs in Bessemer. The site where this facility is being built was the next stop on the tour.

Construction of the 200,000-square-foot facility on Morgan Road began earlier this year but was shut down for three months due to the COVID-19 pandemic. Work resumed in August, and the facility could possibly be completed by early next year, in time for a December 2021 opening.

Lou Ferdinando, a supervisor with Catamount Constructors Inc., said the site will have parking for 8,000 cars and a T-shaped building with office space and areas for car washing, detailing, and painting. The facility will also feature a 360 picture room—where full-view, 360-degree photographs of the vehicles are taken for posting on the Carvana website site—as well as a showroom.

Next stop: the Bessemer Airport. This city-owned, public-use airport was constructed in the early-1970s, covers 380 acres and is located southeast of the central business district in Bessemer. It is categorized as a reliever airport for the Birmingham-Shuttlesworth International Airport. The Bessemer Airport Authority (BAA) was established 30 years ago to manage, operate, and develop the facility, said Tim Wasyluka, BAA executive director.

“The airport is unusual in how big and capable it is,” he explained. “It has a 6,000-foot runway and can accommodate very large jets, … [so] it’s used a lot for business travel. Businesses based in the Birmingham area fly out of here on a national or international basis. … Several companies [across the nation] use this airport when they come to Alabama.”

A combination of more than 100 business and private aircrafts are based at the Bessemer Airport, which logs more than 100,000 flights. The airport also gets a lot of traffic depending on the sports schedules for the University of Alabama in Tuscaloosa (UA) and the University of Alabama at Birmingham (UAB), as well as the Southeastern Conference (SEC) Baseball Tournament, which is held a very short distance from the airport, at the Hoover Metropolitan Complex.

“Currently, the airport is building new hangars and expanding the runway. This year, we finished construction on a new hangar that holds 10 aircraft; it is similar to a storage facility, except it holds airplanes,” said Wasyluka.

The runway, which hadn’t been upgraded since it was built in the 1970s, underwent an expansion project that started in May and was competed in September.

“The [Federal Aviation Administration (FAA)] provided us with a $2.7 million grant to totally repave the runway and replace the lighting with new LED lights that have higher efficiency and higher brightness,” Wasyluka said. “The feedback from the pilots has been positive. The runway is very smooth, and it’s safer, too, because there were certain things included in the design and the surface … that are different than they were 20 or 30 years ago.”

The final stop on the tour was one of the most talked about economic development projects not just in Birmingham but across Alabama: the new $300 million Amazon Fulfillment Center, which opened earlier this year. The 855,000-square-foot building off Power Plant Road currently employs more than 1,500 full-time associates who retrieve, pack, and ship items. The announcement in June 2018 brought even more positive attention to Bessemer.
“The good thing about the center’s location is that it’s not far from [Bessemer High School],” Gulley said. “Some programs [have been expanded] to the students, so … they can come out here to work and actually earn money for college.”

Following the tour Gulley also pointed out the city was recently awarded a $300,000 Brownfield Assessment Grant from the Environmental Protection Agency (EPA), and that project will begin this month and downtown Bessemer has been named an Opportunity Zone and designated as a historic district. 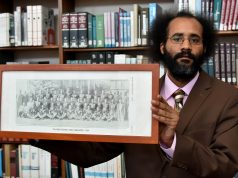