Black people occupy a place between hope and despair. We hope our nation will keep its promises – that all people are created equal, that justice is both blind and fair, that truth matters, that there is integrity. We struggle against the imperfections, the racism that is baked in the cake called the United States.

We fight to rectify historical wrongs, we pass laws to soften the sting of predatory capitalism. But we despair when we continue to see police killings of unarmed Black people when we tolerate a “leader” who would prefer a lie to the truth when more than 200,000 have died from COVID, and the “leader” who didn’t bother to wear a mask before he himself got infected.

No wonder that Breonna Taylor’s mother, Tamika Palmer, said, “I have no faith in the legal system.” Charles Booker, Democrat, a member of the Kentucky state legislature, said, “Justice failed us.”

How can Black people have faith in a system that minimizes our lives and our value? The roll is too long to call, but besides Breonna, there are others – Tamir Rice, Sandra Bland, Philando Castile, George Floyd. Cellphone recordings make it easier for us to see some of this police misconduct.

There is a straight line between the Dred Scott Supreme Court decision of 1854, the Black Codes and Jim Crow laws of the twentieth century, and the police massacres that have happened in the twenty-first century. The Breonna Taylor case is especially egregious. Police used a battering ram to enter a home in the middle of the night.

According to most witnesses, they did not announce themselves. Breonna’s boyfriend, thinking someone had broken into their home, shot, hitting a police officer in the leg. They responded with more than 20 rounds of ammunition, hitting Breonna at least six times. She died.

It took more than six months for the Kentucky Attorney General to convene a grand jury, and the grand jury indicted none of the three police officers who executed the no-knock warrant. The grand jury indicted one for shooting into a white neighbor’s house. They shot into a Black neighbor’s house, too, but no one has been indicted for that. The grand jury seems to have ignored discrepancies in the incident report, which no one can explain. No wonder Tamika Palmer says she has no faith in the justice system. No wonder so many other Black people look askance at the so-called justice system, which means “just us.”

The racism embedded in the criminal justice system erodes any faith we had in it. We are used to Black death. After all, thousands of us were lynched, and no one ever paid the price. Black Wall Street was destroyed and the only people arrested were some of the Black people who were victims of a rabid mob. Some faith in our system, even with its flaws, is central to the operation of our democracy. If we don’t believe in our institutions, we won’t respect them. That’s why we exist hope and despair, hoping our country will keep its promises, despairing that it cannot, or will not, make an effort.

The current President has spent his entire presidency undermining our nation’s institutions. He has undermined scientists, run roughshod over environmental regulations, flaunted every rule, and used our Treasury as a personal profit center. But the worse thing he has done recently is undermine our electoral system by indicating that if he does not win the election, it is because the election is rigged. He has refused to commit to a peaceful transition of power unless he likes the results and has suggested that mail balloting is fraudulent. He has repeated the allegations of is “widespread fraud” so frequently that many in his base believe it. He has used racist rhetoric to inflame his base, many of whom are domestic terrorists who travel, armed, from city to city, harassing protestors.

Trump does not care about the integrity of institutions. He cares about winning by any means necessary. Republican leaders don’t stand up to his perfidy because they support his results, if not his methods. Do they want to win at the expense of our democracy?

No faith in the judicial system eroded trust in the electoral progress, but resilient Black people still vote, protest, and legislate, because we must. Our historical memory demands that we resist. Our hope is the young leaders pushing for justice and change and rejecting this administration’s absurdity. 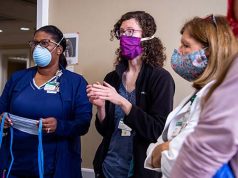