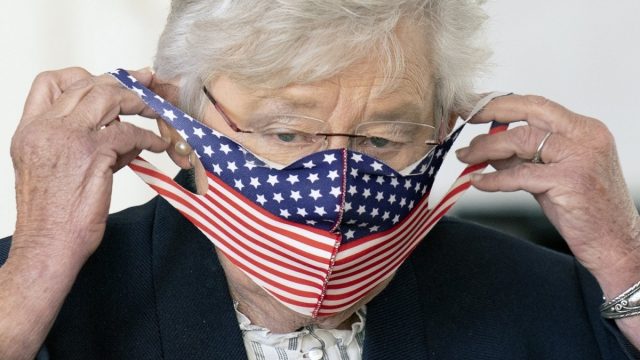 Alabama Gov. Kay Ivey on Wednesday extended through Nov. 8 the requirement for wearing masks in public, saying it is important that citizens can safely vote in the Nov. 3 general election.

The governor continued for five weeks the existing Safer at Home order, with most of the same guidelines on public gatherings and limits on business occupancies, along with the face-covering mandate that has been in effect since July 16. The mandate was previously extended in July and August, with the prior order set to expire Oct. 2.

Ivey made a “critical clarification” about hospitals and long-term living facilities, noting that one relative or caregiver is allowed to accompany or visit a patient. “Unfortunately, there has been too much confusion on this,” she said.

Ivey said there has been “real progress” statewide in fighting COVID-19. She said many have asked her why she isn’t following the lead of states that have reduced or ended health safety mandates. “Hopefully that can be sooner than later,” she said, noting that it is more important Alabamians safely exercise their “sacred duty” to vote in the upcoming elections.

The governor referred to the most recent of three visits to the state by Dr. Deborah Birx, of the White House Coronavirus Task Force, who last week praised Ivey’s health safety efforts.

“She said there’s no telling how many lives in Alabama have been saved because of this mask mandate,” Ivey said.

Ivey asked the public for continuing patience. She said “as much as we’d all like to get back to normal,” the risks are too great at present.

Alabama State Health Officer Dr. Scott Harris thanked Ivey for her leadership during the crisis, saying the death rate has fallen in September to the lowest average since the pandemic began. He said masks are “the main reason” for improvements.

“We are now at about half where we were,” Harris said, citing the statewide test positivity rate of 7.1% that is “markedly down since July.” He said the rate is still increasing in six of Alabama’s 67 counties.

“This mask ordinance is working,” Harris said. “It works and we have evidence of that.”

Harris said since April there have been nearly 155,000 confirmed cases of COVID-19 in Alabama, with more than 17,000 hospitalizations and 2,553 confirmed or probable deaths. About 65,000 people are presumed to have recovered from the disease.

The latest statistics from the Alabama Department of Public Health show more than 1.2 million people in Alabama have been tested for the coronavirus. Some 200,000 people have been tested in Jefferson County, which leads the state, as does the county’s number of cases (20,221) and deaths (352).

The governor’s office released charts of every county to show cases per 100,000 residents and test positivity rates going back to April 1 when the pandemic was beginning to take hold in Alabama. The latest charts for Sept. 1-15 show 16 counties with a positivity rate of 10.1% to 19.9% and two counties with rates of 20% or more. Eleven counties during the same time frame had 20 or fewer cases the previous two weeks, while the remaining 38 counties in Alabama fell into the bracket of 0.1-10% positive results from testing.

“When something is working as well as the mask mandate has since July 16, you stick with it,” Ivey said.