Alabama Gov. Kay Ivey extended until March 5 the Safer at Home order that requires wearing masks in public and mandates social distancing and sanitation measures in businesses and public places.

Ivey was joined by State Health Officer Dr. Scott Harris at a press briefing Thursday extending the order and providing an update on Alabama’s efforts to vaccinate the public against COVID-19. The current mask mandate and Safer at Home order was set to expire Jan. 22.

“A great many of us had hoped that as we began the new year we would no longer have to incorporate things like face masks and social distancing in our daily lives,” Ivey said. “But after the Christmas and New Year’s holidays, COVID-19 numbers and the number of hospitalizations were higher than ever – more than our highest point from last summer. At one point last week, of the 1,600 ICU beds in our state, 1,561 were occupied.”

Ivey said the current seven-day average of 2,666 COVID-19 cases per day is down slightly from the post-holiday peak but is well ahead of the pace in the months prior to the holidays.

“With that news, it shouldn’t come as a surprise that Dr. Harris and I are here today to extend the current order with no changes for another six weeks until March 5,” Ivey said. “The mask mandate remains the one step that we can all take in order to keep some balance in our daily lives and stay healthy and safe. Quite frankly, we’ve run out of ways to underscore the importance of taking this virus seriously. And, ironically, it’s not very complicated – wear your mask, wash your hands, sanitize the places where you are, and if you’re experiencing symptoms, please go get tested and wait until you receive the results before you interact with others.” 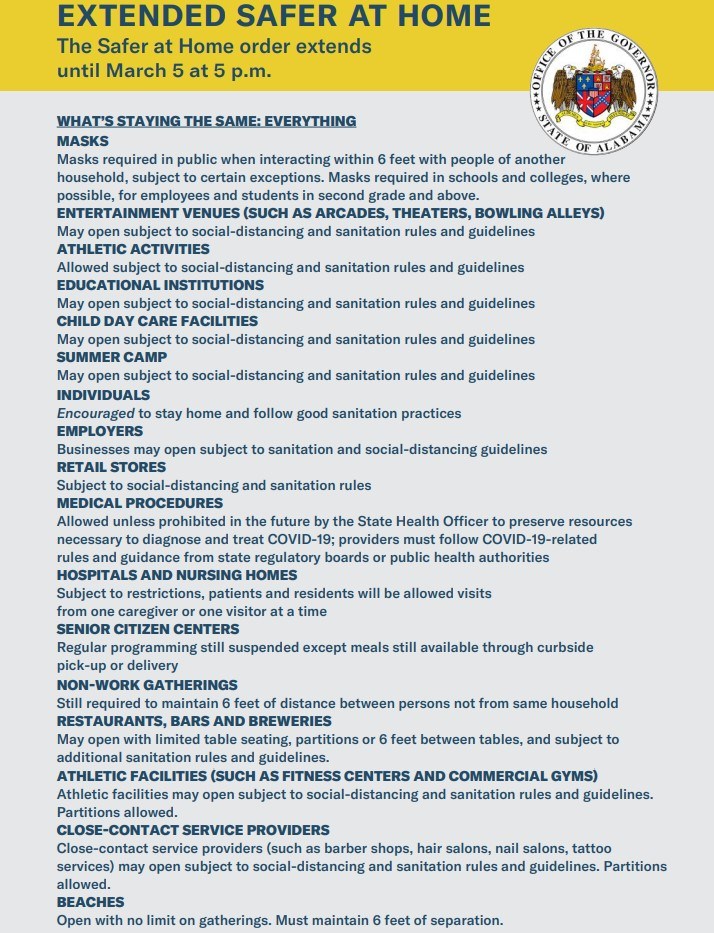 Ivey urged personal responsibility in battling the virus and patience as the state pushes out its allotment of the vaccines.

Harris said many are angry and frustrated at the pace of vaccinations, but he said the state is limited by a small allotment of doses. He said vaccines aren’t just sitting in freezers in the state for no reason. Rather, nearly all of those doses are second doses for those who have received the first dose in a two-dose regiment or those who have made a reservation to receive a first dose.

“Our county health departments who are doing vaccinations are under instructions now to do vaccinations all day every day until they run out,” Harris said.

As of Wednesday night, Alabama had administered 202,643 doses, based on what has been reported to the Alabama Department of Public Health (ADPH), Harris said.

Harris said there are 502 approved locations around the state prepared to provide vaccinations, but only half have actually received vaccines thus far due to shortages. The state gets between 50,000 and 60,000 doses per week and that’s not expected to change any time soon, Harris said.

Harris said in the instances where there are locations not administering doses quickly enough, the ADPH is moving the doses to locations that have run out of vaccines. He said those moves are being done without penalizing the rural areas where access to care is understandably slower than other parts of the state.

Harris also said the state has reached its own agreement with Walmart to begin administering some of the state’s allotment of the vaccine. That deal is separate from an expected program that will provide the vaccine through a federal allotment, Harris said.

Harris said Alabama is in conversations with another large pharmacy chain to help administer the state’s allotment.

Harris and Ivey again urged that only those who are eligible should be making appointments for the vaccine at this time.

Harris said Alabama will do large-scale vaccinations like other states once there are enough doses. He said the state is studying new vaccination plans from the Biden administration to determine how they might affect Alabama.

Despite the holiday surge of cases, hospitalizations and deaths, Harris said he is encouraged that there is now a path to end the pandemic.

“We have a means to get to the end now with vaccinations and we’re getting there as quickly as we possibly can,” he said.