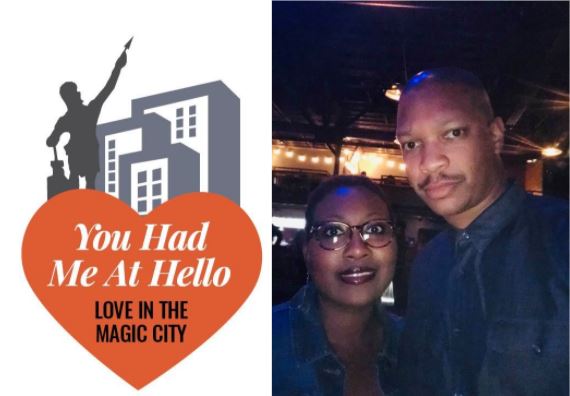 James was hired to replace someone at a PR firm in Birmingham, so he moved from Mississippi to take the position. The firm held a going away party at Bombay in Lakeview, and James and Marie attended the party.

“I saw Marie walking across the street. She had on a black wrap dress and she was very beautiful. She came in and sat down beside me. I had only been in Birmingham for two weeks and didn’t know anyone, so we started talking,” he recalled.

“I don’t usually sit next to men I don’t know, but the party was packed, so I sat next to him,” Marie said. “He was a very dapper kind of dude. He was handsome too. It felt very natural.”

“I think my boss was observing how Marie and I were getting along,” James said. “Marie was a reporter at the Birmingham News at the time, so my boss paid for us to go to lunch not long after. That was kind of our first date.”

First date: Cameo’s downtown in September. Marie clarified the first date was more like a lunch. “As a reporter, I went out to lunch with people a lot,” she said.

James said the lunch was a good chance to get to know Marie. “I learned a lot about her. She knew a lot of people, she was very well liked.”

Aside from Cameo’s, they went salsa dancing sometime that year, Marie said. “We went to this place and we had drinks. We don’t drink anymore, but you know, music was playing and no one was dancing. He asked me if I wanted to dance, and we did when no one else was. It was very cool and very bold. Kind of like in the movies. That got my attention,” she said.

The turn: “For me, it was the fact that we were friends,” James said. “We could talk about a lot of different things. It was easy to talk to her, and I never really experienced that, not to the degree I did with Marie… My friends and family really liked her. We really liked each other, and that turned into love,” he said.

Marie agreed. “James and I clicked, and we were extremely close. He had a lot of integrity, which was really important to me. You don’t want to be with someone who isn’t a person of their word, and I knew I could trust him with my heart because he was demonstrating on a daily basis that he could be trusted. He also saw God about our marriage,” she said.

James began a fast to see how they should proceed. “I don’t believe in making major moves in my life without asking God for guidance. I didn’t eat for seven days, only water. The focus of that petition to God was confirmation and clarity for the ministry I was working on at the time, and for Marie . . . It was right and true. After the fast, I called her and told her, and the proposal came after,” he said.

Proposal: December 2004. They held a Christmas party for the church they attended at the time, First Church Worship Center in Tarrant. “I had been paying for the ring at the time. I found it in Mississippi, me and my best friend Albert went to a jewelry store. So Albert came from Mississippi to our Christmas party, and his job was to bring the ring with him,” James said.

“We got ready to close the event and I went up and said everything she meant to me and I got down on one knee, pulled out the ring and proposed to her,” James said.

Marie said she was clueless. “We were so busy running around trying to put this event together, it didn’t even dawn on me. I remember for a moment thinking, good Lord, why are all these folks coming up from Mississippi for a church party?” she laughed. Marie’s family was there, too.

“We were wrapping up the party and standing in front of the crowd. And as we were about to say our ‘thank you’s’, James was like, I just appreciate Marie and love her. I’m like, oh that’s so sweet, OK, wrap it up,” she laughed. “He pulls out the ring box and I’m like, ‘oh my God, he’s proposing. I was so moved.”

Wedding: The wedding took place at More than Conquerors Faith Church in West End. Pastor Steve Green officiated and the colors were salmon pink and rose.

“We had about 300 people to attend, mostly James’ people from Mississippi,” Marie said. “It was touching too, because my brother was in the wedding and he didn’t think he’d be able to get back in time [from serving in the military], but he got a chance to walk my mother down the aisle. It was a beautiful ceremony,” she recalled.

Most memorable for the bride was the singing. “His Mississippi folks came and sang in the wedding, so much so that people wanted to buy the CD,” she said.

“It was extremely uplifting and spiritual. The singers were professionals, and when they were finished singing, [Pastor] Green went straight to them and booked them for the church’s anniversary,” James added.

James broke down crying when he saw Marie coming down the aisle and said that was his most memorable moment. “I just lost it,” he said.

The Suttons had their reception at the Birmingham Civil Rights Institute. The honeymoon was eventful. “We flew to Miami and we got on the boat. We sailed to the Bahamas from there. We got off the boat and we found this rock on the beach… When I found it, I was like oh my God, I gotta take this home. This rock represents Jesus, and it will build our marriage,” James said.

“I took a sharpie and wrote ‘James and Marie Forever’ with little hearts and the date,” he added. The couple still has the rock to this day.

James also tried to teach Marie how to swim during their honeymoon. That didn’t go well, he said. “It was like the first problem in our marriage,” James joked. “There were like, thousands of these little minnow fish in the ocean, and she freaks out and gets out of the water. These little kids came around and started making fun of her. [The fish] weren’t gonna bite,” he said.

“We went to another hotel in like, and we were in the pool. We were kind of getting somewhere, but we basically just stayed in the hotel,” James said.

“We ordered the best chicken parmesan in the world [at that hotel],” Marie said.

Words of Wisdom: “You cannot have a successful marriage without God. Period, point blank,” Marie said. “You have people from two different people from backgrounds who were raised differently, so sometimes it can be a battle of wills. But if you have God, then He will supersede. And of course, you’ve got to have love. Try not to forget why you fell in love with that person and why you chose them. God will help you to remember, too,” she said.

James agreed, and added, “Marie and I are at our absolute best when we are investing in our marriage. When we are engaged and connected with each other. There were things that we were doing early [in their relationship] that we just kind of let fall to the side, and that caused problems and setbacks. Once we had kids, we weren’t dating as much, spending time together or going out. When we do those things, when we prioritize each other, that’s when we’re at our best.”

Happily Ever After: James and Marie have two children, Simone, 13, and Steve, 12.

Marie is a Birmingham native. She attended Stillman College in Tuscaloosa, Alabama and majored in English and mass communications. She received a Master’s in English from the University of Alabama at Birmingham and is currently the director of marketing and communications in student affairs at UAB. She is also a breast cancer survivor of two years.

James is a native of Pearl, Mississippi. He attended Mississippi College and majored in public relations. He holds a Master’s in Divinity from Samford’s Beeson Divinity School. He works with the Dannon Project as a mentor coordinator and instructor.