Five Points West—nestled among the Ensley, Smithfield, and West End communities—consists of Belview Heights, Bush Hills, Central Park, Ensley Highlands, Fairview, and Green Acres. Each of the six neighborhoods that make up the area witnessed at least one homicide last year, according to AL.com.

During a recent interview with the Birmingham Times, Gunn said he believes the violence has taken a turn for the worse.

“I think it’s mostly young people doing all of this killing and shooting [because there is a] lack of opportunities. Also, many are holding grudges, getting upset with others, and believing the only way to [deal with it] is to pick up a gun and start shooting.”

Gunn added that city officials are doing all they can do to put an end to the violence.

However, Gunn and other residents in the Five Points West community said many challenges remain.

“You can institute programs to try to curb [crime] or whatever, but a lot comes down to people knowing what is going on, but [those committing crimes] have this thing about ‘no snitching,’ so nobody wants to tell on anyone,” he said. “The city can’t solve the crime if nobody says anything. They can’t be everywhere at all times. A lot of times, crime happens when the police are not around.”

Susan Palmer, former president of the Central Park Neighborhood and resident of the community for more than 30 years, said she’s upset about the violence and “more upset because crimes are not being solved . . . The mayor and the city council are not committing the crimes, but they are held accountable,” she said.

“Police need to get to know the community and vice versa. … The need to know that we [in the community] are here, we’re not going anywhere, we’re here to resolve the problems and communicate with you and have dialogue,” she said, adding that police need build relationships with the people in the neighborhoods “because there is a fear factor in our area. … People are afraid to say something if they see crime happening; they’re afraid to go outside. … There has to be a rapport between the police officers and the community, and it has to be strong and not weak—if it is weak, it is not going to work.”

During the first 10 days of April, there were nine killings in Birmingham, a span of “unimaginable” violence, according to the Birmingham Police Department (BPD).

On Wednesday, a victim was found dead at an east Birmingham apartment complex, the city’s 39th homicide of 2021; three of those homicides were ruled justifiable as self-defense by investigators or prosecutors. Even though the city has recorded one less homicide through May 12 of this year than at this time in 2020 the deaths are adding up. 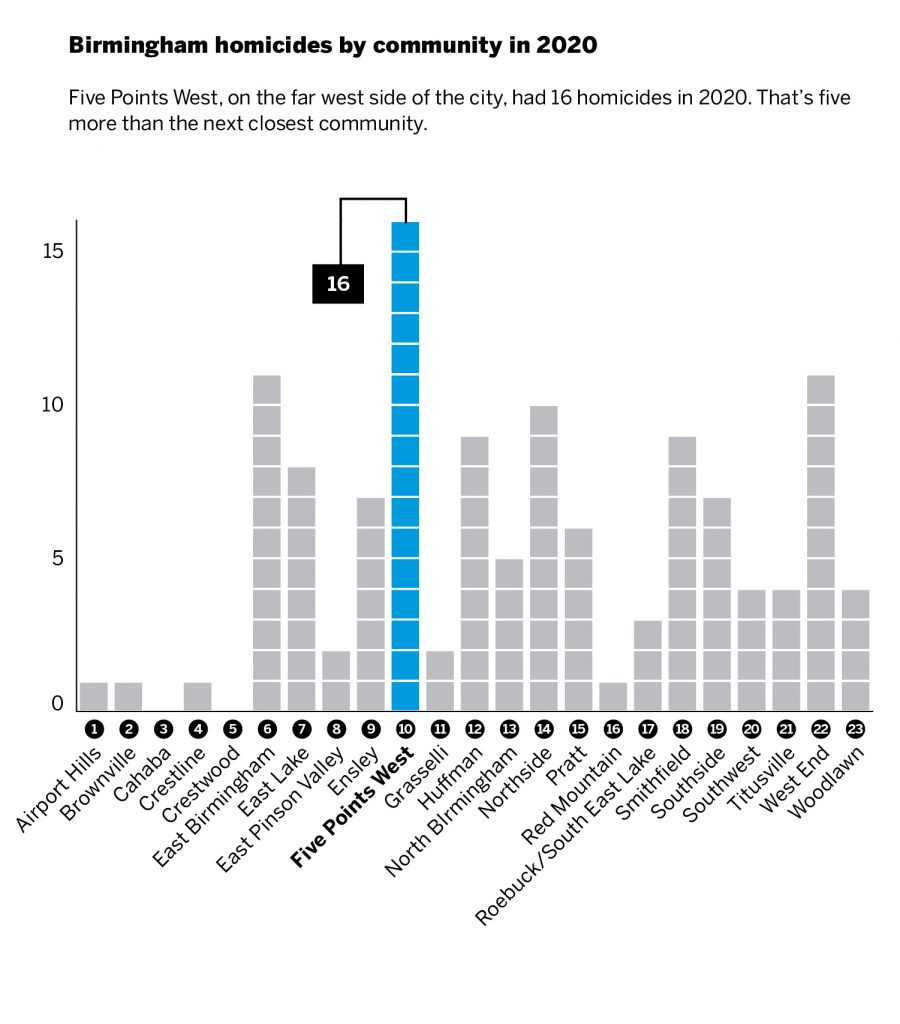 Still, some residents believe all is not lost.

Dora Sims, vice president of the Bush Hills Neighborhood Association said residents have been working with Woodfin and the BPD to make the community safer.

“We’ve met with some of the city staff, and we have organized a community policing initiative that covers the six neighborhoods in Five Points West in an effort to address crime,” said Sims, describing a series of meetings with city officials, including Woodfin and Smith, as well as Edwin Revell, director of planning, engineering, and permits.

“We feel like we’re making progress,” she said, adding that a framework is being developed for the plan, and efforts are being made to improve lighting and increase police visibility in neighborhoods.

A safe community is also important for businesses in the area, Sims said.

“We want to make sure we are supporting and standing behind them,” she said. “If anyone has an aspiration to open a business in Five Points West, we want to be sure they know the community is safe and the neighborhoods are behind them.”

Sims believes residents can make a difference if they are involved and informed.

“I would encourage [residents] to be part of this quarterly block watch meeting, so they can meet with the precinct captain and share things with [the police],” she said. “I think all of our neighborhoods need to work in the same capacity with [the block watches], so all neighborhoods are educating their residents on what services are being provided.”

“If we educate our residents, the six neighborhoods working together and being part of this quarterly block watch meeting will help people know who they can reach out to if things occur,” Sims added.

Click here to read more stories about what residents have to say about the recent uptick in crime.