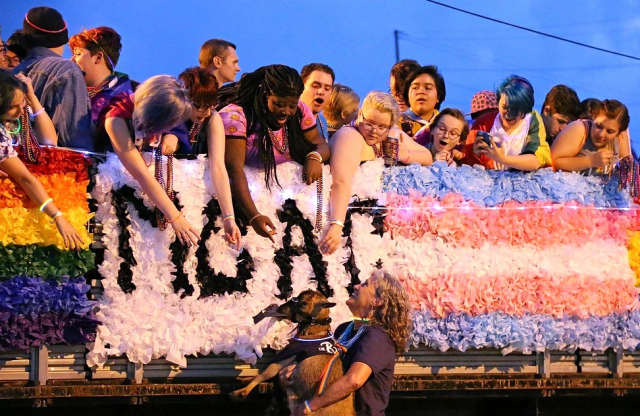 June is National Pride Month and Birmingham is dusting off its rainbow flags, dousing itself in glitter and joining together to celebrate and support the LGBTQ+ community. Pride Month is a national recognition held every June in tribute to those involved in the Stonewall Riots, an incident that occurred on June 28, 1969, when New York City police raided the Stonewall Inn, a gay nightclub. The incident led to riots outside in which several people were injured and marked the beginning of a movement to outlaw discriminatory laws and practices against LGBTQ Americans.

On June 11, 1999, President Bill Clinton issued a proclamation to celebrate the anniversary of Stonewall every June in America as Gay and Lesbian Pride Month.

From fundraisers to parties, here’s your guide to PRIDE in The Magic City.

The BPL is hosting four Pride Month programs during June that will air on the BPL Facebook page every Thursday, starting on June 3.

Where can you find disco dancing and baseball? At Regions Field on Birmingham Barons Pride Night on Friday, June 4.

On this special night, fans can enjoy:

If bowling’s how you roll, then head to Bowlero in Birmingham on Wednesday, June 9 for Pride Bowling. Music, flashing colors and loads of fun… count me in!

Prepare to scream during the Loud and Proud: Pride Drag Show at Saturn in June. Showtimes are at 7 PM and 9:30 PM. Here’s who’s starring in each:

On Saturday, June 12, Avondale’s Entertainment District will be live with PRIDE during Pride Fest 2021.

Running in conjunction with Eat in the Streets, this family-friendly festival is a time for the community to join together for a day of love and celebration with:

Strap on your roller skates and show off your pride during Pride Skate Night at Skates 280. Music and the chance to boogie on roller skates… what more could one ask for? All ages welcome.

Mark your calendar for the talent competition you’ve been waiting for—Pride Idol. On Thursday, June 17, singers, dancers, comedians and more take to the stage of the StarDome to wow the judges in hopes of winning the title of Central Pride’s Pride Idol.

The winner of the event receives a cash prize and the opportunity to showcase their talent at CAP events throughout the reigning year.

Ghost Train Brewing celebrates all things PRIDE with a Pride Dance Party on Saturday, June 19. Here’s what to expect:

–A full menu from Chef Nick + his crew

Patience Itson of bhamnow.com contributed to this report. For more on the modern, mobile guide to Birmingham visit www.bhamnow.com