Geno Reasor, who works with the city’s Department of Innovation and Economic Opportunity, was in Fountain Heights this week on business, when he saw cars crammed into a parking lot outside of the community’s recreation center.

“We go inside, and it’s a full-blown job fair,” Reasor said. “It was awesome…we were very interested in the companies that were there because most of them were Birmingham-based companies.”

Lamar Benefield, 26, a Birmingham resident and community organizer, planned the fair, he said, because of the many people looking for employment following job losses and other struggles during the COVID-19 pandemic.

“This was the perfect opportunity to help the community, to do a community engagement project,” said Benefield.

Among the 25 employers at the event were University of Alabama at Birmingham Medicine, Buffalo Rock, Stivers Ford of Birmingham and Amazon as well as hotel, warehouse and defense jobs representatives.

Organizing the event was not difficult, since he felt compelled to do it, said Benefield, a Druid Hills native.

“I just want to help people. It’s the little things, I actually like putting events together, and when I saw something to help, I went right for it,” he said. “It just came out of my heart to do. I just woke up one day and decided to do it.”

Prior to organizing this job fair, Benefield founded Brothers and Sisters Inquiring Change (BASIC), a charitable organization that helps homeless people and that was before he had even graduated from Miles College.

Benefield studied mass communications while at Miles, which he said gave him the tools to organize things like the job fair.

“I had a professor by the name of [Dr. Idrissa N.] Snider. She was my public relations professor, and she was on me a lot. She taught me the ropes about public relations and how to put an event together,” Benefield said. “You have to have a cause when you want to do something on a scale like this.”

Wednesday’s job fair will not be a one-off, said Benefield, and the next one is likely to be even bigger.

Reasor said he will attempt to have the city collaborate with Benefield on doing more job fairs.

“I’m going to bring this back and push this as an idea out of our office of innovative economic opportunities to partner and collaborate with Parks and Rec to possibly bring these job fairs to different rec centers throughout the city, in collaboration with [Benefield]…He deserves to be in the creative process of putting this together,” Reasor said.

Though tentative, Reasor said he would like to see an event like Benefield’s in Birmingham Jefferson Convention Complex’s Legacy Arena.

“I don’t want this to be the last event. I want to do some more events that can potentially help more people,” Benefield said. “I just think that this is the best time right now.” 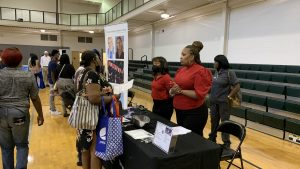 A full list of the companies that were present at the job fair is below:

– Personnel Board of Jefferson County