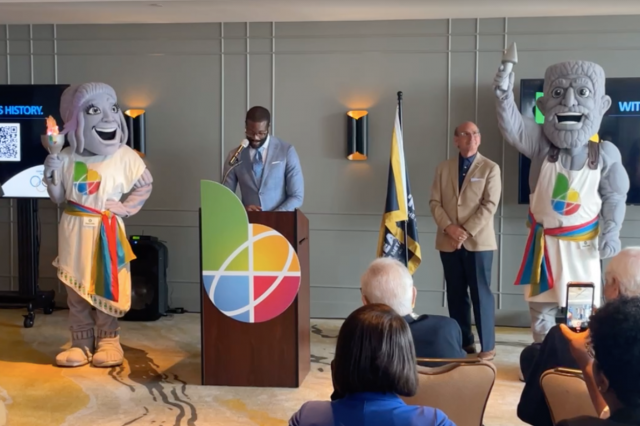 Exactly one year from this week, The World Games 2022 will kick off in Birmingham, and city leaders and organizers on Wednesday unveiled two mascots who will be front and center for the events — Vulcan and Vesta, his feminine counterpart.

“Vulcan watches over the city reminding us of our roots and the magic we share, as the largest cast-iron statue in the world…We are pleased to be in partnership with Vulcan Park and Museum and are very thankful for their continued support for the games,” said Mayor Randall Woodfin. “Today, Vulcan has a new international job, and for the first time, he has a partner to share with that fun.” 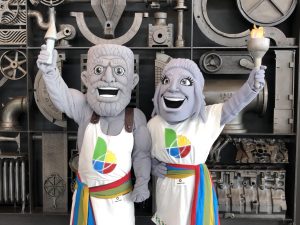 “As the head cheerleader of team Birmingham, I’m very excited about what we have to offer and what we will show the world in 365 days,” Woodfin said.

The World Games, held at sites around the metro area from July 7-17, 2022, features sports mostly unseen in the Olympics, including flag football and softball, as well as more unusual offerings like artistic ice skating and breakdancing. It will feature 30 official sports in 54 disciplines which will be contested at 30 venues across the Birmingham area.

This monumental event is a way for Birmingham to reveal its character to the world, according to the mayor.

“I think what makes Birmingham very unique as it relates to all the cities in the South is that it’s not just the word ‘southern hospitality,’” Woodfin said. “We actually live it, we breathe it, it filters through all of us and every fiber of this community, and we literally get to show that to the world.”

“The world will be looking at Birmingham and the state of Alabama, and that is a huge happening for our city,” he said. “We will be, for 10 days, on the world stage next year.”

Though originally set to begin Wednesday, July 7. the World Games was delayed, like many other sporting events in the last year, because of concerns over the COVID-19 pandemic. Nick Sellers, an Alabama Power executive and the CEO of the World Games 2022, said the upcoming Tokyo Olympics will be restrained, leading people to look at Birmingham.

“At the conclusion of those summer games, the eyes of the international sporting world turn to the state of Alabama and to Birmingham for World Games 2022,” Sellers said, “and they will see…some of the most incredible athletes competing in the fastest-growing sports in the world.”

The World Games is estimated to have an economic impact of $256 million for Birmingham, but according to Frank Brocato, mayor of Hoover, that money will go to more than just businesses within Birmingham city limits because 22 Alabama mayors as well as the Jefferson County Commissioners signed an agreement in pursuit of cooperation.

Tickets are now on sale and can be purchased at https://twg2022.com/tickets/