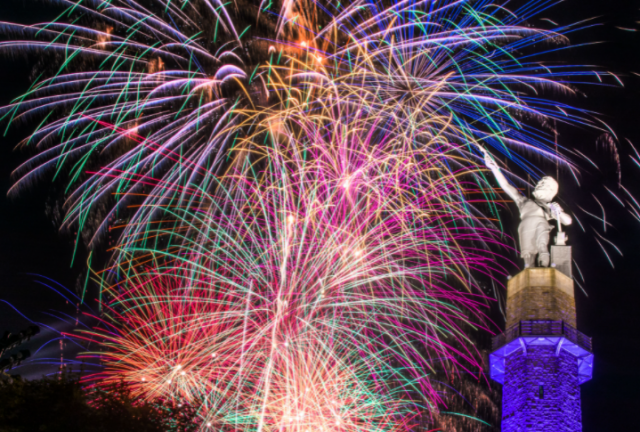 The city of Birmingham is celebrating its 150th anniversary in 2021, and it’s not a surprise that Vulcan will be on top of it all.

Vulcan, a landmark that symbolizes Birmingham’s roots in the iron and steel industry, stands tall atop Red Mountain and will oversee Alabama’s largest Fourth of July celebration, an event that will feature an array of fireworks honoring both the city’s sesquicentennial and the nation’s birthday.

The Medical Properties Trust Thunder on the Mountain—which begins at 9 p.m., on July 4—is presented by retailers Hibbett Sports and City Gear and the University of Alabama at Birmingham (UAB) Callahan Eye Hospital.

“It will be different because it is a bigger show this year,” said Darlene Negrotto, president and CEO of Vulcan Park and Museum (VPM). “The length will be the same, but there will be more pyrotechnics. … This year, we will have a special focus on Birmingham and some of the music that comes out of Birmingham.”

Few attractions in the city are as well-known or recognized as the 56-foot-tall statue of the Roman god of fire, metalworking, and the forge that touches nearly every aspect of Birmingham’s culture and history, making this year’s show more appealing.

“Vulcan was created when our city was very young to represent our city, our state, and the natural resources that were abundant here,” Negrotto said. “He was our ambassador to the world at the St. Louis World Fair in 1904. Back in that day, … people would make the very long journey from all over the U.S. and around the world to get to these world fairs so they could learn the latest in resources and what opportunities there were in other parts of the world.”

Vulcan was a hit at the world’s fair, winning grand prize at the Palace of Minds and Metallurgy.

“Back then, people were taught mythology, so they knew right off that Vulcan was a blacksmith, and he created the weapons for the other gods,” Negrotto said.

“He was a working god, and he represented [Birmingham] as a working-class community, as well as [the city’s] industrial life and natural resources.”

Something else about Vulcan that stood out—literally—was his size, which communicated that Birmingham had the capability and technical ability to “cast a quality product in a 50-ton statue that was a marvel at the time,” Negrotto said.

“A lot of cities may have been interested in the iron industry and building the iron industry, but they weren’t advanced enough to be able to cast something that solid,” she added. “[Similar structures] sometimes would just crumble because they didn’t have the right recipe, if you will, for creating that iron.”

That aspect of Vulcan made the statue “symbolic on several different levels,” Negrotto said.

“He represented our city—his size, his stance, his gaze toward the spear point he has just crafted, looking at it to make sure he did a good job with it. That is an inspirational stance, so [Vulcan] inspired people to move their families and their businesses to populate our region and build the new, young city of Birmingham,” she added.

Today, the 117-year-old Vulcan, the largest cast-iron statue in the world, is the focal point of Vulcan Park and Museum, which features views of Birmingham, an interactive history museum that has been open since 2004, and a 10-acre urban green space.

It makes sense for Vulcan to be part of the city’s sesquicentennial, Negrotto said: “Vulcan has stood for the region for the majority of [Birmingham’s] 150 years. He represents the hard work and sacrifice upon which our community was built, so it just makes symbolic sense for him to be the centerpiece for the show.”

Geographically it makes a lot of sense, too, she said, “… because he sits atop Red Mountain, and you can see him from miles away.”

The July 4 pyrotechnics will be choreographed to a musical score and synchronized for a dramatic effect. The music, as in past presentations, includes different patriotic favorites from various musical genres, so it will appeal to a variety of musical tastes, with a special focus on Birmingham and some of the music that comes out of the city.

“We recognize an opportunity to ensure that everybody in the community can enjoy the show and the musical accompaniment, so we incorporated diverse musical styles,” Negrotto said. “We also recognize that sense of patriotism and that celebration of the freedoms that we enjoy in our great country. The show will provide an opportunity to celebrate how wonderful our community is.”

Negrotto and city officials recently gathered at VPM to announce activities for Birmingham’s 150th anniversary. Founded on June 1, 1871, by real estate promoters who sold lots near the planned crossing of the Alabama and Chattanooga and South and North railroads, Birmingham was incorporated on Dec. 19, 1871.

Among the activities for the city’s sesquicentennial, according to Mayor Randall Woodfin, will be a photo competition for which residents can submit pictures of events, landmarks, and people around the city; some of the submissions will be selected for a showcase at the Birmingham Museum of Art.

“This is our opportunity to celebrate not only Birmingham but also the people who live, play and work here,” Woodfin said.

The photo competition is in line with other social media initiatives already announced by the city, such as Milestone Monday, for which stories about and pictures of people, businesses, and other organizations in the community are posted online to celebrate milestones.

There is also the “I Love Birmingham Because …” letter-writing campaign, for which residents can submit letters with a maximum of 150 words detailing what they love about Birmingham; the submissions will be put into the archives at the Birmingham Public Library “to be stored as part of our history,” Woodfin said.

Another activity, “The Birmingham View” challenge, is a photo contest for which people can submit pictures of Vulcan or taken from Vulcan, and “Did You Know,” a social media campaign designed to share facts and info about the history of Birmingham and Vulcan.

“We want to encourage people to participate in the 150th-anniversary activities,” Negrotto said.

Where: Anyplace you can see Vulcan—a spot in your backyard, a parking deck downtown, up on Shades Crest Mountain. The event will be broadcast live on WBRC-TV Fox 6 News throughout north central Alabama, and the synchronized musical score will be aired on iHeart radio stations (including 102.5 The Bull, 103.1 The Vulcan, 103.7 The Q, 104.1 The Beat, Birmingham’s ALT 991, B106.5, 105 Hallelujah FM, Magic 96.5, News Radio 960 WERC, News Radio 105.5 WERC) and Hispanic radio station La Jefa (98.3 FM), which will translate Birmingham Mayor Randall Woodfin’s address into Spanish for its listeners.

The fireworks will be launched from the grounds of Vulcan Park and Museum (VPM). For safety reasons (the area is a fall-out zone for the fireworks), the park will close at 6 p.m. that day. People can come out ahead of time and watch the crews set up the fireworks; it takes three days for a crew of six or seven people to set up the display, which is made up of thousands of shells and nearly seven miles of wire, all connected to a control panel.

Cost: Free. Events are organized by the Vulcan Park Foundation and sponsored by Medical Properties Trust; retailers Hibbett Sports and City Gear; and the University of Alabama at Birmingham (UAB) Callahan Eye Hospital.

COVID-19 Restrictions: “We urge to people to follow [Centers for Disease Control and Prevention (CDC)] guidelines. We also urge those who have not been vaccinated to stay at a safe distance,” said VPM President and CEO Darlene Negrotto. “No matter what, we urge everyone to be safe when they gather with their friends and family.”