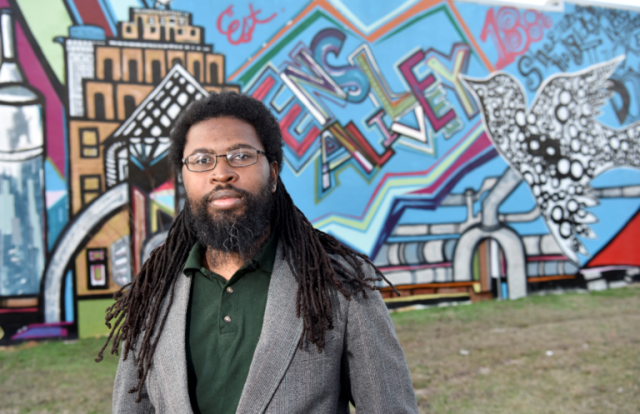 Heartfelt tributes are pouring in across social media after the death of Brian Hawkins, the popular Birmingham spoken word artist and community activist best known by his stage name “Voice Porter.”

Hawkins was found dead in his Warrior home at age 42 on Wednesday, according to an article by Shauna Stuart of al.com.  Officials say the cause of death has not been determined.

Voice Porter was the longtime host and creative director of Bards & Brews, the Birmingham Public Library’s popular monthly spoken word poetry/craft beer event celebrating its 11th year. BPL is working on details for a tribute to Voice Porter that will be announced soon.

Voice Porter made his last public appearance as host of Bards & Brews during its poetry event held August 13 at the Central Library.

Birmingham Mayor Randall Woodfin made a Facebook post in tribute to Voice Porter today. The mayor said, “The entire city of Birmingham mourns the loss of Brian Voice Porter Hawkins. He was a true advocate for our city, unapologetic in his truths and his words never failed to stir us…”

Jahman Hill, a poet, playwright and adjunct professor of gender and race studies at the University of Alabama, said Voice Porter was his mentor. Hill said he is still processing the impactful loss to Birmingham Voice’s death has caused

“He was my introduction to poetry in Birmingham through Bards and Brews, Hill said. “On Sundays at the Carver Theater, I would drive an hour to Birmingham just to be a part of the scene and he would remember me. When I was nobody, he gave space and celebrated every performer on the mic.”

Hill added, “His name was Voice and he helped us find ours. He gave our voices a mic, whenever and wherever he could. You can’t talk about Birmingham poetry and spoken word without Voice. I love him so much. He gave me and so many of us opportunities to shine, reasons to stay in Birmingham, reasons to support each other.

“As a poetic voice representing this area, he eloquently spoke on relationships, current events, and much more,” Lovell said. “He often encouraged others – myself included – to do the same. As a ‘porter,’ he cared about bettering his community.  The community in which he grew up. The community in which he lived. The community of artists that he loved and so loved him.  I do wish his family, friends, and colleagues true peace and comfort. Rest in power, Brian.”

A Birmingham native, Voice Porter’s inspiring original poetry and stage presence helped build Bards & Brews into an event “that unifies the Birmingham arts community,” as highlighted in this April 2019 article in the Birmingham Times.

Voice Porter built a name for himself as a poet, artist, musician and gardener While hosting Bards & Brews events, he loved to share his passion for local artists through his popular phrase SOAP (Support Our Artists Please).

Voice also gained nationwide recognition as an advocate for the arts on August 23, 2019, when coffee giant Starbucks featured Voice in a series of national spotlights called “Starbucks Stories.”

The article talked of how Voice Porter got his start as an artist at 11, when he and his cousin, Sherman, both in elementary school, joined two employees from the Birmingham Museum of Art to paint a tribute to a teacher who had died.

In the Starbucks spotlight, Voice Porter shared his passion for public art and said if he could paint a mural for the whole world to see, he would make it one about what’s happening in the world – the pain, the melancholy, the hope. He shared that same passion in his poetry.

“I would hope that they would spend 15 minutes looking at it, and in that time find such a range of emotions that it brings them to the middle, and to a space where they can think about what’s happening in the world. They can think about the subject matter, about how they fit into whatever we’re talking about, how they fit into this narrative, and how we can work together to change it,” he said. “I do feel hopeless sometimes. But what gives me hope is just watching people be the best person they can be for no other reason than to be the best person they can be – and knowing that being a great individual can help other people be great individuals. That is a thing that brings me joy.”

Starbucks CEO Kevin Johnson was so impressed with Voice Porter that he asked for an animated version of the poem “To Be Human” play right before his keynote speech at the 12,000 participant Starbucks Leadership Experience. Porter flew up to Chicago where he had a personal sit-down chat with the Starbucks CEO.

BhamNow highlighted that meeting in a tribute article on Porter that ran in November 2019, “5 Reasons Why Birmingham Needs to Know Brian ‘Voice Porter’ Hawkins”