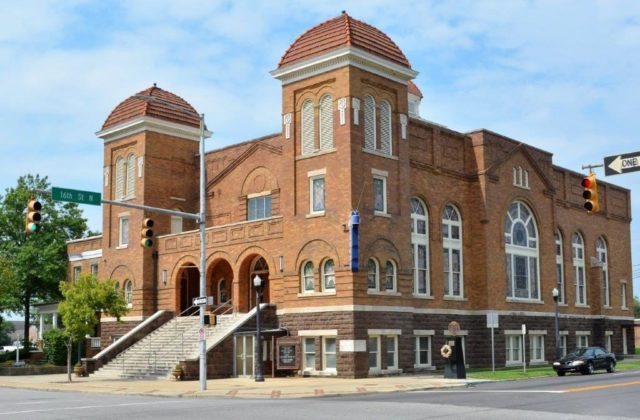 Looking back but pressing forward, the historic Sixteenth Street Baptist Church will commemorate the 58th Memorial Observance of the church bombing on Wednesday, Sept. 15, at 10 a.m.

The Carlton Reese Memorial Unity Choir will provide musical tributes. The church bells in downtown Birmingham will toll at 10:22 a.m., the time that the bomb exploded. A memorial wreath will be laid immediately following the service.

The Rev. Dr. Charlie Dates, Pastor of The Progressive Baptist Church of Chicago, Illinois will give the reflection. The church was bombed on September 15, 1963 killing Carole Robertson, age 14; Cynthia Wesley, 14; Addie Mae Collins, 14; and Denise McNair, 11.  In addition, many other individuals were injured.

The church also continues to receive federal funds to maintain its role in the national’s Civil Rights history most recently a grant of $500,000 from The National Park Service. The grant is the second out of five previously awarded funding initiatives towards the current restoration of the church and its historic parsonage, resulting in $2.8 million overall in funds.

The parsonage played a pivotal role in Birmingham’s civil rights history in the 1950s and 1960s, serving as a hospitality center for leaders planning Civil Rights marches that emanated from the church.

“We count it a privilege to continue to show the world God’s redemptive power in the midst of human struggle and the tragedies endured here in Birmingham during the Civil Rights Movement”, said Rev. Arthur Price Jr., pastor of the church.

The new grant will be used to “continue the work, ensure that the parsonage is safe and accessible, and contribute to the completion of the Birmingham Civil Rights National Historic Monument…Sixteenth Street Baptist is one of the seven sites affiliated with the monument,” said Chairman of the Board of Trustees, Theodore Debro.

The renovation begun in September of 2020 and is set to be completed in two phases according to Debro:

*The first phase, which will be completed by the end of this month, consists of exterior restorations that will include the restoration of bricks, foundation, roof repair, and an installation of an ADA-accessible ramp.

*The second phase will start immediately after the first phase and will consist of interior renovations that include repair and restore of plaster finishes, wood trim and floors, restoration of windows, and an upgrade on electrical units within the church.

After the horrific bombing of the church in 1963, the parsonage also was the site where Dr. Martin Luther King and other faith leaders planned a funeral for three of the four young victims and began the difficult work of racial healing and reconciliation in Birmingham.

Like the Sixteenth Street sanctuary, the parsonage is also historically significant because it was designed by Wallace Rayfield, one of the nation’s first African American trained and licensed architects.

“We believe that preserving the 16th street parsonage and highlighting Wallace Rayfield is a dynamic tribute to the African American community, and his life’s work,” said Ivan Holloway, Executive Director for Urban Impact. “It points to several different buildings throughout Birmingham… more importantly the Fourth Avenue Business District.”

The church also has recently received additional funding from Amazon to develop and install the museum inside the parsonage.

A ribbon-cutting ceremony for the finished renovations is set to take place in February, in honor of Black History Month.