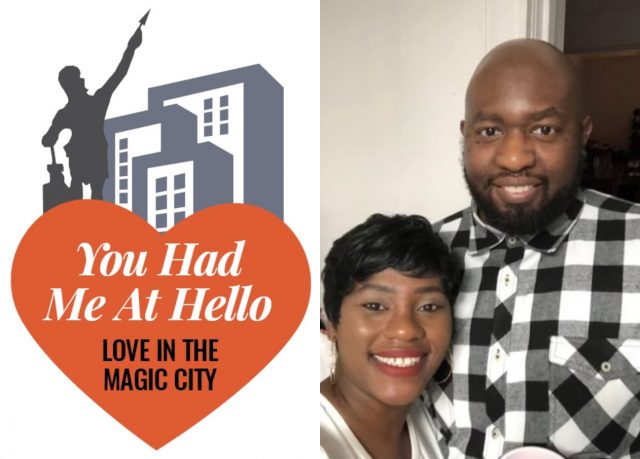 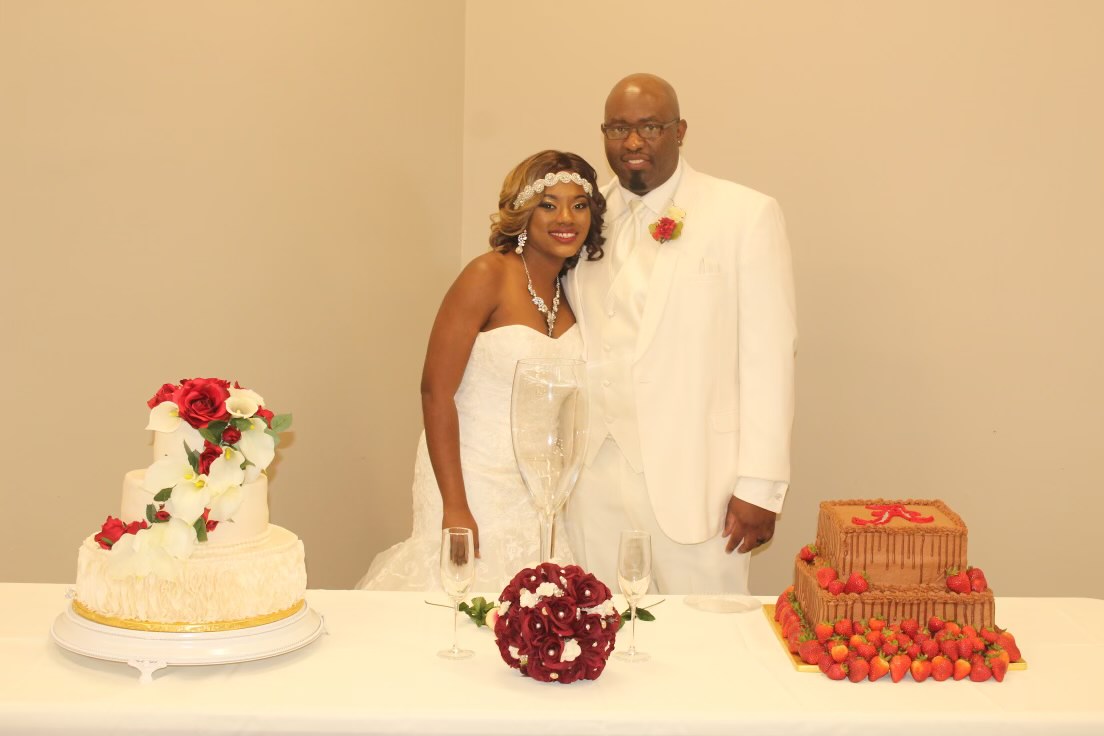 Jacques was manning the grill. “I was walking around speaking to everybody and when I got to Jacques, I said something along the lines of ‘you not gonna speak?’, and she took a good look at me and said ‘hey, James, long time no see!’ We hadn’t seen each other in quite some time… but I liked what I saw,” James said.

“I didn’t recognize him because he was bald,” Jacques laughed, “but I did recognize his voice. We were glad to see each other, we hugged, we chatted for a good little moment and then went on our way. I was cooking, so I had to go back to the grill,” she said.

Then in October James told a mutual friend of theirs to give Jacques his number and to give him a call.

“I was shocked when I found out that he liked me . . . I ended up calling him the next day and we talked for hours,” said Jacques.

“We laughed and talked and noticed we had a lot of similarities, and that chemistry was there,” Jacques said. “After we left [the restaurant], we went to the Plum Bar [downtown, Birmingham] and had drinks. The body language and the chemistry I was feeling at the time was more than ‘a great friend’, we were going to the next level,” she said.

“That was my first time actually getting to be with her one on one,” James said. “I liked the whole vibe of the environment, I liked the setting, the live music… The whole time I’m thinking in my mind . . . she seems like she knows what she wants out of life, she knows what she wants in a mate and I left that date with good intentions,” he said. “I knew this was going to go beyond a simple first date.”

The turn: November, 2014. James and Jacques decided to be exclusive. “I was getting a lot of positive energy, and we had a conversation about making it exclusive and just seeing how it would go,” Jacques said. “It was the charisma for me.”

“We were on the same page,” said James. “It’s almost like we were thinking alike at that point in time, like we fed off one another. Both of us were comfortable taking it to that next level, and neither one of us had anything to lose.”

“It was the opening day of college football season and we’re all Alabama fans, and my brother gave me the idea of how to propose to her… Artez told me I should do it when Alabama scores their first touchdown… “[At every touchdown] we always jump up [in a huddle/circle] and yell ‘Roll Tide’, and the plan was that everybody would huddle around me [to celebrate the touchdown] and when the huddle broke I would be in the middle down on one knee with the ring in my hand,” James recalled. “[Everything went according to plan] and when the circle broke I popped the question. She was stunned because she wasn’t expecting that, and obviously, she said ‘yes’.”

“He really got me, I was in shock because it happened so fast,” Jacques said. “And normally, I would stand up and do the huddle with them, but for some reason [I sat that one out], and when they came out of the huddle and I saw him on one knee, I threw my hand over my mouth. It was a beautiful moment, one of the best ones of my life.”

The wedding: At the Shields Conference Center at W.C. Patton Park in Birmingham, officiated by Rev. Demetrius Blackmon. Their colors were ivory, crimson red, and champagne.

Most memorable for the bride was running late to the wedding venue. “It had rained that day really bad and I thought I was going to be late getting there with my bridesmaids… But when I walked down the aisle (my brother, Jaffa, escorted me) I saw James had the biggest smile on his face ever,” Jacques said. “I wasn’t nervous, I didn’t have cold feet, I was just ready to marry my best friend, the love of my life.” Another special moment was James’s reaction to her surprise reception dress. ‘He loved it,” she said.

Most memorable for the groom was thinking the rain would jeopardize guest attendance. “I was the first person to the venue that day, and it was raining so bad that I thought ‘man, ain’t nobody gonna come . . . it’s raining too bad’. I thought that rain was going to ruin the day, but it didn’t. [My] dressing room was towards the front so I was able to see that people were showing up, and people were coming in giving me words of encouragement and wisdom,” James said. “When I walked out with my groomsmen and saw that all of these people showed up for me and my soon to be wife, I felt special.”

The newlyweds enjoyed a staycation at home. “Neither one of us had to go back to work for a week, so we had fun around the city,” Jacques said. “But in 2020, we took our real honeymoon and went to Las Vegas, Nevada and Charlotte, North Carolina,” said James.

Words of wisdom: “Keep God in the center of your life and marriage, that’s first and foremost,” Jacques said. “You have to date your spouse, enjoy each other’s company, and make time for one another. Never go to bed mad, you have to come to some sort of understanding so that you can get back on one accord.”

“Remain the person that your spouse fell in love with. However and whoever you were when you came into the relationship, stay that person because obviously you did something right,” James said. “You gotta talk about whatever issues you may be having, you gotta put it on the table because no matter how well you know the other person, no one can read the other person’s mind.”

Happily ever after: Jacques, 36, is a College Hills native and A.H. Parker High School grad. She attended Lawson State Community College where she earned an associate’s degree in computer science/business education, and Kaplan University [online] where she obtained a bachelor’s degree in information technology. Jacques works for the University of Alabama at Birmingham [UAB] Callahan Eye Hospital as a computer technician.

James, 36, is a West End native, West High School grad, and works for the City of Birmingham for the Public Works division as a driver-messenger.