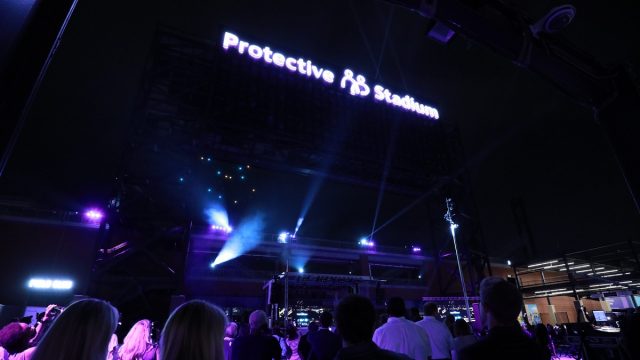 If the lighted wristbands attendees wore weren’t an indication, the synchronized drone show 400 feet in the sky made it clear that a major milestone was marked at Birmingham’s Protective Stadium Tuesday night.

“Big things can happen when we collaborate toward a shared vision. I believe Birmingham has a bright future ahead, and Protective is proud to be part of bringing this stadium to life for our community,” said Rich Bielen, Protective president and CEO. “At Protective, we’ve been putting people first for more than a century – that will never change. Together, we’ll keep pushing to find better ways to contribute to the well-being and quality of life in our local communities, and Protective Stadium will offer many more opportunities to live out our purpose of being protectors.”

The finale had 60 drones creating images in the sky that included the state of Alabama and Vulcan and spelled out “BHAM” and “MAGIC” before counting down the lighting of Protective Stadium’s new indigo sign.

“This is an exciting day for Birmingham and for the state of Alabama. Protective Stadium will have a tremendous impact on our state and in our communities,” Ivey said. “Most importantly, the public-private partnership forged throughout this process has shown us what’s possible when we come together to achieve a common goal.”

Attendees heard a poem from Trysten Manning, an eighth grader at Phillips Academy, who was the winner of the Protective Stadium poetry contest. The winning poem, “Still, My Steel City,” will go in the stadium’s time capsule.

“Birmingham’s greatest success stories are built on public-private partnerships, and Protective Stadium is the latest example of that,” Woodfin said. “The lighting of the stadium is a significant milestone in our progress and showcases that Birmingham can shine brighter when we work together. We look forward to welcoming visitors and fans to Protective Stadium as we host world-class events that will help move our city forward.”

Protective Stadium will be home to the UAB Blazer football team, beginning with a game against Liberty Oct. 2 at 6 p.m., which will air on CBS Sports Network. The stadium will host the World Games opening and closing ceremonies in July 2022.

“This has been an incredible team effort, and we are proud to call Protective Stadium home to UAB Blazer football,” said UAB President Ray Watts. “We look forward to welcoming our players, students and fans to this impressive facility in the heart of Birmingham.”

“The stadium has long been a part of the strategic vision for the BJCC and its board of directors,” Snider said. “When the authority took action following the return of the UAB football program and began to assemble the public-private support of the many partners in this project, it was clear the stadium would be an opportunity to showcase the momentum of the city of Birmingham.”

Darlena Battle, a corporate relations specialist at Alabama Power and vice president of the neighborhood association for the nearby Fountain Heights community, was among those attending the event. She is enthusiastic about Protective’s pledge to stay involved in efforts to support the surrounding neighborhoods. “They are listening to the concerns of the community,” Battles said. “We look forward to working them.”