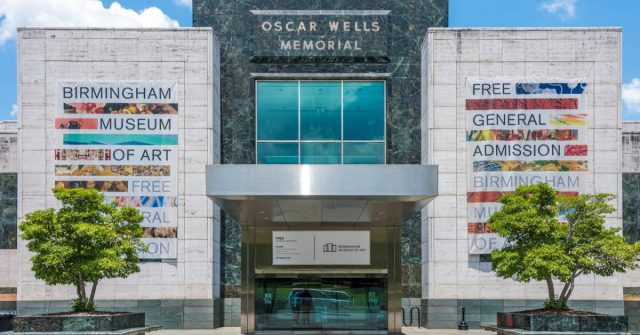 More than 1,000 years after Alabama was home to one of the largest and most important Native American cultures ever to exist, the Birmingham Museum of Art (BMA) is planning an exhibit with some of the artifacts.

“Lost Realms of the Mound Builders: Ancient Native Americans of the South and Midwest,” a free exhibit, will open at the BMA on October 9 and run through Feb. 6, 2022.

“The reason why I thought this would be interesting to bring the show to Alabama, is that one of the most important sites of the Mississippi Mound Builders, is right here in Alabama on the side of Moundville, which is near Tuscaloosa,” said Emily Hanna, Senior Curator of the Arts of Africa and the Americas at the BMA.  “The Mississippian Mound Builders were responsible for some of the first ever man-made monuments in North America, creating massive platform mounds constructed by hand.

“Moundville is an incredible town that has multiple massive platform mounds,” she added. “Moundville was connected to many other sites throughout the Midwest and the South. They were all connected by trade, so I thought for us in Alabama, it would be amazing to see this incredible collection of objects that takes us back to who was living in our state, and what they were thinking and making.”

The exhibition will explore the “fascinating archaeology and history of the Mississippian Mound Builders, their religious and ceremonial activities, farming and hunting practices, trade networks, and their highly-developed social, political and religious centers,” Hanna said.

“We wanted to make sure we highlighted were these magnificent objects . . . there are so many objects coming from everywhere and this a key point about the show,” Hanna said.

The exhibition also showcases contemporary Indigenous works of art that connect the art and artistry of the Mississippian Mound Builder peoples to their modern descendants.

“The other half of the show is contemporary art made by people who are descended from the Mound Builders, said Hanna. “There are some artworks like their detailed pottery and sculpture and sophisticated weapons… It’s not just portrayed as a culture from the dead past, it’s showing you that people are alive and well and that they have a connection to that past…they are making artwork and oftentimes they’re making artwork that connects to the past.”