Jefferson County District Attorney Danny Carr has been named the 2021 recipient for the Charles Colson Servant of Hope Award.

The annual award is given by Prison Fellowship to a person who has brought the “message of hope, redemption and restoration” into correctional environments. The group is the nation’s largest Christian nonprofit serving prisoners, former prisoners, and their families.

The award, Carr said, means that his office is doing work being felt “not only from a prosecutorial standpoint, but also from a humanitarian standpoint. There are people who deserve second chances, who are getting those second chances, people who fall into the category of non-violent offenders,” he said.

“It means that we are doing some things right, and it means that we have the courage to speak up and do things for individuals who would be so easy to forget.”

James Ackerman, President and CEO of Prison Fellowship, said Carr is an “incredible asset” for work being done to help those to deserve a second chance.

“We’re so happy to present this well-deserved award —named after the founder of Prison Fellowship—to Danny Carr for his incredible work in helping our returning citizens seek gainful employment in supporting their families and communities,” said Ackerman. “Not only has Danny held numerous hiring fairs in the past few years—employing more than 500 returning citizens—he’s also an active speaker at our Prison Fellowship Academy at the St. Clair Correctional Facility.”

The DA pointed out that his office operates in a “bifurcated way — meaning that we are still holding people accountable for violent offenses, yet we are looking at the ones who are forgotten, who deserve a second chance who have a chance to become productive members of society,” he said.

Carr pointed to individuals like Derrick Ervin who received a life-without-parole sentence in 2007 for drug dealing and in August 2019 had his sentence altered to include parole. He was released slightly more than a year later and today serves God and his community as a member of the Prison Fellowship. 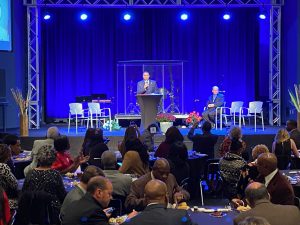 Carr also pointed to Ronald McKeithen who was released last year from prison after 37 years. At age 21, McKeithen was sentenced to life without parole under Alabama’s “three strikes” law. He was released from Donaldson’s Correctional Facility and is now running the front desk at a local car dealership.

“To see those individuals get second chances, to see them come out and be productive members of society, to start their own companies, to hire second chance offenders, to be active in their church and to rebuild their family life as well as a huge part of their community means a lot,” Carr said.

He added that those who have been through the system are “credible messengers” to deter others from “the pipeline to prison” which is why they speak at schools and in front of youth groups.

Jeremy Miller, Alabama Field Director for Prison Fellowship, said, “[Carr] has proven to be a leader that not only believes in the rule of law but also has compassion for those seeking to find a second chance after incarceration. Danny believes in change and redemption and seeks to find ways to positively impact those affected by crime and incarceration.”

The DA stressed that people are not just being let out of prison. “All of these individuals [being released] are vetted and they are not a threat to our community . . . at the same time know that anyone who commits violent crime we will hold accountable. This is not a free pass.”

Miss USA 2020, Aysa Branch, presented Carr with the Servant of Hope Award last week at banquet at The Church at Brook Hills. Branch is passionate about humanity and reform in the prison system after her father, who is retired military, was sent to prison when she was just 10 years old.

Prison Fellowship advocates for federal and state criminal justice reforms that transform those responsible for crime, validate victims, and encourage communities to play a role in creating a safe, redemptive, and just society.

To learn more about Prison Fellowship, visit www.prisonfellowship.org or call 800-206-9764.