When LaToya Jolly was laid off from a banking job in 2017, she got some great advice from her boss at the time.

He was right. Two years after that conversation, Jolly opened her mobile truck: Jolly Cakes and Treats.

“It was something that I took my time with,” she said. “I had a strategy in my head, and I just waited on the Lord to tell me when to take those next steps. Now we are here. It’s really about patience and trusting [the Lord] to fulfill what He has planned for you.”

It wasn’t easy, though. Shortly after losing her banking job, Jolly experienced a spontaneous coronary artery dissection (SCAD), an uncommon emergency condition that occurs when a tear forms in a blood vessel in the heart.

“I had two back-to-back heart attacks. I had [the first one] when I was at home, and then I had the other [one] when I was in the hospital,” she said. “I was under a lot of stress at that time. I had just gotten laid off, and I was trying to figure out my next steps. I was baking a lot of cakes for people, too, so I wasn’t getting the rest and peace I really needed at the time.” 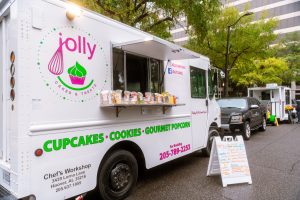 While recovering in the hospital, Jolly had an epiphany.

“I viewed the experience as God giving me a second chance,” she said. “I saw the experience as my time to take the leap and really use my gifts for baking”—something Jolly had done often when preparing cakes for co-workers, family, and friends.

“Before I was let go from my job, I would bake cakes for our meetings, holiday parties, … really anytime,” she said.

Being laid off was hard because Jolly had grown close to many of her co-workers during her 10 years with the company.

“I didn’t really see it coming, and I didn’t know what was next,” she said.

She traveled to different places across Birmingham—the Social Security building in downtown Birmingham, beauty salons, barber shops—selling her cakes and cookies from a cooler in her then Chevy Equinox. Eventually, she partnered with Corry Harris, owner of Corry’s Restaurant and food truck in Southwest Birmingham.

“I would travel with [Harris] often, partnering with him and preparing desserts for his food truck,” Jolly said. “The more we went out, the more I started to think, ‘OK, what if I had my own truck for my desserts?’”

Jolly, 49, graduated from Woodlawn High School in 1990 and went on to attend the University of Montevallo, where she earned a degree in retail merchandising. She also obtained an insurance license in 1994.

Jolly and her sister, Tiwana, run Jolly Cakes and Treats together—and the sisters said they can “satisfy anyone’s sweet tooth” with their various dessert offerings, including cupcakes in flavors like red velvet, strawberry, key lime, and German chocolate, as well as different types of cookies and flavored popcorn.

Jolly’s future plans include adding sweet potato pie to the menu and opening a brick-and-mortar location. 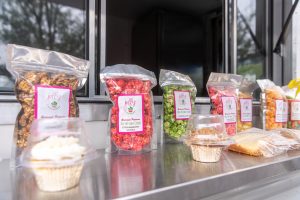 “I really enjoy baking. It puts me in my happy place,” she said. “Something about mixing different ingredients really satisfies me, … and seeing it [all] come together as a dessert in the end is my favorite part.”

“Red velvet is how I started baking,” she said. “It’s everyone’s favorite, and it honestly is really good. So, I decided, ‘Why not name after my city?’”

Jolly added that she wanted to do something for the city because the city has done so much for her.

“Birmingham people really show the most love. When I first opened my business, so many people were willing to support, and that took a lot off me because then I knew people were really ready to support,” she said. “It has just been such an awesome experience, and I thank everyone who has supported me along the way.”

To learn more about Jolly Cakes and Treats, visit www.facebook.com/JollyCakes.205 and www.instagram/jollycakesbhm.

If you would like to see your favorite food truck featured in The Birmingham Times, email bwright@birminghamtimes.com, and put “Food Truck” in the subject line.