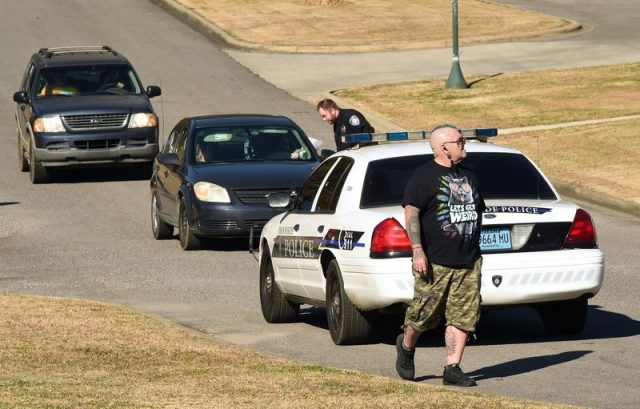 Brookside, a former mining community of about 1,250 near Birmingham, with a median household income less than $40,000, has no traffic lights and only a handful of two-lane roads, yet it raked in so much revenue from traffic fines and forfeitures in 2020, it amounted to almost half of its $1.2 million municipal budget.

The curious case of the financial income of the town, on the outskirts of Birmingham, exploded into a scandal following a local news report on AL.com last week. It resulted in Brookside Police Chief Mike Jones resigning Tuesday on the same day Alabama Lt. Gov. Will Ainsworth requested a state audit, and amid calls for state and federal investigations.

“This city is a ticking, ticking time bomb waiting to explode,” state Rep. Juandalynn Givan, who has called for other town officials to resign, told the NBC affiliate WVTM in Birmingham. “It’s the wild, Wild West, and they created their own wild, Wild West.”

As Brookside’s earnings draw further scrutiny, with Givan planning a town hall Tuesday to allow people who say they’ve been exploited by the police force to come forward, advocacy organizations are emphasizing that it is no outlier and highlights how across the country, traffic fines and related fees are being used to fill municipal coffers at the expense of people who are often financially struggling and from communities of color.

The issue gained prominence in the wake of the 2014 fatal police shooting of Michael Brown, a Black teenager, in Ferguson, Missouri, when a report by a St. Louis-area public defender group found that Black drivers in Ferguson were more likely to be stopped by police and local courts were abusing their power by charging high fines and fees for nonviolent offenses, sometimes leading to arrests when they went unpaid.

“Ferguson made us realize it wasn’t just Ferguson,” said Priya Sarathy Jones, the national campaign director at the Fines and Fees Justice Center, which advocates for fees to be eliminated in the justice system and fines to be equitably enforced. “Brookside is a continuation of that story almost 10 years later. It’s a story that is really egregious and heinous for a variety of reasons.”

According to AL.com’s investigation, Jones, who was hired in 2018, built a police department of 10 or more full-time and part-time officers to patrol Brookside’s 6 miles of roads and 1 ½ mile jurisdiction along Interstate 22, a corridor between Birmingham and Memphis, Tennessee. The news outlet found that Jones positioned officers to stop motorists so aggressively that income from traffic fines and forfeitures rose 640 percent from 2018 to 2020, from about $82,000 to more than $610,000. The town also expanded its towing operations, going from 50 vehicles in 2018 to 789 in 2020.

Officers in Brookside have been accused in lawsuits of manufacturing reasons for traffic stops, overcharging and “making up laws,” AL.com reported. They’ve also been accused of using racist language in a community that is majority white, but also has a Black population of nearly 25 percent and a small but growing Latino population. The town’s median household income is less than $40,000, according to demographic data.

Jones could not be reached for comment Friday. In a statement, Brookside City Attorney Mark Parnell said that as the local prosecutor, he has “strived to ensure” only police charges with merit moved forward or were otherwise dismissed.

“Brookside will continue to cooperate with all appropriate authorities to ensure that a full investigation of these issues are completed,” he said.

The city is facing at least five federal lawsuits related to its policing.

Bill Dawson, a lawyer in Birmingham, said he’s had about two dozen people contact him with allegations, but for years, many have been too reluctant to complain. He said people have stories about their cars getting towed and being left on the side of the road, then being charged by both the town and the impound company to get their vehicles back, on top of daily storage fees.

\He said he also represented a woman who was stopped in 2019 for driving in the left lane of I-22, which was not technically a crime, and accused police of using a “false left-lane violation” to ensnare motorists.

The problem for those alleging misconduct is that officers may be immune from lawsuits if their actions are found to be a part of their official duties, Dawson said.

The office of state Attorney General Steve Marshall, a Republican, declined to comment Friday about the traffic stops in Brookside.

Ainsworth, also a Republican, told AL.com that his office would look at legislative options to determine how to prevent towns from taking advantage of drivers passing through on highways, a problem lawmakers acknowledged is happening across the state.

But it’s also prevalent across the country. A 2019 report in Governing magazine found that fines and forfeitures account for more than 10 percent of general fund revenues for nearly 600 jurisdictions throughout the country, and in jurisdictions where fines accounted for more than 20 percent, the local median household income was less than $40,000.

Sarathy Jones said the issues in Brookside should be a warning for towns and small cities to examine their revenue sources and ensure their local governments aren’t turning to law enforcement as moneymaking arms.

In addition, she said, counting on fines and fees collected from people in lower income and marginalized communities only serves to punish them further.

“Even if you legitimately stop someone because they need a light on their car fixed, if you give them a ticket, how does that meet the goal that a person’s car be made safer?” she said. “You’re taking the money for them to potentially get that light fixed by making them pay a fine.”

“What if $150 is the cost of choosing between feeding my child, getting their medicine or paying this ticket?” she added. “Their whole financial existence starts to spiral, and it was all over a light on their car not working.”