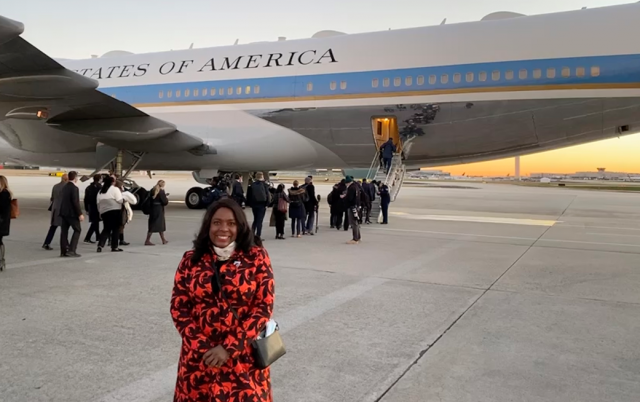 Alabama Rep. Terri Sewell, one of the leading advocates for the John R. Lewis Voting Rights Advancement Act, was in Atlanta on Tuesday and fully supported President Joe Biden’s forceful speech about the need to protect the sacred right to vote.

Biden challenged senators to “stand against voter suppression” by changing Senate rules to pass voting rights legislation that Republicans are blocking from debate and votes.

Biden told a crowd in Atlanta gathered on the grounds of Morehouse College and Clark Atlanta University that he’d been having quiet conversations with senators for months over the two bills — a lack of progress that has brought him criticism from activists in his own party.

“I’m tired of being quiet!” he shouted to cheers from the crowd.

The John Lewis Voting Rights Bill would restore the full protections of the Voting Rights Act of 1965 after it was gutted by the Supreme Court in 2013.

“Our nation is at an inflection point,” Sewell said after Biden’s speech. “Soon, voting rights legislation will go to the Senate floor and each Senator will have the chance to make their stance known to the American people . . . history will judge each Senator for what they do in this critical moment. Will they choose to uphold the legacy of the Foot Soldiers like John Lewis who shed blood on a bridge in my hometown for the right of all Americans to vote? Or will they choose to enable the erosion of our democracy at the hands of those who have always sought to silence us?”

Biden’s speech came less than a week before the nation prepares to observe the birthday of Dr. Martin Luther King Jr. on January 17.

Quoting Dr. King, Sewell said, “As we prepare to observe the birthday of the Reverend Dr. Martin Luther King Jr., let us remember that justice delayed is justice denied. The time for talk is over. The time to act is now.”

In his remarks, Biden invoked the civil rights battles of the 1960s. He likened the wrongs of the past to modern-day efforts to subvert elections through the Capitol riot a year ago and a series of GOP-backed laws passed after former President Donald Trump lost in 2020 and then falsely claimed widespread voter fraud. Biden chastised Republicans for falling in line behind Trump’s election lies.

“Today, we call on Congress to get done what history will judge,” Biden said. “Pass the freedom to vote act.”

Biden’s speech was blunt and explicit, referring to new efforts to limit voting access as “Jim Crow 2.0.” For the first time, he directly advocated eliminating the Senate’s vote-blocking device called the filibuster in order to debate and vote on election and voting rights legislation. Though his focus brings more national attention to the debate ahead, it’s not clear what impact his newfound fire will have.

There also aren’t enough Democratic votes to change the Senate rule. West Virginia Sen. Joe Manchin threw more cold water on the idea Tuesday, saying he believes any changes should be made with substantial Republican buy-in. And there aren’t any Republican senators willing to sign on.

“Not a single Republican has displayed the courage to stand up to a defeated president to protect Americans’ right to vote,” Biden said. “Not one. Not one.”

Congressional Democrats have written voting legislation that would usher in the biggest overhaul of U.S. elections in a generation by striking down hurdles to voting enacted in the name of election security. The legislation also would reduce the influence of big money in politics and limit partisan influence over the drawing of congressional districts.

The package would create national election standards that would trump state-level GOP laws. It would also restore the ability of the Justice Department to police election laws in states with a history of discrimination.

Republicans say the changes are not aimed at fairness but at giving Democrats an advantage in elections.

And it is coming from “a sitting president of the United States who pledged to lower the temperature and unite America,” McConnell said.

Even if Democrats clear the obstacles to passing the legislation, it could be too late to counter voting restrictions passed in 19 states following Trump’s 2020 loss and his lies — embraced by many in the GOP — that the election was stolen through voter fraud.

Voting rights advocates in Georgia and nationwide are increasingly anxious about what may happen in 2022 and beyond. They view the changes in many states as a subtler form of ballot restrictions like literacy tests and poll taxes once used to disenfranchise Black voters, a key Democratic constituency.

“This matters to all of us,” Biden insisted. “The goal of the former president and his allies is to disenfranchise anyone who votes against him, simple as that.”

The president spent decades in the Senate, and he spoke with regret of how much it’s changed for the worse, calling it “a shell of its former self.” He spoke of an era not long ago when an issue like voting rights would never have been so rancorously partisan.

He recalled working with segregationist lawmakers in the Senate to get legislation passed and for it then to be signed into law by Republican presidents. But now, the filibuster has been used frequently to block even the debating of some legislation.

“How do you want to be remembered?” he asked his former congressional colleagues.

Senate Majority Leader Chuck Schumer, D-N.Y., has set next Monday’s Martin Luther King Jr. Day as a deadline to either pass voting legislation or consider revising the rules. Biden told his audience, “The next few days, when these bills come to a vote, will mark a turning point in this nation’s history.”

“Will we choose democracy over autocracy, light overshadow, justice over injustice? I know where I stand. I will not yield. I will not flinch,” he declared. “I will defend the right to vote, our democracy, against all enemies foreign, yes and domestic. The question is where will the institution of the United States Senate stand?”

Biden also visited Atlanta’s historic Ebenezer Baptist Church, where the late Rev. Martin Luther King Jr. once held forth from the pulpit. He stood quietly as Martin Luther King III placed a wreath outside at the crypt of King and his wife, Coretta Scott King.

Some voting rights advocates boycotted Biden’s speech out of frustration over Washington’s inaction. Georgia Democratic gubernatorial candidate Stacey Abrams, known for her untiring voting rights work, said she skipped the event because of a scheduling conflict, which she did not explain further.

King said in a statement that he was happy to host Biden, but that he also supported those who chose to skip the speech.

“We’ve seen what’s possible when President Biden uses the full weight of his office to deliver for bridges,” he said, referencing Biden’s successful push for a $1 trillion infrastructure spending deal. “And now we need to see him do the same for voting rights.”

Republicans who have fallen in line behind Trump’s election misinformation are separately promoting efforts to influence future elections by installing sympathetic leaders in local election posts and by backing for elective office some of those who participated in the riot at the U.S. Capitol.

Vice President Kamala Harris spoke before Biden on Tuesday, warning that the barrage of new state laws means there is “a danger of becoming accustomed to these laws, a danger of adjusting to these laws as though they are normal.”

“There is nothing normal about a law that makes it illegal to pass out water or food to people standing in long voting lines,” she said, to cheers.

Georgia is at the center of it all, one of the key battleground states in the 2020 elections. After the votes were counted and recounted, Trump told the top state election official he wanted the official to “find” enough votes to overturn his loss. The state’s votes nonetheless went to Biden, and both of its Senate seats went to Democrats as well.

Last year, the state’s Republican governor signed a sweeping rewrite of election rules that, among other things, gives the State Election Board new powers to intervene in county election offices and to remove and replace local election officials. That has led to concerns that the Republican-controlled state board could exert more influence over the administration of elections, including the certification of county results.