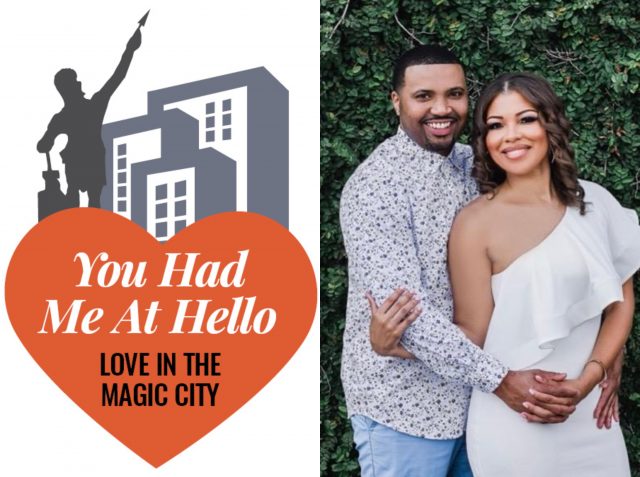 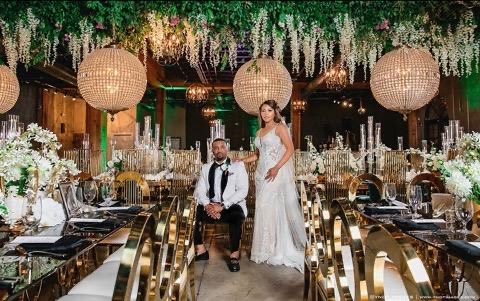 Met: December 2015 at the bar inside Aloft Hotel in Homewood, where Courtney and his best friend, Antjuan Spive, were part-time bartenders. Antjuan’s wife, Amanda, who is Raven’s sorority sister [Delta Sigma Theta], longed to introduce them. Courtney was working one evening when Raven was at the bar . . . “from there Raven and I were able to connect, we were having great conversation, and I asked her what she was doing that weekend, and we were both going to the SEC Championship game in Atlanta, and we connected at the game,” he said.  After the game, we took a taxi and went and hung out at a cigar bar and we just really had great chemistry,” Raven said.

First date: The following weekend at Brio’s at Brookwood. They met for Happy Hour to have drinks. “We’re very social people, so we sat at the bar and had drinks, but this time it was another level [of intimacy]. It was like, last weekend was fun, but this time it’s just me and you. The chemistry was just as strong,” Courtney said. Raven agreed, “it just wasn’t forced, it was natural,” she said.

During the following months, Courtney and Raven built a friendship, and in May of 2016, Courtney moved to Atlanta, GA. for a new job and they remained friends. That September, Courtney and Raven met again at Antjuan and Amanda’s wedding and the chemistry was still so intense it re-sparked the flame.

The turn: “November 2016 when we became more intentional with our time together,” Courtney said. That included traveling back and forth to see one another from Birmingham and Atlanta. In 2017, Courtney’s grandmother passed away and he decided to spend his first holiday without her trying something new. He joined Raven and her family on their annual Thanksgiving trip to Destin, Florida. “…that was his first time meeting my parents, and they immediately fell in love with him,” Raven said.

“Thanksgiving morning, I woke up early and went out to the beach and enjoyed a cigar.  I literally spoke out loud to my grandmother and to God, and asked, ‘is this where you want me to be at this point in time?’ and at that very moment a sign was given to me. The sun was piercing and literally blinded me after I spoke that out loud and I feel as if that was God and my grandmother giving me confirmation that I was exactly where I needed to be and that it was time to go ahead and grow my own family,” Courtney said.

The proposal: November 2018, on the beach in Destin, Florida on Raven’s family’s annual Thanksgiving trip the following year. Courtney’s family also came along to witness the proposal.

“We were headed out to the beach to take her mom’s all-white beach photo, [which was a] tradition…and Raven and I were ready [before everyone else] so I said let’s just go on out to the beach, just you and I, we can have a moment before they come. [We got to the water and] I handed her a letter . . . to throw her off so that she wouldn’t think that I was about to propose,” Courtney said.

“I read it and it stated the conversation that he had on the beach the previous year with God and his grandmother and how that was confirmation for him. “We’re looking at the ocean while I read all this, and when I turn around, I see my parents, my sister and my cousin Kim, and his family walking towards us, and that was a total surprise, so I’m like what’s going on, and then he dropped down to one knee.”

“In the exact spot that I had that moment with God and my grandmother is where I got down on one knee, and I stated out loud, “Raven Diana Bradley, in front of the most important people in our lives, I ask you, will you marry me?” Courtney said.

“I was like oh my goodness, is this really happening! Of course, my response was ‘yes’. I was in shock… “The second question he asked me was can we get married Oct. 5, 2019, because that was Alabama’s bye week?” she laughed.

The wedding: In Hoover at Park Crest Event Facility, officiated by Raven’s Pastor, Tony Hereford of Living Word and Praise Sanctuary in Tupelo, MS. Their colors were, black and white with a hint of greenery.

Most memorable for the bride was “when Courtney and I walked downstairs for the reveal of the reception area after saying our ‘I do’s’. Courtney was very involved in the planning, and we really worked together to see our vision come to life, and that made me realize if we can do this, we can accomplish anything together. And it was a sigh of relief like now it’s time to party,” Raven said.

Most memorable for the groom was “the first look with my mom. We did an official first look and what made it memorable for me is that I’m her only son and it’s more than a cliche, ‘your mom is your first love’. And to share that moment with her before I embarked on the biggest responsibility of my life was meaningful,” Cortney said. “She stated to me, ‘son, you are more than prepared to be a great husband and father, and I’m looking forward to gaining Raven as a daughter.’”

The couple honeymooned in San Juan, Puerto Rico. “Exploring the downtown area, one night we ventured off by ourselves, bar hopped, and experienced the culture,” Raven said.

Words of wisdom: “Being intentional about spending time together, communicating, even if it’s something small. And, be intentional about keeping the love alive. Marriage isn’t the finish line, you still have to put in work every day,” Raven said.

“Continuous effective communication can proactively prevent a lot. Throughout the marriage, very quickly, things can change, people can change, so being able to communicate is essential,” Courtney said. “A lot of people shun on the word fighting or disagreeing, but we believe if you fight, make sure you fight fair.”

Happily ever after: Raven, 30, is a Tupelo Mississippi native, and Tupelo High School grad. She attended the University of Alabama, where she earned a bachelor of arts degree in public relations, with a minor in computer science. Raven is a Delta Sigma Theta and works as a medical sales rep covering the state of Alabama.

Courtney, 34, is an East Lake native, Ramsay High School grad, and attended the University of Alabama, where he earned a bachelor of science degree in finance. He is a founding member of Cigar Men of Distinction, an organization that’s centered around community service, youth outreach, and brotherhood, and serves as a board member and president of the Birmingham chapter. Courtney is a commercial relationship manager at Regions Bank in downtown Birmingham.