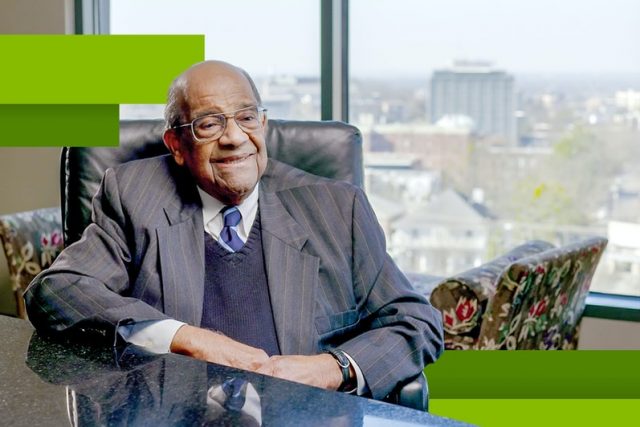 J. Mason Davis Jr. didn’t have to ask to join civic groups around Birmingham, Alabama. That’s because they usually asked him first.

“And when I would go into that group, I would do my very best to be the most outstanding person in that group,” he said.

Davis’ dedication to his community and commitment to excellence were honored at Regions Bank’s History in Motion celebration on Feb. 28.

The event was a grand finale for Regions’ commemoration of Black History Month, and Davis, with his tremendous professional and civic accomplishments, represents the leadership qualities the History in Motion program intends to acknowledge and celebrate.

A Birmingham native, Davis attended Talladega College and the State University of New York at Buffalo School of Law before returning to his hometown to begin his own law practice in 1959, initially specializing in civil rights cases.

He was involved in some of the most significant controversies in the ongoing struggle, including serving as attorney for a number of students who participated in the widely publicized Huntsville, Alabama, lunch counter sit-ins of 1961 and 1962.

With that case, and a number of others, Davis played a key role in the desegregation of Alabama.

Davis has earned many professional accolades, but he’s most proud and passionate about being a leader in support of health and human services charities and helping to create opportunities for minorities.

In 2019, the United Way of Central Alabama announced the launch of the J. Mason Davis Leadership Society to bring together African Americans who strive to positively impact the community through a shared affinity for philanthropy, volunteerism and advocacy.

In his History In Motion acceptance remarks, he recalled agreeing to attach his name only if the organization in turn made a commitment to “go into underprivileged neighborhoods and teach children to read and write at age 3. If we wait until kindergarten or first grade, they’re already behind the other students.”

That emphasis on education has been passed down in his family for generations, and Davis credits education for his life’s successes.

See more of his compelling life story in this video from Regions.