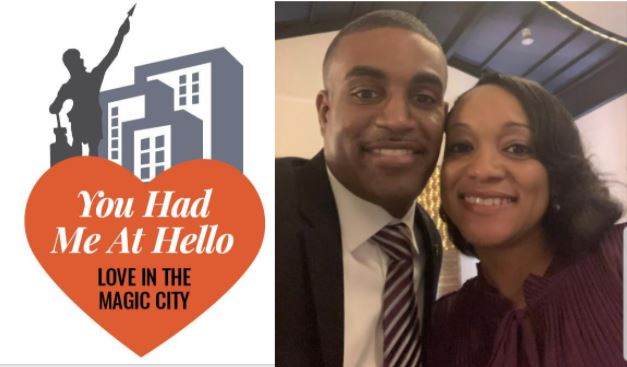 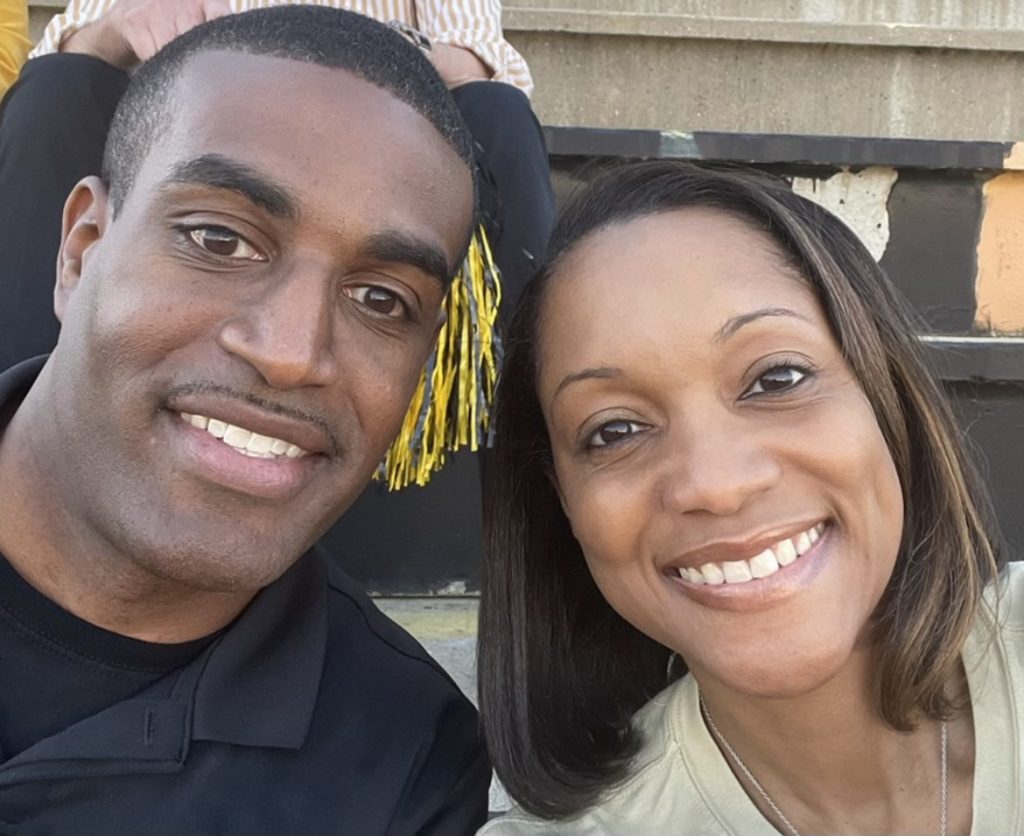 Met: During adolescence in the late 1980’s through their moms who worked together at South Central Bell [Bell South], who originally wanted Aydrian and Cortice’s younger sister, Shaundrece, to be playmates.

“They thought that we’d be good company for one another since we were both girls and around the same age, and that we’d have fun doing sleepovers together during the summer. Little did I know she had a cute older brother… after the first time Cortice saw me, he started requesting to come over to our house to hang out with my older brother, Walter, but he was actually coming to see me too,” Aydrian laughed.

After high school, Cortice [West End High School grad] left for the US Army and lived at Fort Bragg in North Carolina, and Aydrian [McAdory High School grad] moved to Jacksonville to attend college at Jacksonville State University. During visits home, the old friends would hang out whenever they were both in town at the same time.

“I had always liked Aydrian and I knew I could always call and talk to her because we were like ‘friends-friends’, and the more I saw her when I came home the more I liked her and wanted to [date her],” Cortice said.

“I was still in college, home for the holidays and he was home on leave, and he took me to this Japanese restaurant…and after dinner he took me to the Galleria mall and into a jewelry store and was trying to act like a big spender because he was in the military getting his little paycheck and told me to pick out whatever I want. “I said, no, that’s ok, I ain’t picking nothing because we ain’t doing nothing,” Aydrian said.

“I was just gonna go into debt trying to get her,” Cortice said. “I had been burning up that [credit card], so I was hoping [whatever she picked] was going to be cheap,” he laughed. Cortice was grateful Aydrian passed on the offer.

The turn: Summer 1997. “I went to Reserve Officers’ Training Corps [ROTC] Camp that summer at Fort. Campbell in Kentucky… We dated other people while I was in college and he was in the military. “And since he was in the military, I called on him to give me some insight and information because I was considering going into the Army and he was trying to talk me out of it… He came down to JSU [Jacksonville State University] when I was getting ready to go off to camp to see me, and when I got back from camp that’s when we started dating seriously. He would travel frequently to JSU to see me,” Aydrian said.

“I knew I really liked Aydrian and had been talking to my mom about her. “I would always stop by JSU first when I came home on my way to Birmingham. I knew I loved her and wanted to be with her. My plan was to have kids and I didn’t want them traveling around in the military having to live that life, so I ended up getting out and coming back home and starting over.”

The proposal: August 1997, in Cortice’s red Camaro in front of Aydrian’s parents home in Forestdale.

“I had been working with my mom trying to find a ring for Aydrian and that had me running late to pick her up for dinner… After dinner, we pulled back up in front of [Aydrian’s] parents house, and I didn’t do it traditionally, I didn’t ask her father or mother for their blessing, I wanted to be off the cuff,” Cortice said. “And when  I took out the ring she had this strange look on her face, but [I proceeded] and used the line Martin used on Gina when he proposed [in the 90s’ sitcom ‘Martin’] and said ‘I don’t know where I’m going to be in this life, but I don’t want to be there without you’. And I noticed she still had that look on her face, and that made me nervous, so . . . I [switched my tone and] said ‘I’m not gonna be asking you about this over and over again, will you marry me?’”

Cortice did not get a ‘yes’ right away.

“He had previously been talking to me about wedding stuff, rings, and potential proposals, and I was going into my senior year in college, and had said that I would want to get married one day, but sometime after college,” Aydrian said. “So that’s why when he pulled the ring out, I was looking at it strange because I said to myself ‘I thought I told him that I wanted to wait until after I got out of college’. I thought about it for a moment and I said I really do love him, he’s handsome, he treats me respectfully, he’s good to me, and he always makes me feel safe and secure. What else could I ask for in a man? So, I said ‘yes’.

The wedding: In Bessemer at New Bethlehem Baptist Church, officiated by Reverend William H. Walker. Their colors were peach, cream and silver.

Most memorable for the bride was getting married on a rainy day and her parents being stuck on the interstate.  “We had a certain amount of time that the church was booked for and the start time was delayed because I wouldn’t start the wedding without my parents being there,” Aydrian said. “And the wedding planner kept coming back into the bridal room trying to get me to get the wedding started . . . “but how was I supposed to walk down the aisle without my daddy?”

Most memorable for the groom was being unable to check into a hotel room that he had booked two weeks prior to the wedding.

“My friend, Willie Earl Hall and I were trying to check into the room [the morning of] the wedding and when I got there they [the hotel staff] said they didn’t have a room slotted for me and that everything was booked,” Cortice said. “I went back and forth with them until they made something happen because I had a receipt to show for it, and told them this was where I was bringing my bride that night. They sent us to another hotel, which was bigger and nicer…

The couple honeymooned at the Tutwiler Hotel in downtown Birmingham for the weekend.

Words of wisdom: “Keeping Jesus Christ and faith in God in your life has got to be the basis of any relationship because Jesus is what’s going to sustain you through those tough times because it’s not always going to be rosey. We’re not perfect, we’re flawed, but at the end of the day your love and faith in Jesus Christ should be able to bring you back to the center of your relationship.”

“We hash things out, where you learn different things about the other person, and we come out even better because that’s when we expose the things that bothers [one another and] we can fix what needs fixing.  It’s what we have tried to do for 23 years, we’re a true partnership,” Cortice said.

Happily ever after: The Miles’s have three sons: Cortice II, 23, Christian, 16, Cayden, 13, and nephew Christopher 9, who they’re raising.

Aydrian, 44, is a McCalla native, and McAdory High School grad. She attended Jacksonville State University [Jacksonville, Ala.] where she earned a bachelor’s degree in biology, and the University of Alabama at Birmingham [UAB] where she obtained a master’s degree in clinical laboratory science. Aydrian works as a clinical laboratory scientist and infection preventionist at UAB Student Clinic.

Cortice, 46, is a West End native, and West End High School grad. He attended the University of Alabama at Birmingham [UAB] where he earned a bachelor’s degree in criminal justice, and master’s degree in public administration. Cortice is a lieutenant in the Bessemer Police Department.