Marc Raby remembers how his love for theater began: he was 8 years old, and his aunt took him to the Alabama Theater to see a production by gospel playwright Michael Matthews.

“There was a moment in one of those shows that I remember so vividly. They wheel this coffin onstage, a purple coffin. The girl on stage is wailing and crying,” Raby said. “… It was such a moment that you could see that the audience was moved. People were hugging each other. I remember walking into the lobby after the show was over and hearing a girl keep telling her mother, ‘I’m sorry. I’m going to do better.’ I guess she had not been the best daughter at home, and she was hugging her mama’s neck.”

Raby was so touched that he remembered saying, “I want to do that: … inspire, affect change, and motivate people through theater.”

And the 32-year-old Birmingham native has done just that since he was 18 years old—entertained and inspired audiences through stories of laughter, love, healing, and forgiveness.

Is love really on the edge?

Raby is founder of A Marc Raby Artistic Entity (AMRAE) and artistic director of the Urban Soul Theater Series, which will present three productions at the Forum Theater through March 2018. In his plays, he likes to show the little nuances, glitches, lacks of communication, “the little misunderstandings that can be amplified into big drama. It makes for good stage,” said Raby, who often applies a fresh perspective to familiar stories.

“They’re like Sunday school lessons: we’ve heard it all before, but every now and then there is a man or woman of God who can serve it up to you in a way that you’ve never heard before, and it gives you a new outlook and perspective to be a better you. That’s always my hope,” he said. “Hopefully, you can walk away with something that can inspire you to be better.”

Though Raby’s shows may not be classified as “gospel theater,” the message can be found.

“We get an opportunity to have a platform that enables us to educate, enlighten, inspire, and sometimes even scold through what we do with theater in a way that sometimes the average pulpit can’t,” he said. “We can tell stories that are relative to what’s going on.”

Before becoming a playwright, Raby started in school competitions, including the Poetry Reading Festival.

“I won that a lot,” he laughed. “That’s one of my goals: to launch and oratorical competition.” 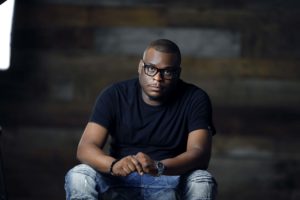 Raby, who attended Woodlawn High School before being home-schooled, has appeared in the theatrical spin-off of George W. Stewart’s popular book “The Black Male, Heads or Tales” entitled “Lord, All Men Can’t Be Dogs,” which was released in 2011 as a film starring Vivica A. Fox and Johnny Gill; he also had a role in T.J. Hemphill’s “Perilous Times.” His other stage credits include Duke Ellington’s “Sophisticated Ladies” and the controversial play “This is Real!”

When it comes to black theater, Raby said he realizes that “what we’re putting on stage isn’t Hamilton.”

“It may not even be as profound or prolific as ‘A Raisin in the Sun,’ ‘For Colored Girls,’ or ‘The Color Purple,’ … all shows that have become popular and acceptable as it relates to black theater in the mainstream arena,” he said. “My goal is to tell stories of our culture.”

Some of Raby’s inspirations include award-winning African-American authors and playwrights Pearl Cleage and Ossie Davis, who “write poignant pieces that speak of various eras in black culture but remain relevant today.”

Raby would like to get more millennials and younger people to the theater.

“I see it as a beautiful opportunity,” he said. “I have the opportunity to introduce the culture of what I do … [and] wrap that in contemporary music and jokes.”

In addition to writing plays, Raby also writes books. He authored a novella, “Love and Insecurity,” which is available on Amazon.

“When my mother passed away, I wrote a self-help book—‘Even Me: Maintaining Faith in Uncertain Times’—literally because it helped me,” he said. “And I’ve written a children’s book, ‘No Josh, No!’ that deals with the vivid imagination of a kid.”

Though Raby is quite busy with his various endeavors, he still finds time for his family: “My sister passed away in July, and I’ve been afforded the opportunity to raise my nieces,” he said.

Tickets for “Love on the Edge” and the entire Urban Soul Theater Series are available on the BJCC website via Eventbrite or online at www.urbantheater205.com; prices range from $19 to $45. For additional information, send an email to urbansoultheaterseries@gmail.com.