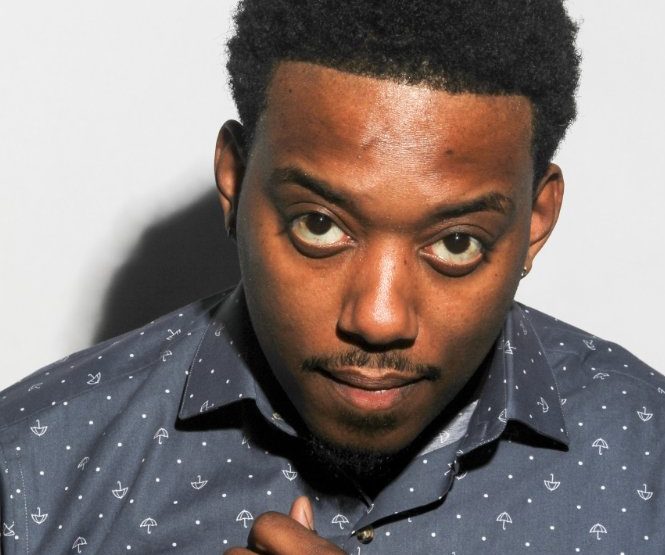 Comedian Chris “CP” Powell’s will make his first visit to Birmingham this weekend and he can’t wait for the South’s famous barbeque.

“When I think [of] Alabama, I feel like I should be getting some good barbeque,” he said. “I watch a lot of Andrew Zimmern on the Travel Channel. I want to say I watched the Alabama episode. He was eating some turtles…and I was like, ‘I don’t want to do that,’ but I definitely want some ribs. I’m a city boy; I’m from Detroit, so I’m definitely excited to test the South a little a bit.”

Powell will headline at the StarDome Comedy Club in Hoover Friday through Sunday, and his style of comedy is something he cultivated throughout his life.

“I’ve had very cool parents. They were 19 and 20 when they had me, so we kind of grew up and learned together. They never censored stuff from me. So, I was able to watch Richard Pryor and Eddie Murphy and Redd Foxx, [and] all of the comedians that began to get popular as I was getting older, I was able to watch them as well without any interference,” he said. “Nobody told me that what they were saying was wrong, and nobody was also really explaining it to me. …It was just this guy’s take on whatever he wants to talk about. It was just very fascinating to me and I think…that groomed me into being able to take my own chances.”

Powell’s career has progressed from his hometown of Detroit to Hollywood, where he has starred in the first season of Fox’s “Empire” and now stars as Ned on Comedy Central’s “Detroiters,” which he also co-writes with writing partner and former “King of the Hill” writer Chip Hall.

Powell didn’t start in entertainment; he started in advertising.

“I was a copywriter, writing commercials for Wal-Mart, Chrysler, Jeep, American Airlines…MGM Casino…I had a lot of accounts I was writing for. I did it for two and a half years,” he said. “…In advertising, there aren’t any credits that roll with the commercial. I’m behind the scenes, and that’s fine for stability, but sometimes you’ve got to look at it like, what if? I’m sitting there, writing for commercials and I’m casting commercials, I’m hiring directors, and at some point, I learned the process so well from the other side[.]”

Powell said he was comfortable failing at first with comedy because he knew he would be able to “get back to whatever life I had and that I had a career.”

For four months, he “burned the candle at both ends,” he said.

“I’d be at my office doing the commercials, then I would go out and shoot them. Wherever we were at on location, I would find a comedy club[.]”

Powell said working double-duty helped him “grow faster” at his career in entertainment, to the point where he felt he could pursue his dream full time. But the work wasn’t over.

“You’ve got medical benefits, I had a car, I had a condo. It [puts you in a situation] where it’s like, essentially as a new comedian, you’re going to be broke period starting off,” he said when describing the leap from the corporate world to comedy. “…But it got me excited because I knew if I could endure it, then I could get something out of it.”

Powell said trust from his parents, as well as in himself, helped with his journey in the entertainment industry.

“A lot of my friends [say their parents] want [them] to do [a certain] job…I didn’t really have that,” he said. “…They trusted me and that was important to me.”

Powell starred in the first season of Fox’s “Empire” and now stars as Ned on Comedy Central’s “Detroiters. Through both shows, Powell has been able to learn more about what he wants from his career and what he doesn’t want.

“When I did Empire…I was in it when they were setting records. We were the number one show on television and the [highest rated] number one show on Fox in, like, a decade. [We were] putting up crazy numbers. It was cool. I think my problem with ‘Empire’ is that I wasn’t allowed to be the comic relief. I had to be the straight man,” he said. “…That was very frustrating for me. …I felt like I wasn’t adding everything I could add. I was kind of excited for that to be over, honestly.”

“They asked me to come back for the second season. I went back for one day and they cancelled my scene.” Powell said he knew then it was time to move on.

It worked out because “Detroiters” came along, he said.

“My role] expanded in season two, I’m one of the leading characters now. It was kind of a gamble I took, but once again [it was from] trusting myself.”

Powell, with Hall, has sold seven television shows to networks, including animated comedy ‘Brightmoor’ with Sean “Diddy” Combs attached as an executive producer, and ‘The D,’ a half-hour comedy which features a puppet as Powell’s best friend.

Along with television work, he also hosts MTV2’s “World Star TV,” which is preparing for its second season, touring the country to perform stand-up comedy and is working on being a part of the next Def Comedy Jam special, having been a part of 2016’s special on HBO.

To reach such starts with a first step, Powell said.

“Everybody’s using the stairs. When you see people on step 10—they’ve finally started getting money and they’re finally starting to do different things—people get discouraged. You have to take it one step [at a time],” he said. “Every step has a reward. It’s like a video game; we’re beating these levels. Every level is going to offer you a new skill set. There is a light at the end of the tunnel. When you first enter the tunnel, it’s very hard to see that light. But there is a light.”