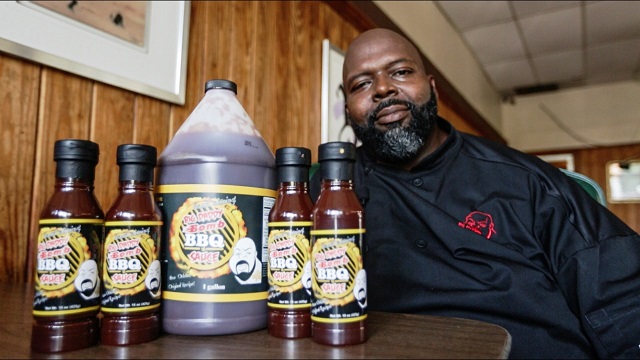 His New Orleans roots gave Dwayne Thompson a keen sense for food, but it was his cooking in Alabama that birthed his business.

The Katrina refugee settled in Alabaster, where he catered for friends’ events to earn some extra money. His homemade barbecue sauce started getting noticed and person after person told him he should bottle the stuff.

So, in 2015, Thompson formed Bid Daddy Sauces LLC and went through the licensing and other requirements to bring his sauce to market. His signature sauce is Big Daddy Bomb BBQ Sauce.

“It is a definite across-the-board sauce that’s just not stuck at just waiting until you put out your grill,” Thompson said.

His family puts it one everything from chicken fingers to fish to pasta.

“I believe that this particular sauce is great,” he said. “I believe, just like Colonel Sanders believed, that I just happened to blend the right herbs and spices at the right blend to make it perfectly robust and very tasty.”

Others seem to agree. Sales of the sauce have taken Big Daddy from a commercial kitchen in Helena to Kyleigh Farm co-packing plant in Chancellor near Enterprise.

Thompson said being from New Orleans – a cooking town – it was something that was in him, but his desire to help his mother is what got him started cooking at age 6.

“I’m an only child,” he said. “My mother, who was working two jobs to take care of me, used to come home and just be flat out tired. So, I started out cooking breakfast for her and simple stuff in the evening for dinner when she comes in. It just kind of pick up from there.”

While the sauce can be found in Piggly Wiggly and other stores, Thompson still remembers and honors the beginning.

“We started out at Tannehill Trade Days, so each third week of the month you can find me there because my start was there,” he said.

Thompson would like to offer his own take on mustard-based and white barbecue sauces as well as rubs and spice blends. But he also has hopes of helping others who, like him, are making a great sauce at home with friends telling them they should bottle the stuff.

“My endeavor is to hopefully someday be able to help someone else who might have a sauce and couldn’t get it out there,” he said. “I didn’t just want to have Big Daddy Bomb BBQ and leave it there.”

Take home: Big Daddy Bomb BBQ sauce in a 10-ounce bottle to use on everything from chicken fingers to pulled pork.