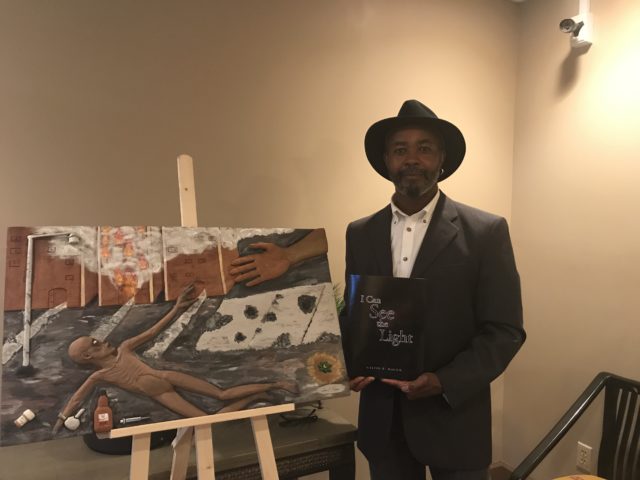 To this day, Calvin Macon regrets the condition he was in when his parents last saw him.

“I was struggling,” he said. “I had a house and I was married, but I was still struggling with drugs. My parents died within about a month of each other [in 2004], and then my uncle died. I remember my dad telling my mom when she was really sick, ‘The only reason I’m here is for you.’ He died shortly after she did.”

Macon said his father had diabetes and an abscess on his toe. He went to the hospital to have it removed, which resulted in a blood clot that led to his death.

Macon, 62, a retired U.S. Navy veteran, sculptor, and recent author recalled the day he was getting ready to smoke crack cocaine at home—then he saw the light and knew it was time to quit. That was six months after he lost his parents, and he has been clean for the past 15 years.

Resisting temptation hasn’t always been easy: “I can see a cigarette lighter and think about when I used to smoke, or I can be driving somewhere and think about it because there are so many places I’ve been around Birmingham where I would go and buy drugs and smoke it or whatever,” he said.

Macon’s faith in God’s redemptive power is much stronger than his urge to do drugs, though.

“I believe in God, Jesus Christ, and I always knew I was supposed to be doing something else. That’s how I ended up writing my book,” he said. “I wrote my book in like a week and a half. I had written a couple of poems before, but when I decided to do this, I did it in hopes that it would help somebody because if I can do it, then they can do it.”

Part of his trusting God meant he had to end friendships that were not good for him, he said.

“I had to cut people off because they weren’t real friends anyway,” he said. “They’re friends while you’re smoking, but you just have to let folks go and you can’t be around it.”

Macon said he focused on sculpting, which he has done since serving in the Navy from 1975 to 1999. While serving on his first ship, he hand-carved a sculpture out of a wooden pallet.

“After we got supplies, I would find pallets or … any kind of wood available, [such as] broom handles, to make mobiles, coffee coasters, pipe holders, whatever,” he said. “Then in 1997, I started [working with] stone. I was stationed in Japan, where I met a stone sculptor. He gave me a chunk of soapstone, and I gave him a piece of ebony. Since then, I’ve been [working with] stone.”

Macon said it usually takes a month to shape a piece. Though he has done work for others and some galleries, he now mostly creates works for himself.

Macon began writing his book last year. He was inspired by some of his sculptures and would write poems to go with the pieces, then decided to put those poems in a book.

“A word or a phrase [would come to me], then I would write a poem around that word or that phrase and put it on Facebook with a picture of my work,” he said. “People would tell me I should copyright [the poems and pictures I put on Facebook].”

Macon got in contact with a publisher about writing a book. A few weeks later, the vice president of acquisitions called and said they were interested. It took Macon about a week and a half to put together material for his recently released first book, “I Can See the Light,” a compilation of pictorial poems that accompany his sculptures and illustrate how he overcame his struggle with drug addiction.

“Some poems are related to a specific carving in the hope that the artwork will add texture to the poem. Some poems reflect my thoughts and feelings as an addict, [as well as] interactions with my family, friends, and other addicts. Some are based on [my] postaddiction reflections on the general revelation of God and how I see things today,” he said.

Recently, Macon recited some of the poems from the book at Bards and Brews, a poetry performance and beer tasting hosted by the Birmingham Public Library (BPL) at the Birmingham Museum of Art.

Macon grew up in Birmingham as one of eight children; he has four older siblings and three younger siblings.

“I was a middle child, so I was pretty much on my own,” he said. “The older kids got stuff and the baby kids got stuff, but I was in the middle, so I was kind of by myself most of the time. [Even] when I would come home from the military, no one would even notice.”

His father worked at the Greyhound Bus Station in downtown Birmingham and Dickey Clay Pipe Company in Fairfield. His mother cleaned houses in Mountain Brook.

Macon’s family grew up in the Acipco-Finley and Hooper City neighborhoods and moved to Hooper City by the time he was in fifth grade, which he began at Lewis Elementary School before transferring to Eagan Elementary.

“We had to change schools and went to Eagan, [where] we were one of two black families,” he said. “We had to fight our way home every day.”

Macon attended Phillips High School, where he was in one of the first few classes to integrate the school. After graduating in 1975, he enlisted in the Navy for advanced electronics.

“I was the only black in the class out of 50-something guys that went through,” he said. “There were plenty of black guys in the Navy, but they weren’t in advanced electronics or air controllers; they were on deck jobs and things like that.”

“The Navy had instructors riding on ships, so you could take some of your basic classes onboard,” he said. “The way the program is set up, you could take the classes, or you could take the tests if you thought you could pass. Then [your work would be] submitted to the university, which would give you credit. That’s the way I did it.”

For Those Who Suffer

Once he retired from the Navy, Macon returned to Birmingham and worked as a receiving manager at a home-improvement store. While working, Macon was a self-described “functioning drug addict.”

“I probably started using drugs in the 1980s, when I was still in the military,” he said. “When I wasn’t around it, I was fine. Whenever I would come to Birmingham, I would be in trouble until I could get back up to Memphis, [where I was stationed], and then I would be fine. Once I retired, [though], there was no control of it because I was retired and getting a check, and I had my own house, so it was hard.”

Macon started out smoking marijuana, eventually used cocaine and then crack cocaine. After retiring from the military, he was mostly using crack. When he realized he was addicted, he tried several ways to quit smoking the drug.

“I would carry only certain amounts of money. I couldn’t call anybody I would smoke with,” he said. “None of that worked until I just said, ‘Lord, help me, just help me!’ Somehow it worked, kind of like that let-go-and-let-God thing. [At the time], I didn’t know what that meant, but now I do. … I used to just pray for one day, for Him to just give me one good day to quit.

“It’s extremely difficult for people who smoke crack or use any other opioid to stop. They may tell themselves, ‘I’m just going to do a little bit,’ but you can’t do just a little bit. No one starts out to be an addict; they just get caught up in it. Once they’re hooked, the world collapses because they can’t get out.”

Macon was finally able to get out—and he knows his parents would be glad to see that their son has now seen the light.

“I Can See the Light” (Covenant Books) is available at Amazon and in bookstores, including Barnes and Noble and Books A Million. 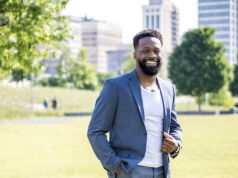