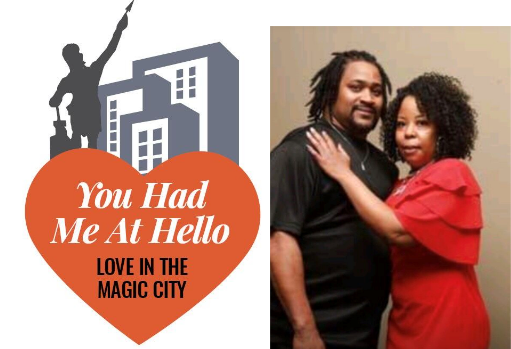 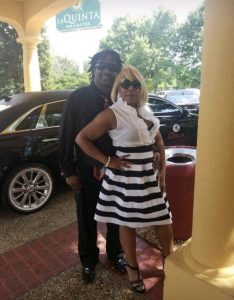 Met: May 1998 at Devin’s sister LaSonya’s college graduation party at the Evergreen Community Center in Birmingham. Erica was 19, and Devin was 27.

“She came with my cousin … When I saw her [Erica] I asked my cousin about her,” Devin said. “I had prayed to God that something positive would change in my life and she was it. I introduced her to all the family that night as ‘my girlfriend’, and I was thinking that she was going to be my wife. After the party we both went home and two days later I was at her front door.”

“We [her and LaShondra] were sitting at the table eating and Devin came up to the table and he just started talking and asking all these questions,” she laughed, “and I needed some hot sauce, so I asked him to go get for me, and when he walked away I told his cousin that [I thought] he was crazy,” Erica said. “He started introducing me to everybody as his girlfriend. He took me over to his grandmother and introduced me as his girlfriend, and I said ‘no ma’am, I just met this man”, but he didn’t stop, he was very persistent.”

First date: May, 1998, Devin prepared a midnight T-bone steak dinner for her at his house after work.  “I was surprised that he could cook, it was really good, and I come from a family of cooks… We talked about his children and he asked me how I felt about his kids, and I told him I have 27 nieces and nephews and they all grew up with me so I didn’t have a problem with children,” Erica said.

“The thing that got me the most was that when I told her about my [four] children, she was ok with it,” Devin said. “I was truthful and she was cool with it, and I knew then that I was going to take care of her forever.”

The turn: In 2003, Erica and Devin moved into their first home together on 16th Ave. in East Thomas. “We were already like ‘one’, we spent every night together because either I was at his house or he was at mine… but when we moved in together, that’s when we really became a family,” Erica said.

The proposal: August 2008. “I said ‘look here, I ain’t going nowhere. I talked to your mom and your dad and I got everybody on board’,” Devin said, “and then I dropped down on one knee and said ‘we got to do this, I want to take care of you for real. We’re living this life and we got to make it official. We’re going to get married on your birthday.”

“I wasn’t shocked but I wasn’t expecting it [at that moment],” Erica said. “But when he told me, I was fine with it. We had been together all that time and neither one of us was going anywhere, so I agreed, we might as well make it official. I was excited too. I liked the ring, I was happy.”

The wedding: At the Entertainment Center in Fairfield, officiated by Rodrick Callins, the colors were cream, teal and brown. The couple had planned to get married at the courthouse but changed their minds and got married at their reception where all of the family could witness.

Most memorable for the bride was a dance with her grandfather. “My grandfather had had a stroke, and [after that] he would never go anywhere, but he came to my wedding. And when we told him we were getting married, he told me he was going to dance at my wedding, and he did. My husband and one of my uncles got on each side of him like crutches and held him up and my granddaddy danced. It was so special because before his stroke, he was the type that liked to get out and have a good time,” Erica said.

Most memorable for the groom was all the family love. “It was helping her granddaddy dance and having all of our family there. Everybody was there in support of us. Our families came together and helped us make everything happen. It was really nice. People came out of the woodworks for our wedding and we had a great time,” Devin said.

Words of wisdom: “Being truthful, always keep the lines of communication open. Having free time carved out for each other. Love, I love him unconditionally. Always keep God and family first,” Erica said.

Devin said it’s important to have respect for each other and be willing to learn from others around you. “Tell the truth, don’t tell lies, be true to each other and yourself. We believe in each other. There are a lot of trials, tribulations and temptations out here, but you have to be strong. Don’t cheat yourself. And God is before me, keep him first and everything else will fall in line.”

Erica, 41, is a West End native and attended West End High School. She is a hair stylist at Connections Barber and Style in Birmingham.