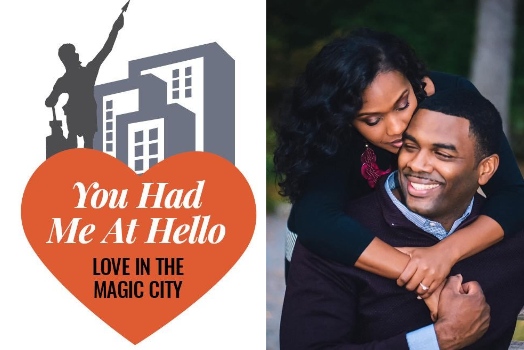 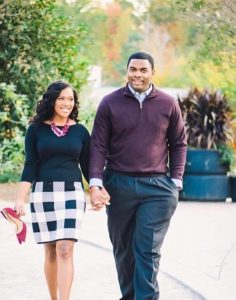 Met: August 2014, via Facebook. Leah lived in Knoxville, Tenn., and Antonio lived in Birmingham. “I was Facebook ‘shopping’ [sending] pretty girls’ friend requests, and I sent Leah one. Out of all the friend requests I sent out, Leah was the only one to accept the same day, and so, I sent her an inbox message,” Antonio said.

Leah recalls how forward he was.

“He said good morning, and before I responded I went to look at his pictures to see if he was cute… I responded three hours later saying ‘good afternoon’, and then he threw out a message saying ‘I noticed how beautiful you are, and more than that the beauty of holiness on you…,’” Leah said. “I was thinking oh boy, he’s going to be this extra deep person for no reason, I was thinking, just say ‘hey’,” she laughed. “We chatted back and forth for a few hours and one thing that really stood out to me during our conversation was his confidence.”

First date: September 2014, at John’s City Diner in downtown Birmingham. Leah came to [Birmingham from Knoxville] with her sister Leslie, who was visiting her fiance, and Leah tagged along so she could go on a first date with Antonio.

“I was honestly nervous because I didn’t know him outside of Facebook, and talking on the phone,” Leah said. “…I was wondering if he was going to be crazy in real life and try to put me in his car and drive off with me and I never see my family again,” she laughed. “But he wasn’t, it turned out to be the perfect date, he was definitely a gentleman, and he was looking so good. The night was fun, after we ate we went to Railroad Park and walked around. It was really a beautiful night.”

Antonio had no first date jitters.

“I thought she was beautiful, she actually looked better in person, her hair was perfect. I could tell she was a little nervous… I wasn’t, I was a debonair gentleman, and I was taught that I could get anything [I pursued], and I showed her I was the best choice.”

The turn: For Antonio, it was on a dreary day in 2015. “I had just gotten my Commercial Driver’s License [CDL] and I was having a really crappy day at work, and I was sitting in the truck contemplating … And she called to see how my day was going because she felt something was off with me. And I was thinking [Leah] is the one,” Antonio said. “To be 250 miles away and able to feel that something was off with me let me know this wasn’t just a happenstance or a passerby relationship. She was it.”

Leah remembers a spiritual connection “and I just knew I needed to comfort him. I felt something come over me, urging me to call and check on my man,” she said. “And in that same moment, I realized I’m really in love with this guy and I was thinking if there’s anything that I can do to comfort him, I want to be that for him.”

The proposal: April 2016, in Chattanooga, behind the aquarium on the Tennessee River. Leah’s parents were there also.

“We had gone to the aquarium that day, and I had us stop for ice cream because I had a spoon engraved [to say] will you marry me in the [scoop of the] spoon,” Antonio remembered. “I had the ring in my pocket… I was trying to get her to eat off my spoon so she could see it, and she was being really mean to me about it… then she finally looked at the spoon and read it, and by this time I was down on my knee and asked her to marry me,” Antonio said.

“I was beyond shocked,” Leah said. “I felt like a proposal would be coming, but with me and Tony, we had always been content in our relationship, we were not in a rush to get married, we were having a good time. I never would’ve thought that he’d propose that way. I started crying, my hands were shaking and I felt complete… It was absolutely beautiful. It was the perfect proposal.” 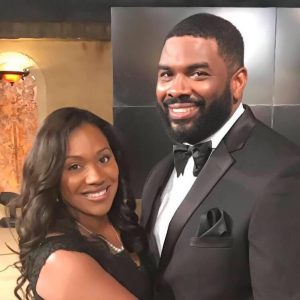 Most memorable for the bride was the moment in the ceremony where she and Antonio had a chance to talk and reconnect. “It wasn’t scripted, there was nothing else going on, the audience just kind of chilled while we talked to each other, and the first thing I said to him was ‘baby, why’d we start [the wedding] so late,” Leah laughed. “That moment for me was so memorable because all of the nerves and [pretense] was over, I felt like I was in my comfortable place and that was talking to my best friend…”

The couple honeymooned in Tampa Bay, FL. where they took a boat ride out to a private island which was the highlight of the trip, they said.

Words of wisdom: “Be open to accept that [you’re] not the same, but that some of their differences may help you,” Leah said. “Differences help you grow. You’re going to have challenges when you first start living together [because] you’re not the same person. You love each other and you made a vow, so you’re going to work through them together…”

Couples can have two different opinions and neither one of them be wrong, Antonio said.

“You can learn to create compromise and no one will be losing out on anything,” he said. “Also, love is not enough, you have to have some practical life skills that go beyond love, because you gotta love on days [we’re] not being very lovable and remember your commitment that you made before God and man.” He added, “You have to understand that you’re not going to feel like you did the day you got married every day . . .but on days you don’t feel the love, you have to go back to your skill to deal with life and love, and act on love even when you don’t feel in love.”

Happily ever after: The Consenta’s have a 21-month-old son, Antonio Jr.

Leah, 36, is a Knoxville, Tenn. native, and West End Academy [Knoxville] grad. She attended the National College of Business and Technology in Knoxville, where she studied business administration, and works from home as a customer service rep for Esurance.

Antonio, 35, is a Pratt City native and a Holy Family High School grad. He is a truck driver for Mapco Express, and serves as assistant pastor at Family Life Center Church . During COVID-19, Antonio continues to drive for his company.