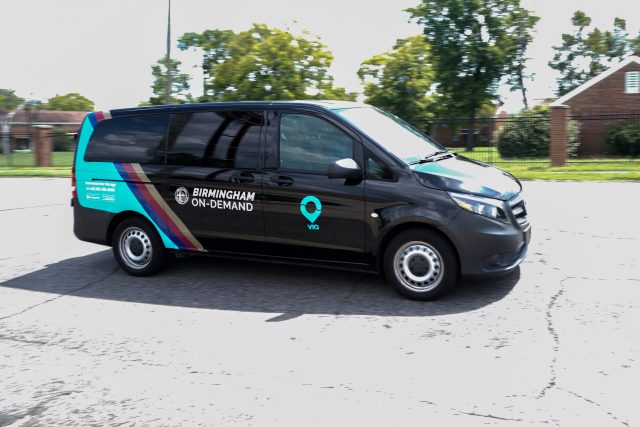 Getting residents to and from work, doctor’s appointments, and grocery stores is one of the city’s top priorities—and its fiscal 2020–2021 budget contains money to continue the Birmingham On-Demand ride-share service, a program both city officials and residents have spoken highly of since it was launched in December of last year.

Birmingham On-Demand is a transit ride-share service partnership with Via, a mobility solutions company that provides on-demand and pre-scheduled transportation for residents in cities around the world.

“The biggest challenge for us was to continue the program, and Mayor Randall Woodfin’s proposed budget does that,” said City Councilor Darrell O’Quinn. “The next challenge for us would be to expand the service zone. … Unfortunately, we’re not able to do that at this time with the current budget shortfalls, but it’s something we ultimately want to work on.”

The pilot program for the service was planned for six months, but it was extended after the city moved its fiscal year from July 1 to October 1 because of the COVID-19 pandemic. Cuts were made to the budget because of a $63 million shortfall but not to Birmingham On-Demand, which had its funding increased from $502,000 to $740,000.

Birmingham On-Demand has been popular with riders like Jeremy McNair, who uses a wheelchair and turns to the service to get to work and other places throughout the downtown area.

“I just recently used it a few days ago to go to a barbershop on Fourth Avenue North, which I can do quite often now that I know [Birmingham On-Demand runs] on Saturdays,” he said.

Even O’Quinn said he has found value in the microtransit, or demand-responsive transportation, service: “I used it one afternoon after a council meeting. My car was in the repair shop over in West End, so I was able to use [Birmingham On-Demand] to ride from City Hall to West End to pick up my car.”

“Stories like that that happen multiple times every day with the service [provided by Via],” he added. “It is something that is extremely convenient and affordable and helps bridge a gap for folks.”

“It gets [riders] back and forth from their jobs, as well as to and from doctor and other appointments that they otherwise would not be able to get to because of cuts to some of the routes by other services,” he said. “This is an addition to the transportation [available in the city], and I think there is a need for it to continue.”

Birmingham On-Demand, which uses marked Mercedes Metris vans and also provides accessible vehicles for riders with disabilities, operates Monday through Friday, from 6 a.m. to 8 p.m., and Saturday, from 10 a.m. to 8 p.m.; riders can book a shared ride for a flat-rate fee of $1.50.

“The mission of [Via, established nationally in 2012], is all about creating efficient and affordable solutions for public mobility,” said Olivia Blahut, the company’s partnership manager for the Southeast region of the United States. “We’ve been operating for eight years, and today we work with more than 100 different cities and transit agencies, universities, private transit operators”—and the city of Birmingham is just one of Via’s many partners.

The Birmingham On-Demand pilot service officially launched on December 3, 2019. The service zone covers a 6.7-square-mile section of the city, which includes the downtown Intermodal Facility, the University of Alabama at Birmingham (UAB), City Hall, the CrossPlex, Children’s of Alabama, the Jefferson County Courthouse, and other city and county offices downtown Birmingham. Neighborhoods served by the program include Smithfield, Graymont, College Hills, Bush Hills, Rising West Princeton, East Thomas, Fairview, and portions of Southside.

“We also were focused on making sure the service was accessible to all types of riders,” Blahut said. “Rides can be requested through a mobile application on a smartphone or a telephone number for riders who don’t have access to a smartphone. … A credit card can be used to pay for the service, but we also offer options for riders who don’t have credit cards or bank accounts, so they have a way to access the service.”

Birmingham On-Demand has six vans and about 20 drivers. More than 300 rides were share during the first week of the program, Blahut said. Originally, a shared ride would include six passengers, but because of the pandemic only three passengers are allowed in a van for a shared ride. The service averaged about 1,000 rides a week through the first three months; since the pandemic, it averages about 500 rides a week.

Blahut explained that the program monitors not only the number of rides but also where riders go and the access they have to different resources in their communities.

“When we take a look at some of the destinations people are traveling to, we see places like grocery stores, medical facilities, and the Intermodal Facility among the most popular,” Blahut said. “That tells us the service has been a key way for riders to access critical resources, whether that is nutrition, health care, or regional transit options. I think those things are always important but have become especially important since the onset of COVID-19, and we’ve been happy to say that we’ve been able to continue to operate.”