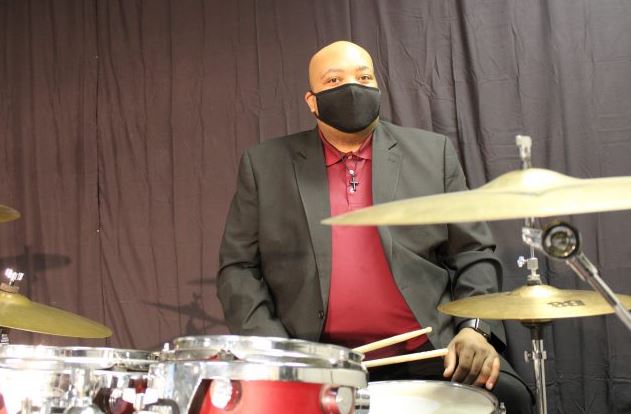 Chris Seltzer, owner and CEO of the Freestyle Percussion Foundation, knows the importance of good teachers, music, and structure on the life of a child.

“There were so many opportunities for me to sell drugs or join gangs, but because I had band directors and people who were invested in what I did and where I was going, I didn’t want to do those things,” he said, adding that finding an outlet, whether it’s drums or dancing—both of which are provided through his nonprofit—is important for helping kids stay on track.

Seltzer founded the Freestyle Percussion Foundation, located in Birmingham’s Center Point neighborhood, in 2004 after brainstorming about a place where young people could go to learn how to play drums.

“We’ve had students who are just in bad situations. Some of them felt hopeless,” he said. “I had one student who came to me and told me they wanted to commit suicide because of the things that were going on in the home.”

Students like that child have benefitted from the program. Seltzer, 44, is pleased with the young adults have grown through the sessions, which initially started with percussion classes of 10 to 12 students.

“All the high school students I’ve had who wanted to continue doing music have gotten scholarships to different colleges and universities. That is something I’m very proud of,” he said. “It teaches them that they can do something they love and make a career out of it. There are better ways to live, [and they don’t involve] selling drugs or picking up a gun and joining a gang.”

“You build on [the fundamentals] and teach them more complex rhythms,” he explained. “Also, reading music is important for them to get scholarships. Sometimes the kids just want to get in there and play a song they like, but this helps them with school. I always use myself as an example. I started off with the basics and, in the end, I got a full scholarship. I tell them they can do the same or better.”

Seltzer, who grew up in Birmingham’s Ensley community was never a stranger to music.

“My dad played drums. I started around 2 or 3 years old, when I could finally reach the drum set. My mom was a singer. My oldest bother played baritone, and my older brother plays the trumpet,” he said.

Seltzer’s passion for percussion began when he played for his first jazz band.

“The first time I played was at the Civic Center for a wedding reception or some kind of party,” he said. “My dad was the regular drummer for the band, but he had to work so I filled in for the first hour and a half. I had to be no older than 8.”

Even then Seltzer said he saw himself teaching other people how to play drums. “Throughout school, I was always the section leader. The band director would tap my shoulder and ask me to work with the other drummers,” he said.

Initially, Seltzer attended Ramsay High School, but he begged his parents to let him attend Ensley Magnet High School instead.

His parents agreed, and Seltzer graduated from Ensley in 1995. He went on to attend Alabama Agricultural and Mechanical University (AAMU) in Huntsville, Alabama, where he pursued a Bachelor of Arts degree in music education to pursue a career in teaching.

“I was in the marching band, jazz band, the wind ensemble. We did a percussion ensemble. I also played with the symphony and performed in the Magic City Classic,” he said.

Seltzer left AAMU in 1999, during his senior year, and moved to Georgia after he married his wife, Marketta, who was enrolled at Southern Polytechnic State University.

“I went to Kennesaw State University to finish my music degree, but then I had my son, [David], and my daughter, [Charity], so I had to work,” he said. “When I first got [to Georgia], I worked for [a supermarket and a package-delivery company]. Then I took a position with the Department of Family and Children Services in DeKalb County. It was important for me to support my family, so I didn’t get a chance to finish my music degree.”

Marketta finished school in 2002, and the Seltzers moved back to Birmingham.

“All Things Through Christ”

Seltzer never gave up on his education, though. In 2020, he graduated with a Bachelor of Arts degree in psychology and Christian counseling from Liberty University.

“In my prayer time, listening to God, he told me to go toward psychology instead of music. One of the things they teach us in psychology is to focus on hope. When you’re teaching kids how to play music and teaching them the fundamentals, there should also be a time when you’re just talking to them about life,” he said.

While music and psychology seemed worlds apart, Seltzer realized that the two go hand in hand.

“Dealing with children, they have a lot to say [about] stuff that was going on in their homes, dreams they had, people in their lives who tell them they can’t do anything,” he said. “A lot of times, older adults won’t listen.”

Being a mentor for those kids was important for Seltzer.

“I’m able to tell them, ‘You can do all things through Christ which strengthens you. You are not a failure. No matter what people tell you, you can do it.’ It’s amazing to see their faces change, the change in their demeanor when they hear those words,” he said.

While interacting with young people, Seltzer came up with the idea for the Freestyle Percussion Foundation.

“At the time, I was the assistant band director at Huffman High School,” he said. “At first, I started a company [with friends], but later on God told me to do it by myself.”

“When we had our first music camp, there were about 30 students in attendance. Now I do lessons with about 85 to 90 students a week,” he said.

The COVID-19 has posed some challenges, but Seltzer has adjusted.

Remote percussion classes don’t work well, he said, so “we all social distance, wear masks, and sanitize our hands. The private lessons are one-on-one, and it’s a big space. The drumline can be outside, too.”

During private, one-on-one lessons, Seltzer said he focuses on the fundamentals: “how to hold the sticks, the different notes in music, basic scales on a xylophone. I also teach drum set techniques, such as jazz and rhythm and blues.”

In addition to providing private lessons, the Freestyle Percussion Foundation has a drumline—the Freestyle All-Stars.

“I start them off in one-on-one lessons, then they can move to the drumline because the group is a little advanced. It’s a full-fledged line with tenors, snares and bass, cymbals, all of that,” Seltzer said. “We compete and do performances. We’ve done them at Disney World. We won first place at a competition in Michigan City, Indiana. We marched at the 50th Bloody Sunday [commemoration in March 2015] in Selma, [Alabama], when President Obama was there. … We’ve done a lot.”

Seltzer encourages all kids, regardless of gender to get into percussion, but his organization has a dance team, as well—the Explosive Freestyle Diamonds, a combination of a drumline and a dance team. The coach is Andrea Smith-Holmes, who is the dance and cheerleading coach at Lawson State Community College, and the dancers range from ages 6 to 18.

“We’ve had very good girl drummers come through Freestyle, but I wanted to have another outlet for girls,” he said.

In addition to running the Freestyle Percussion Foundation, Seltzer currently works with the A.G. Gaston Boys and Girls Club in Birmingham’s Five Points West neighborhood. He also has big plans for his organization.

“I want to open a full-functioning art school, similar to the Alabama School of Fine Arts, but with technology and sports,” he said. “It’ll be called FAITH Academy—FAITH is an acronym for Freestyle Arts Institute and Technology of Hope. We’re already looking into lesson plans and what we need to do to open as a fully accredited school. It’s a process, but I know I’ll see it in my lifetime.”