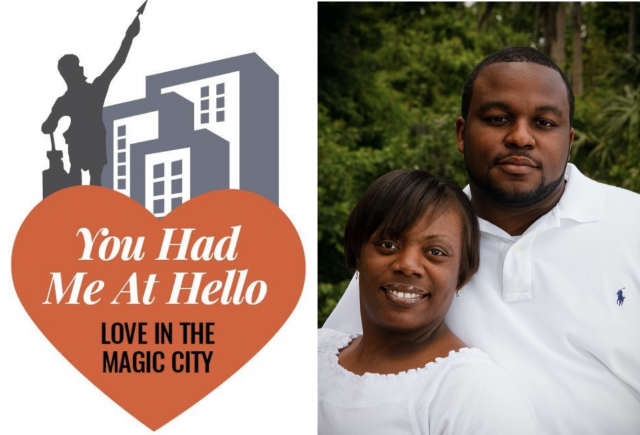 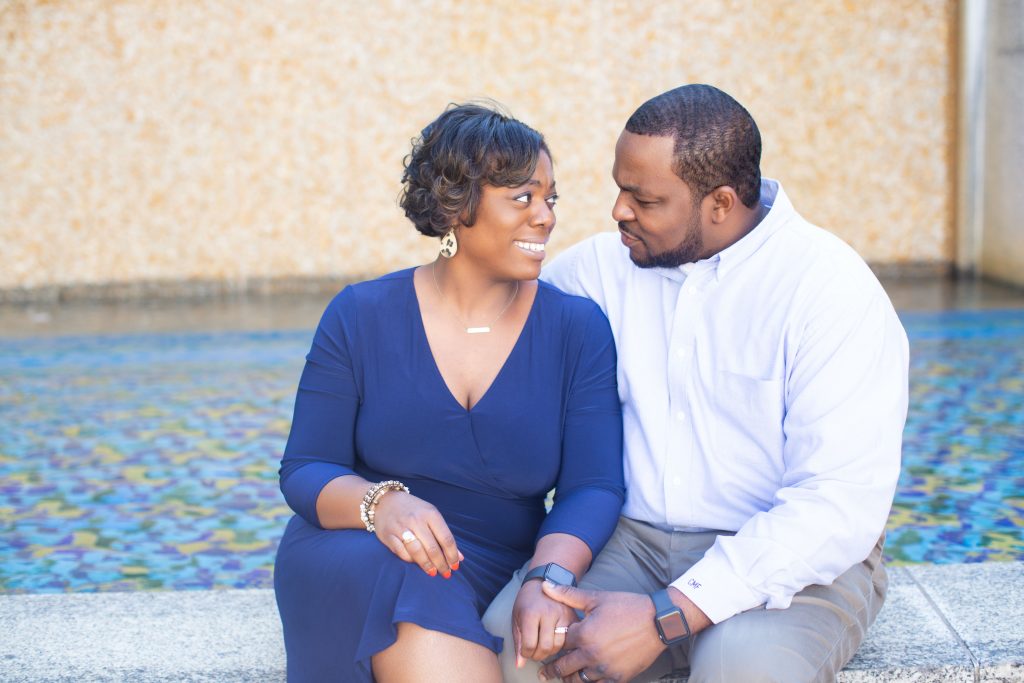 Met: Fall 1989, at Winterboro Elementary School. Cherith was in fourth grade and Cordell was in fifth. “We were just friends up until [Cherith’s] sophomore year [of high school], we shared the same friends, went to the same places, but one day after football practice I was standing on the wall in the gym talking to my friend and I saw her run by and I said, ‘do you want to go out with me’, and she looked at me like I had three eyes. It took four or five rounds before I was able to get her to take me seriously.”

“I actually was dating someone else, so I was really interested in pursuing that relationship, but I was open since he was so persistent,” Cherith said. “Cordell was one of the good guys in the school. One that you wouldn’t have to convince your parents to let you go out with– head on straight, good grades, responsible.”

First date: Spring 1995, Cherith was Cordell’s date to the junior prom at Winterboro High School [Alpine, Ala.] “and it was my first date ever,” said Cherith.

“I was so excited, and I was very shocked that I got to go because my dad did not play, I thought he wasn’t going to let me go anywhere… I remember us going to eat at O’Charley’s in [Oxford, Ala.] and it was the first time I was in the car with a boy by myself, going to dinner with a guy and the prom, I was on cloud nine. It [her happiness] really didn’t have as much to do with him as it did being able to be out,” Cherith laughed. “If I was a teen now, it would’ve definitely been all over snap chat.”

Cordell remembers driving a brand new Jeep Grand Cherokee from the car dealership where [Cherith’s] dad worked. “I remember him making it crystal clear what time she needed to be home, he was not playing, so I remember getting her home 30 minutes earlier than that,” he laughed. “I can still remember the black dress she wore, she was so beautiful that night. I was so in love with her, I actually let her drive the car… luckily she was a good driver.”

The turn:  For Cherith, it was Spring 1997; she was given an ultimatum by Cordell during her senior year in high school at Winterboro High. “He went off to college first and was already at Auburn and I wanted to go to Alabama, but I remember him telling me that he was not interested in continuing a long distant relationship, and that if I went to Alabama [their relationship would come to an end] . . . so here I was going to Auburn,” Cherith said.

For Cordell, it was summer 1996. “I went to Marine Corps boot camp in Parris Island, South Carolina, and we had been writing letters back, and forth and boot camp really gives you an opportunity to reflect… …and when her parents let her come with my parents to my graduation, after being away from home for three months, I was ecstatic to see her,” Cordell said. “I realized she had been spending time with my family . . . she had literally become a part of my family.”

The proposal: Spring 2000, in Auburn at Cherith’s apartment.

“I had gotten the ring and convinced her roommate to put the ring out while [Cherith and I] left and went to the grocery store… The ring box had a light inside [that glared] when you opened it, so I had her roommate turn off all the lights and leave the ring box open on the counter so that when we walked in the apartment Cherith would see it. When we walked in, Cherith spotted the little light and as she got closer to it, she saw what it was and she melted,” Cordell recalled.

“I was totally shocked, and I do remember walking back into the apartment and seeing the light and going over to inspect it, and when I turned around he was on one knee,” Cherith said. “I was happy, I said, ‘yes.’”

The wedding: At Cherith’s parents’ home in Talladega, officiated by the late Reverend William Threatt of Africa Baptist Church in Talladega attended by their parents and grandparents. Cherith wore a cream suit, and Cordell wore his grandfather’s black suit. They had a reception at her parents’ house the following day.

Most memorable for the bride was a speech Cordell made during the reception. “…I can’t remember all of the words but I do remember him staring me cold in the eyes and telling me he would take care of me forever and he has done just that …,” Cherith said.

Most memorable for the groom was when we walked in and were greeted by all of our family I was finally able to introduce [Cherith] as Mrs. Fluker to my grandparents and [friends and family]. Getting that warm welcome from everyone, and her family treating me like I was their son, was a good feeling.”

The honeymoon came five years later when the couple honeymooned in St. Lucia– “It was our first time out of the country and we fell in love with the culture,” Cherith said.

Words of wisdom: Trust, provision and security are important for a woman, Cherith said. “I know that Cordell is going to take care of me, from the big things to the small things; he’s always been my provider and my protector, I don’t ever worry about anything because I know he’s got it,” Cherith said. “He has our daughter just as spoiled, he does everything for us… he’s always the first person I call.”

But as with any marriage there is love in good times and in bad “and we don’t ever try to pretend that either one of us has never wanted to give up,” Cherith said, “but we have never wanted to give up at the same time. When one wanted to throw in the towel, the other was fighting for us, you have to figure out how to make it work your way. [For example,] We figured out early that sharing money didn’t work for us, so he has his account, and I have mine, but we come together to make sure our family finances are well taken care of.”

Cordell said, “We just keep working at it. . . We have found a way to communicate and keep working together; a team is truly what we are. Instead of trying to force our relationship into a mold, we accept each other for who we are and I love that about us,” Cordell said.

Happily ever after: The Fluker’s have two children, son, Jordan, 20, and daughter Kaylen, 18.

Cherith, 42, is a Talladega native and Winterboro High School [Alpine, Ala.] grad. She attended Auburn University where she earned a bachelor’s degree in English, Jacksonville State University [Jacksonville, Ala.] where she obtained a master’s degree in science of education, and Samford University where she obtained a doctorate of education. Cherith is an Instructional Specialist for Jefferson County Schools and recently published in Chicken Soup for the Soul: I’m Speaking Now and runs a self-care and lifestyle blog at www.whatcherithinks.com.

Cordell, 42, is a Talladega native and Winterboro High School grad. He attended Auburn University where he earned a bachelor’s degree in science industrial and systems engineering. Cordell is a department leader at Honda Alabama auto plant, in Lincoln, Ala.