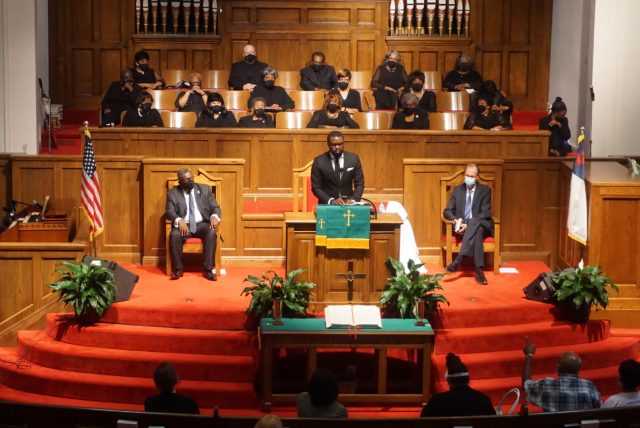 On a rainy September morning, 58 years to the day after four little girls lost their lives in a horrific church bombing, Birmingham solemnly remembered.

“We are catching some rain this morning. It is as if nature is grieving with us…58 years ago these hallow walls were fractured, not by bombs or gun powder or fire…but they were fractured by an anemic Christianity and lovelessness,” said Rev. Dr. Charlie Dates, senior pastor at Chicago’s Progressive Baptist Church, who delivered remarks inside the church on Wednesday.

On Sept. 15, 1963, at 10:22 A.M, a bomb set off by members of the Ku Klux Klan exploded killing 14-year old’s Addie Mae Collins, Carole Robertson, Denise McNair, and 11-year-old Cynthia Wesley while also injuring scores of other worshippers inside the church.

Dates spoke about how “lovelessness” cost lives, but how love can save lives.

His message was “about how God is love and how to love is to be in God’s glory. If the people who planted the bomb in the church acted in love…those lives we lost may have been still with us today. If we acted in love in this current time, maybe the issues we are experiencing as people wouldn’t exist or be as significant.”

“Imagine what we can accomplish…imagine having a better place in 2021 if we turned the anger that we have into activism and advocate for some better things.”

Melinda Price, a Birmingham native who attended the commemoration, was 13 years old when the murders happened.

“It was the worst thing you could ever imagine,” she said. “It’s a memory I will forever live with. Imagine hearing on the radio a church exploding…killing people so young around the same age as you.”

In closing, a memorial wreath of pink, white, and green roses and lilies were laid on the east side of the church where the bombing took place.