On Monday, the Birmingham Jefferson County Transit Authority’s Board of Directors named Charlotte Shaw as the agency’s next chief executive officer, pending a contract agreement, according to AL.com.

Shaw, who will become CEO on October 4, is overseeing the construction of the city’s Bus Rapid Transit System (called the Birmingham Xpress), replaces respected transit industry veteran Frank Martin, who joined the BJCTA as a consultant in December 2018

In an unrelated move, the Birmingham City Council, last week, voted to allocate $18 million to Birmingham Xpress bus rapid transit (BRT), a public transportation system made up of buses that uses exclusive traffic lanes and priority signaling at stoplights to increase reliability.

“I think [the BRT] is going to change one’s quality life because these buses can now get there and get there on time,” said Steven Hoyt, who chairs the council’s transportation committee.  “That’s important for residents who need to show up on time for doctor’s appointments or work. You don’t know what it is to have a doctor’s appointment and you’re 30 minutes late . . . or late for your job and you might not even have a job,” he said.

Construction of the Birmingham Xpress is supposed to be finished in early 2022, before the World Games which will begin on July 7 the same year.

The additional funding for Birmingham Xpress will come from the $140 million in federal dollars the city has received through American Rescue Plan. 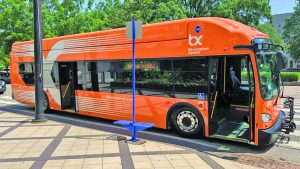 The issue of extra funding came after considerable debate during last week’s meeting. It was originally brought up Aug. 17, at a City Council Committee of the Whole meeting, when Shaw gave an update on the project.

During that presentation, Shaw requested $14 million from the council and said the current state of the construction industry is a “perfect storm,” with costs “escalating tremendously.” She and her team reduced the cost by about $3 million by cutting out parts of the project like the priority signaling, which synchronizes stoplights based on bus location to increase reliability and reduce wait time for bus riders.

“I think that it’s important that we don’t spend all of this money to create just another bus service,” he said. “I think we need to be really intentional that this is really a bus rapid transit service.”

The original plans for the Birmingham Xpress were estimated to cost $44 million, so the extra $14 million proposed by Shaw would bring the total cost to $58 million. The priority signaling costs so little at $1.1 million in comparison to the total cost of project it makes no sense to remove it that instead of the $14 million that Shaw proposed, Williams suggested the council up the funding to $15 million to account for the priority signaling.

Hoyt agreed with Williams during the committee meeting but said they should give enough money, so that city planners do not have to cut out any aspects of the Xpress project.

“I really don’t think that we need to take out anything that we had for this project. I think we need to fund it in its entirety because this really says much about who we are as a city,” Hoyt said.