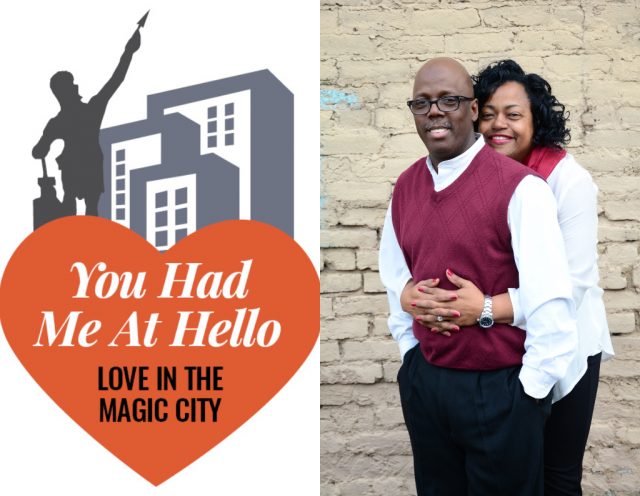 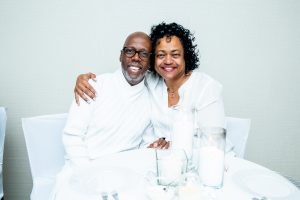 “I finally put my marbles away,” Edna laughed. “I had attended a high school football game with my older cousins and [Ronnie and I] got hitched up that night through one of our mutual friends, Angela (Nixon) Drummer.”

“At the football game we walked and talked and ate popcorn while we watched the game,” Ronnie recalled. “I was thinking ‘don’t mess this up’. In my mind, since I was young, I thought she was the one and only person for me so I tried to make sure that she was happy.”

“I was strategizing trying to figure out my next step and how I was going to keep her happy,“ Ronnie continued. “They lived about 15 miles from me, so I was thinking about the task it was going to be trying to get up there in those woods to see her.” They both lived in Greensboro, just 15 miles apart.

“There were no buses or public transportation available, and I lived ‘up in the hills’ in the rural parts of Greensboro, and Ronnie lived in the city,” Edna said.

Ronnie figured it out. He would pay his friends or brothers to take him to Edna’s house “in the woods” and her family welcomed him into their home. In 1978, Ronnie turned 16 and got his first car and they went on their first official date.

First date: In Tuscaloosa at the State Fair. Edna’s parents gave her permission to go with Ronnie “because they trusted him, he came from a solid Christian family and my mother loved him. She just didn’t know that he was always trying to get kisses,” Edna laughed.

“He was so interested in winning me a stuffed animal playing the midway games [ring tosses, dart throwing], that he ran out of money. And I was egging him on too, telling him ‘one more time, one more time’, and [after a while] Ronnie reached into his pocket and said I don’t have any more money and we needed gas to get home. So I had to find one of my cousins to borrow five dollars… I realized then that he would be the perfect husband because he would do anything in his power to make me happy,” Edna said.

Ronnie said, “I really didn’t think about the money at the time, I just had my eye on the prize, so when I ran out of money it was a little embarrassing, but I knew I had to do what I had to do and swallow my pride and ask to borrow money from her cousin to at least get a gallon of gas in that big old car. I had a Buick Electric 225 …,” Ronnie said.

The turn:  In 1984, upon his return from Germany. “I was in the military [U.S. Army] and I had spent two years in Augsburg, Germany, and on my return, I went to visit her at the [University of Alabama] where she was in school and it wasn’t a pleasant greeting. I guess time had drawn us apart in those two years, so we separated for a little bit.”

“When he came back from the military and he came to visit me, I gave him back the promise ring he gave me before he left; that’s why he said it wasn’t a pleasant meeting,” Edna said.  “A couple months later he bought a Pontiac Fiero sports car, and you know how girls are about cars, he came up there [to UA] and he wooed me. That night we talked a lot, and I realized how much I did love him, and it didn’t take long for me to realize he was the one.”

The proposal: Over the phone in December 1984. Edna and Ronnie were talking from her dorm room phone at UA, and Ronnie was talking from the military base at Fort Gordon in Augusta, Georgia.

“We were discussing the things that we had gone through in our relationship and the time and distance that we had spent apart and finding that we still loved each other. So I said, ‘til death do us part, why don’t you just marry me?’,” Ronnie said.

“And I said ‘really?’ And he said ‘yes’, and I said, ‘ok’. It was real simple. He came home for the holiday a couple of weeks later and gave me the ring,” Edna said.

The wedding: In Greensboro (Hale County) at Union Grove Baptist Church, officiated by Ronnie’s twin brother, Lonnie. Their colors were red and black.

Most memorable for the bride was “the first time I used the word husband, I remember where I was standing in the church,” Edna said. “I heard somebody say where’s Ronnie, and I said ‘where is my husband? Wait, that sounded pretty good, let me say it again’,” she laughed.

And, “my brother gave me away at my wedding, and he owned a limousine company and drove one of his limos from Detroit, Michigan, to Greensboro, Alabama to give his little sister away. He was so proud of me, and I remember getting in the limo and thinking about everything, how special that was, and how much gas money it must’ve cost to drive that limo all the way from Detroit (12-hour drive). That was a sacrifice, and it meant a lot to me,” Edna said.

Most memorable for the groom was watching as his bride “begin to walk down the aisle, and just seeing how beautiful she was,” Ronnie said.

The newlyweds honeymooned in Forsyth, GA. “We were on a shoestring budget, and we ate at Wendy’s!” Edna recalled.

Words of wisdom: “Regardless of who you’re with, you make sure you really love that person because it makes a difference in the relationship. It allows you to overcome a lot of things. That principle that ‘love hides a multitude of faults’… it’s easy to let go if you don’t really truly love that person. Not just any ole kind of love, true love. It’s different and you’ll know it,” Ronnie said.

Edna said, “Put God first and make sure you choose your mate with God, He is the head. And don’t try to change the person and turn them into something or somebody else. If you need to do that you don’t need to be in a relationship with them,” Edna said.

Happily ever after: The Weavers have two children, Jonathan, 31, and Ashleigh, 28.

Edna, 58, is a Greensboro County native, and Greensboro East High School grad. She attended the University of Alabama (UA) where she earned a bachelor’s degree in electrical engineering, and the University of Alabama at Birmingham [UAB], where she earned a master’s in business administration [MBA]. Edna is a manager at Alabama Power where she helps supervise the transmission project management team.

Ronnie, 60, is a Greensboro native, and Greensboro East High School grad. He served seven years in the US Army in the supply unit and owns a Birmingham-based courier service, RLW Courier Service.

The Weavers are members of The Greater Shiloh Missionary Baptist Church in Birmingham, where Edna serves on the women’s and intercessory prayer ministry, and Ronnie sings in the choir.