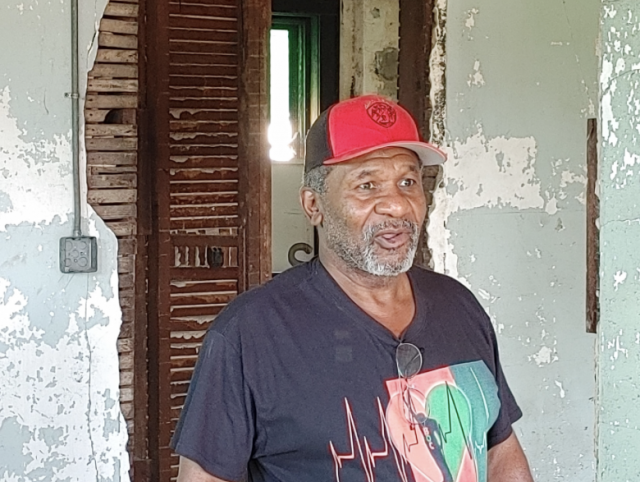 On a crisp Saturday morning in the Smithfield community, Arthur Williams is leading a class in an abandoned building. Williams is explaining to a group of teens how they can transform that dilapidated structure into living conditions for a family.

Williams, a civil engineer by trade, has been teaching construction skills to a group of about 20 teenagers in Birmingham and said it’s a profession Blacks aren’t filling like in the past.

To teach the teenagers, Williams has purchased the vacant home in Smithfield neighborhood. One house in Inglenook has already been completed and is being rented out at an affordable price, he said.

Williams is president of the Alabama chapter of Brothers on Campus Inc., which was founded at Illinois State University in 1974 as a Black-centric alternative to college fraternities, and he oversees the organization’s pilot mentoring initiative Brothers of Character, which includes a variety of educational, training and other programming.

He wants to make sure young men coming out of single-mother households in Birmingham are given mentorship and job training from men in the community.

“I have seen that the boys that we don’t catch, they end up…being babied by their mothers, and when it comes a time when they need to get out and get a job… they don’t want to work, so I saw the lack of getting out and doing for yourself, because I don’t like to say this, they didn’t have any men in their lives to guide them to be a man,” Williams said.

Williams said he is working on a partnership with the Alabama Associated General Contractors (AGC) for t teens who come through the program to jump straight into apprenticeships after high school, instead of going to trade school.

“If you’re getting a trade while you’re in high school, after you get out of high school, you don’t need to go to a trade school and pay that money,” Williams said.

And, if learners in the construction mentoring program still want to attend college, having trade skills will give them a leg up, he added.

“You have guys that take carpentry, end up being architects,” he said. “You have machinist in the trade school end up being mechanical engineers. They have a path, and they have an option, and they can always make money…even while they’re in college. If they have a trade, [they] always have opportunity because of [their] hands.”

Williams, 62, grew up in housing projects on the South Side of Chicago, IL with two brothers, Cecil and Cornelius, two sisters, Constance and Leshone, and his parents Arthur Sr. and Freddie.

Being the oldest and growing up in the projects, Williams said he and his siblings had to be tight.

“When you grow up in the projects you had to stick together because people always trying to conquer, so my dad taught us, ‘If anybody touch one of y’all, you better jump in. I don’t care if it’s just one-on-one, you jumping in. Don’t nobody touch your brother or your sister,’” Williams recalled.

Williams said he and his family also took part in the Model Cities program, a federal social services program which operated in multiple cities throughout the U.S. from about 1966 to 1974. Through the program, Williams said his mother became a teacher and his father a police officer.

“Growing up in the city of Chicago, it was rough. You had to stay away from the gangs, and that was the purpose of Model Cities was to bring all the gangs together and the non-gang members and entertain them with sports and the programs that they had,” Williams said.

He wants to model the Brothers of Character program after Chicago’s Model Cities programs, which included tutoring and training for trade skills.

“I’m trying to implement that back down here by working with these young men, trying to eliminate the pipeline to prison…Kay Ivey [is] building two prisons, and those prisons are for us, our young people, so I’m trying to catch them at a young age and steer them away from that,” Williams said.

He has some familiarity with the criminal justice system. Williams also owns two homes in the city, one in Inglenook and another in Rising-West Princeton, which he rents out to those fresh out of prison.

Williams, who said he’s been renting out the properties for about four years, said he was given the idea for the affordable rental units by a friend from Ensley’s Faith Chapel.

In addition to renting to the formerly convicted men, who Williams said deserve a second chance, some of the men have helped out in mentoring boys in the Brothers of Care (BOC) program.

“[The men] need the opportunity to start their lives over. They are good mentors because they can teach the boys what not to do and keep them out of the prison life,” Williams said.

Williams was exposed to multiple trades through the Model Cities program then went to Dunbar Vocational High School in Chicago and studied auto mechanics before starting off his engineering education at Alabama Agricultural and Mechanical University (AAMU) in Huntsville.

Williams only stayed at AAMU for one year before returning home to attend Illinois State University (ISU) in Normal, where he went on to graduate in 1982, with a bachelor’s degree in engineering and industrial management.

It was at ISU that Williams first joined Brothers on Campus in 1979, only five years after the organization’s founding.

Williams, who was on a football scholarship, was attracted to the mostly athlete-founded organization which focused on Black empowerment.

“The brotherhood and Black guys working together and becoming a family, that’s what attracted me, and I was an athlete. It was a lot of athletes out of the 14 brothers that founded the organization,” he said.

After graduation, Williams worked in the Chicago public school system, first as a substitute teacher than later a math teacher for third through sixth grades. In 1988, he left for Atlanta, GA, for a job with a Black-owned engineering firm.

“Richard Arrington asked a group of us to come to Alabama to try to duplicate what they were doing in Atlanta,” Williams said.

Following Arrington’s request, Williams said, his engineering company opened an office in Birmingham where he became vice president of business development and manager for the new office.

Williams, who now lives in Irondale, has three children, Antoine, Arthur III and Artdesha. Arthur III, 31, is a high school teacher in Texas, and Artdesha, 25, is currently working for the U.S. Department of Justice while pursuing a law degree and Antoine, who would be 40 this year but died in 2008.

Williams said he would like to expand his work by purchasing more properties at which he can teach young men in Birmingham construction. For information on how to join as a mentor or sponsor, go to https://www.brothersoncampusbham.com.