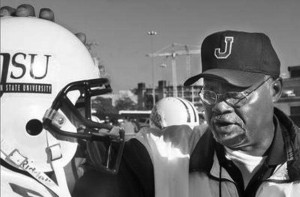 JACKSON, MS – Former Jackson State football coach, Robert “Judge” Hughes passed away last week following complications of diabetes. Hughes, who has been in and out of the hospital over the last several months, will be remembered by JSU fans as one of the great football players and coaches in the history of Tigers football.

In 1999, Hughes was named as JSU’s 15th head football coach. In his first season, he led the team to a 9-3 record. That season JSU won the Southwestern Athletic Conference Eastern Division title and played Southern in the Inaugural SWAC Championship game in Birmingham, Alabama. The game was played on December 10 in front of a crowd of 47,621 fans (the largest crowd ever to watch a SWAC championship football game) at Legion Field. The Tigers fell 31-30 in a heartbreaker to the Jaguars.
The following season, Hughes’ Tigers finished with a 7-4 record and matched that 7-4 mark in 2001. 2002 was the final year that Hughes led the Tigers and the team finished with a 7-4 record. During his four year coaching career at JSU, Hughes finished with a 30-15 record (.667 winning percentage).
During his tenure at JSU his teams won a SWAC Eastern Division title, set the NCAA D-IAA (now FCS) record for highest passing efficiency rating in a game (389.9 rating by Mark Washington vs. Alcorn St. in 1999), was named NCAA Rushing Defense Champions (allowing only 67.8 rushing yards per game in 1999), was named NCAA Passing Champions (averaged 344.4 passing yds per game in 2001), set single game passing yards mark (Robert Kent passed for 668 yards against Alabama St.) and was named the NCAA Total Offense Champion (the team averaged 485.5 yards per game in 2002).
As a player, Hughes was named to the JSU All-Century team in 2011 as a defensive lineman. Information regarding funeral services for coach Hughes will be made available upon receipt.