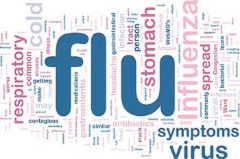 BIRMINGHAM, Ala. – Scientists and flu researchers with the University of Alabama at Birmingham and Southern Research Institute shot down five common but wrong flu myths this week during an influenza seminar sponsored by the UAB Department of Anesthesiology and the Pulmonary Injury and Repair Center.

The presenters, Diana Noah, Ph.D., and James Noah, Ph.D, virologists at SRI and adjunct faculty in the UAB Department of Biochemistry and Molecular Genetics, used evidence, common sense and humor to squash five flu myths that never seem to go away.

On average, the flu kills 36,000 people and sends 200,000 to the hospital each year. Groups at increased risk include those ages 65 and older, people with chronic diseases, infants, people with poor immune systems, pregnant women and nursing home residents. “So, even if flu is ‘no big deal’ to you, if you are infected with the flu virus you can easily help spread the virus to someone in one of these groups,” said Diana Noah. “The cornerstone of prevention is the flu shot.”

Myth #2: Vaccines can give me the flu.

“The basic flu shot uses inactivated virus, which cannot transmit the flu,” said Jim Noah. “Side effects are soreness, redness, swelling, low-grade fever and aches that may last one to two days, but this is a normal reaction to any vaccination. It’s not the flu.” Noah says the flu shot is approved for use in people older than 6 months, including people with chronic medical conditions.

Not true. “Vaccination with the 2012-13 flu season vaccine reduced the risk of flu-associated medical visits from H3N2 viruses by one half and from flu B viruses by two-thirds for most of the population,” said Diana Noah. The vaccine is designed to be effective against the flu strains most likely to be encountered in a given year. Flu patterns, including the strains reported from the Southern Hemisphere where the flu season is some six months ahead of the Northern Hemisphere, are analyzed so that vaccines best match the actual strains. And the vaccine is usually effective against three or four different flu strains. “Vaccination rates are crucial to outbreak management,” said Jim Noah.

“The risks from getting flu far out way any risk from the vaccine,” said Diana Noah. “Pregnant women are more prone to severe illness from flu and have a greater chance for serious problems for their unborn baby, including premature labor and delivery. Flu also is more likely to cause severe illness in pregnant women than in women who are not pregnant. The flu shot has been given to millions of pregnant women over many years. Flu shots have not been shown to cause harm to pregnant women or their babies.” Noah does say the nasal spray vaccine should not be taken by pregnant women.

Myth #5:  It’s too late to get vaccinated

“Anytime during flu season is the right time to get vaccinated, said Diana Noah. “Typically, the U.S. influenza season occurs from October through May, with peaks in November and February.” Some people are at high risk of developing serious complications, such as pneumonia, if they get sick with the flu, including people who have certain medical conditions including asthma, diabetes, and chronic lung disease.  Also, pregnant woman and those ages 5 and younger — and especially under 2 — along with those ages 65 and older.